Alison Tieman has written a response to the last post. As a follow-up, I am going to post it here for your reading pleasure.

1) “Sometime in Oct-Nov of 2014 is when Alison seemed to have jumped onto the GamerGate band wagon.”

Date: September 26th. In fact we were involved in GamerGate from August onward. This is just the first video that mentions it in the title.

This video talks about Anita Sarkeesian and feminist infiltration into gamer culture and aired Nov 6, 2013. In effect we were talking about GamerGate before gamer gate.

2) “So with all that being said, Off Alison and the Honey Badgers good, fully funded by patreons and supporters.”

As mentioned in the original fundraiser. I, Alison, Mike and Karen funded our own travel. I arranged my own accommodation with family in order to pay for the accommodation of the others through the fundraiser. 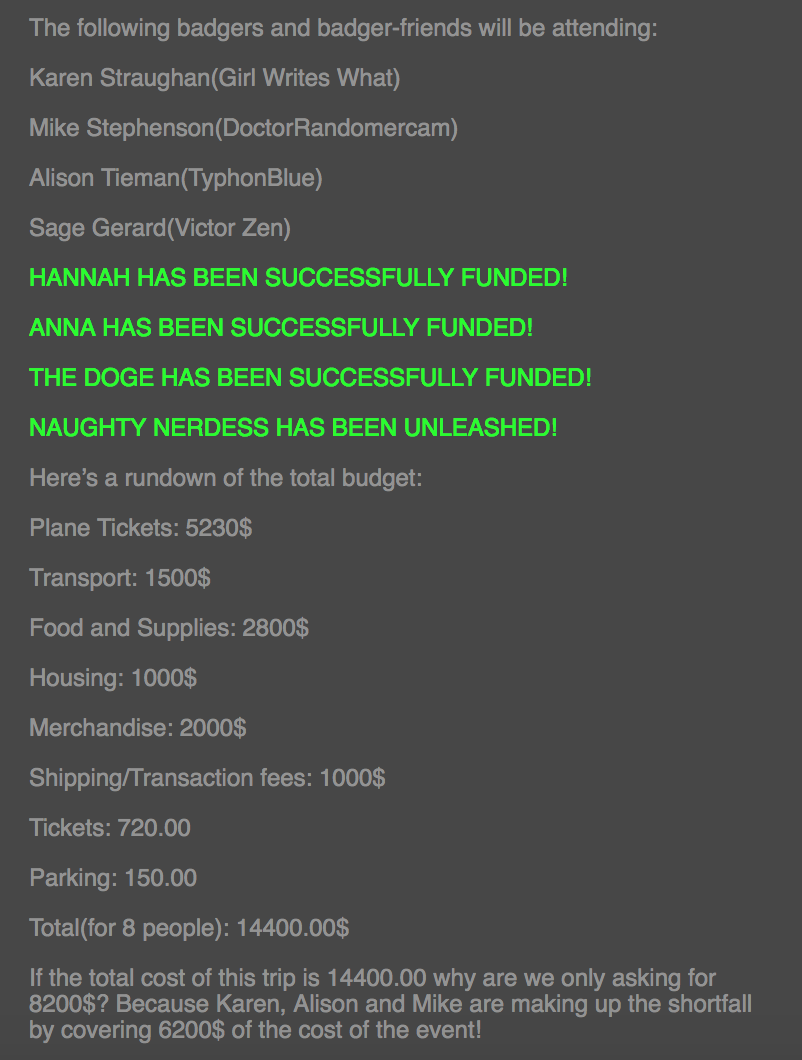 3) “About 18-20 minutes in, after a panelist was struggling to make a comment about MRAs, Alison interrupts, asking to field a question from another member of the audience.”

The question was from the panelists. Which is obvious in the recording.

4)”And Alison has admitted that she’s never been to a comic convention before and It’s a bit different from going to a men’s rights conference.”

This is link to a timeline on our case that has been available publicly since near the beginning. 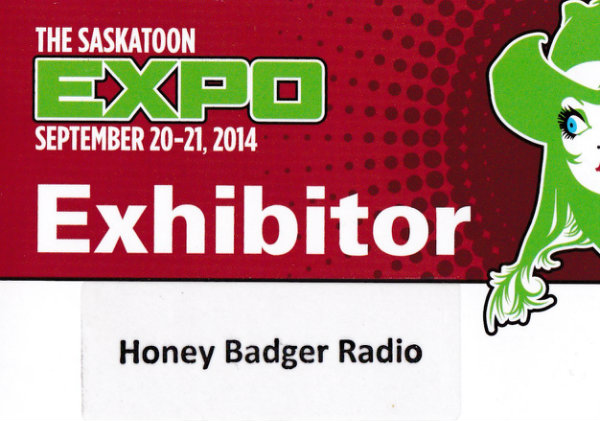 Notice that it includes my exhibitor pass for the Saskatchewan Expo in 2014.

5) “Dean Esmay would be someone to talk to when it comes to covering the Start of the Honey Badgers and how Alison … behaved,… when it came to participating in the First Men’s Rights International Conference.”

I wasn’t originally going to go. Dean Esmay attempted to get us to attend with a promise of a booth since we would attract fans to the event. Eventually we paid for the booth as his promise had caused contentions with the other organizers.

6) “Even if Alison was given permission to “field a question” this was not her platform to speak on, especially since what she had to say went against the “narrative”.”

It doesn’t constitute harassment or even an “interruption.” This was admitted by the Convention Operations Manager _during the trial_.

7) “Usually covered in this would include controversial or provocative material, to which I can point to the GamerGate banner.”

Which you created Penina. Furthermore many people don’t think the GamerGate logo is provocative or controversial.

8) “Support for her Comic skyrocketed (if only briefly) but most of the support came in the form of new patreons, more fundraisers, and an increase in shows per week.”

Our patron did not go up after this event. It took several months before it started to recover in fact.

9) “HBB prior to Calgary Expo did no more than 2-3 shows a week. After the CalEx incident they’ve increased their shows to now 4-5, sometimes 6 a week.”

Because we have increased the number of people creating content.

10) “If she violated the contract she would have signed before exhibiting at CalEx, then she has no case.”

And yet an Alberta Civil Court Judge has already ruled we do have a case. See all the documentation of the case on the timeline.

11) “I found out via another MRA that it was he who has floated the idea to Alison about purposefully getting kicked out of CalEx.”

He floated the idea and my reply was a polite “I’ll think about it but here’s why it’s a bad idea.” He even said it was “worth a try” meaning he knew the answer was “no”. I thought it was a profoundly stupid idea. 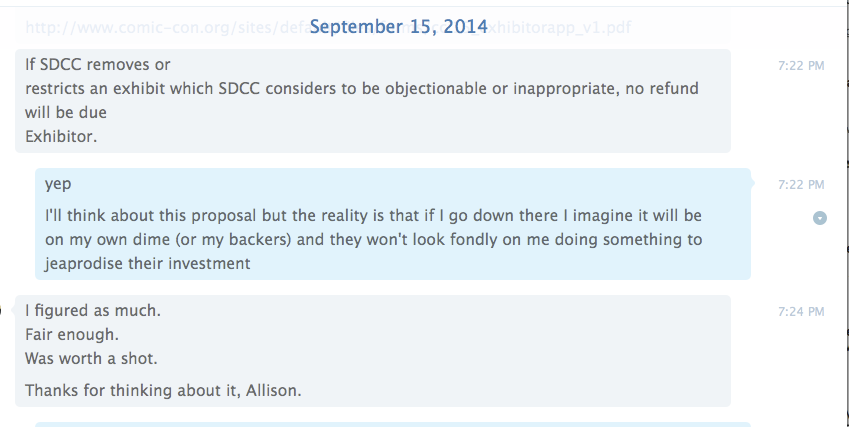 12) “According to Alison, he is able to practice in Alberta, but he is disbarred from practicing in all other districts in Canada. Why?”

Because Alberta doesn’t have the same rules. In fact I credit him for getting us this far at what most people who’ve involved themselves with the court system realize is a low cost.

13) “However, this house, as stated on their previous fundraiser was supposed to house Brian, Karen, and Dr. RandomerCam, and then held another separate fundraiser to stock it with appliances and equipment.”

It’s not going to house them permanently, but it will house members of the team when we work on joint projects. As it stands it’s a studio space and a place where I can warehouse our patron and fundraiser rewards as well as ship and pack them.

16) “So the question is Where is all the money going if it’s not being used for these other expenses?”

See each individual fundraiser for budget breakdown and see our patron for the monthly show costs.

17) “Now coming back to the “money”. I never asked Alison for payment, not even after I started having my suspicions, I kept that to myself. She approached me, and offered to pay and asked me what I thought would be a fair price. At first she offered royalties off each sale of the shirts I had made. I didn’t trust Alison to be honest about the number of sales, so we negotiated back and forth on a flat rate, both of which we agreed upon a final amount. If you would like I can provide screen shots of our conversations.”

So I paid you for what you originally offered for free because I wanted to potentially use it for more merchandise that we hadn’t agreed upon initially. That’s definitely the mark of a shyster.

18) “It wasn’t too long after Alison has paid me for the artwork, since she was doing this before she became a Corporation.”

We became a corporation in August 2016, 8 months after you were paid.

19) “Alison is motivated by promotion, which leads to more patreons, which is more $$$.”

And yet I didn’t bring up the name of our fundraiser site during the entirety of the stream. And I only brought up Honey Badger Radio once, when I was asked to introduce myself.

20)  “It is about the ethics of Alison Tieman, and recent examples point to not being very ethical.”

21) “Why did she change her exhibit from just her comic to bringing in the other members of Honey Badger Radio?”

22) “If her motivations were purely to cause enough trouble, as was suggested to her.”

And I shot down.

23) “Why would I have made the GamerGate badger banner if I thought she was going to be malicious with it…Why was I doing this? Simple. To warn others. Nothing special or deep about it.”

You made the banner to warn others?

24) “It’s Alison that owes her viewers and her patreons an explanation.”

They have one, whenever they ask.

25) The screenshots in the original post are to logs of the admin chat. Here’s a link to searchable documents (and the screenshots) from all the logs from that chat to see the context regarding the remuneration of volunteers.

27) Our budget, also available on Patreon.

Please see all fundraisers for individual one-time project break downs. All income over and above expenses goes to business savings to ensure HBB’s future operations. Honey Badger Brigade is incorporated in Canada.

Incidentally we’ve just started to be able to work on a series devoted entirely to direct financial aid to men in trouble. It’s called HBR Help.

As for the rest, yes, some of us drink, some of us do drugs and some of us have sex. And Anna Cherry does get naked a lot. My husband has taken artistic nudes of her on a beach, but not at my father’s place! And there are no 4 million dollar townhouses in Calgary.

Finally, Rachel reported doing 5 hours a week. The lowest of all the volunteers. Brian was doing 20-30 hours a week. I couldn’t support everyone (still can’t) so I made a decision to support the hardest working volunteer. Rachel even agreed that it was fair at the time.