How I Came to Reject Modern Feminism

People often ask me about how I came to be anti-SJW, anti-feminist, or whatever you want to call it.  The story is kinda long, so I usually don’t get into it. But I was thinking of column ideas for today, and this sounded pretty good. So, I figured, “Why not?” I’ll try to keep it as concise as possible, so you can get out of here within a decent time. Still, it’s gonna be a bit longer than my normal hits…

I’ve always been an avid follower of politics. I can’t remember a time when it didn’t fascinate me, until recently. I grew up a liberal, and still am (although disenchanted). But I never focused on the feminist wing of the party. I did get into the drug war and it’s surrounding issues, like it’s disproportionate impact on minorities, and the poor. But the feminist lobby never really held my attention. The only notable thing I ever saw them involved with was abortion, and that’s not a motivating issue for me. So, I guess I kind of ignored them.

There is one thing that does motivate me, though, and that’s the freedom of speech. We all have differing opinions on what it means, but I’m pretty much a free speech absolutist (although, as I said, I don’t believe doxing and/or criminal activity has anything to do with that). What really made me start paying attention to the modern feminist agenda was when they started flexing the political clout they had gained over the years in ways I hadn’t noticed previously. This has now been turned into a well-oiled machine, but it was just starting to become fully established at the time.

The radical feminists began to take on comedians who told jokes they thought were over the line. Growing up a huge fan of comedy as well as politics, this really pissed me off, and still does. The job of a comedian is to push buttons, and step over the line. The best ones have always done it. Is it funny, or not? That’s the only thing they should be concerned about. Nowadays a comedian has to constantly be on the lookout for an enraged lynch-mob. Often times, these are comprised of feminists.

Around this time, I saw Don Imus get run out of MSNBC. That affected me greatly. I was a regular viewer and knew that he said fucked up shit all the time, but he said those kinds of things about everyone. He wasn’t being racist, he was being an asshole for laughs. The same liberal and feminist commentators who came on his show for years, deserted him when his time of need arose. Zero loyalty. This is also common. People are scared to stand up to the professional grievance machine, lest they get destroyed by it as well. It’s much easier to just throw your friend under a bus and get a new one.

During this period, I was also a college student. My major was political science. As part of my degree requirement, I had to take one semester of “women’s studies.” I was dreading the class, but on my first day, I found out that the teacher was smoking hot. OK, so she was still full of shit, but I figured that this would at least make it a little more bearable.

It did, at first. The class itself was easy as hell. You didn’t actually get graded normally. If you did the assignment, you got full credit. There was a paper at the end, but it was similarly scored. I can’t tell you much about the paper, though, because I never made it to the end of the course. One day, Professor Bell, the “conventionally attractive” instructor, told the class about extra credit opportunities. One of them involved attending a lecture in the “Women’s Studies Center” here at USC Upstate. So, I went.

The event was described to me as a question and answer session, but when I got there, it was more like a lecture. At several points I tried to calmly interject. I didn’t come there to sit passively, after all. I came there to debate the issues. This did not go over well, to say the least. I was silenced and told that I would have a chance to speak at the end. OK, fair enough. But when the end came, I still didn’t get to ask any questions. In fact, they ended up trying to have me forcibly ejected by campus police after I told them that my tax dollars and tuition contributed to the room they were sitting in. I ended up leaving before the police arrived, because I’m not an idiot. Discretion is always the better part of valor.

They didn’t stop there, however. I ended up having to go to a disciplinary hearing just like the ones you read about the feminists gaming all the time. This one was no different. Although I had a respected professor testify for me, and had the statements of several students, I lost. I was put on a year of “behavioral probation,” and sent on my way. Nothing ever came of it, but the process has been burned into my mind forever.

Dr. Bell wasn’t the main one behind trying to punish me, but she co-signed the whole thing. Where is she now, you ask? 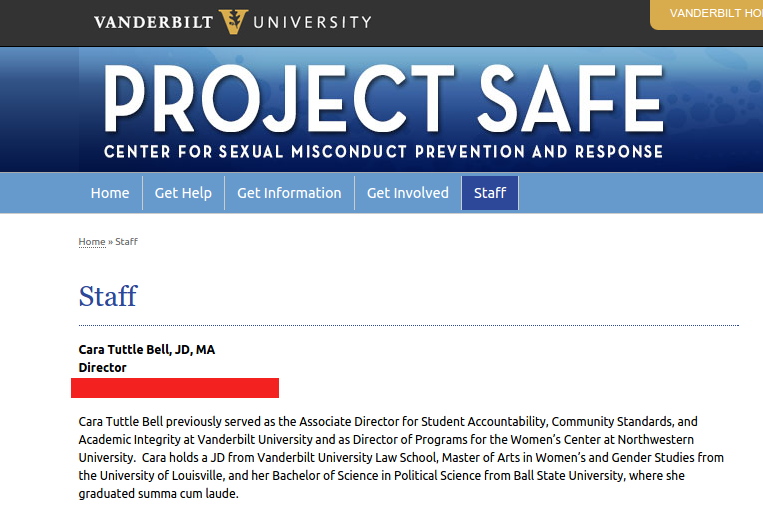 She’s moved on to bigger and better things, as you can see. But not everyone came away unscathed. The old Women’s Center at USC Upstate was shutdown by the Republican Legislature in South Carolina due to a dispute over their activities. As much as I hated what they did, I didn’t support that, because of its heavy-handedness. But that doesn’t mean I shed any tears when I saw the former director, Lisa Johnson, get shitcanned. It was pretty amusing, I must admit. The same person who bullied me, got their center fucked right out of existence. Karma…it’s real.

All this happened years before Anita Sarkeesian came onto the scene. When they started creeping into my gaming hobby, I knew we were in for a decades-long battle against these bastards on every cultural issue imaginable. Being a professional victim pays very well, and you can do it for life. I can see why someone like Anita would get into her line of work. But the core of modern feminism is rotten and authoritarian. They aren’t interested in real debate. We’ve seen that a million times just over the last six months. It took a confluence of events to motivate me into full-time activism. GamerGate is in many ways the culmination of my journey. Radical feminists finally pushed too fucking far, and I won’t stop until I see them defeated.