How SJWs Think: The Fundamentals

We’re all familiar with the crybullying behavior of SJWs by now. We’ve seen the no-platformings and ritual denunciations and high-profile media lynchings and destruction of livelihoods and criminalization of dissent from people who curl up into a fetal position and demand safe spaces if you stand up to them with so much as a dot reply. We’re familiar with how they can see “rape culture” in a piece of burnt toast, and swarm unsuspecting people to demand apologies for the slightest perceived “problematic” behavior, while approving everything up to and including child molestation in their own allies. We’ve seen them attacking members of “marginalized” groups with utter ruthlessness when one dissents in the slightest from what they’re told to believe.

This is the behavior characteristic of totalitarians, those who believe your every thought, your every waking moment, every aspect of your life, should be dominated by and assimilated to their political narrative.

But why do they behave this way? Isn’t being a totalitarian just a lot of work and stress? Well, the immediate reason is that, like all totalitarians, they are pushing a narrative that conflicts with observable reality, and they know it. Getting people to submit to their narrative therefore requires preventing them from acknowledging reality. This requires that the false narrative be constantly pounded into people’s minds everywhere they go, and that they be prevented from reflecting and thinking rationally about it, because if they are left to their own devices, they will naturally see what’s right in front of their noses, and reality will be allowed in to destroy the narrative. As such, EVERYTHING in your life needs to be turned into propaganda for the narrative – the video games you play, the books you read, the comedy you watch, the radio you listen to, the people you associate with – ALL of it. You must be given no respite, no rest, nowhere to escape to even for a moment, because any sort of escapism is likely to allow you to entertain thoughts that conflict with the narrative, that recover your sanity and reorient you to reality.

But what would cause somebody to want to push a narrative that they know is false onto everyone else? What’s at the root of these twisted freaks’ mania? Let’s dig down to the core…

Every SJW has something that they’re deeply ashamed of, something that makes them feel guilty or insecure, and this is the key to understanding everything else about them. You may have noticed that our enemies have enough skeletons in their closets to fully replenish the world’s oil supplies if they were underground – from pedos, to sibling sex-assaulters, to literal shit-eaters, to guys that think that rape is funny, to pedos, to guys that fail to report rape, to trannies that sleep with men without disclosure, to pedos, to women who abuse their boyfriends, to virulent racism, to pedos, to general all-around sociopathy – nearly all of these people’s lives are complete and utter trainwrecks, and this is no coincidence.

Of course, nearly everyone is ashamed of something, so that doesn’t explain SJWs all by itself. SJWs are made by how they deal with it. There are a lot of healthy ways to deal with shame, depending on the underlying reason for it. You can seek to improve your habits, you can repent and make amends to people you’ve wronged, you can seek forgiveness from God, you can realize that it’s nothing to be ashamed of and come to terms with it, you can find some escape to help you cope, etc.

But SJWs deal with it in the worst way possible, and that’s the factor that makes them SJWs. The SJW seeks to rationalize away their shame by pinning the blame for it on everyone else. “There’s nothing wrong with me,” they tell themselves, “I only feel bad because society has oppressed me with it’s arbitrary, regressive norms. In fact, I’m more progressive and enlightened that everyone else for realizing this. They should be ashamed! I should be judging them!” 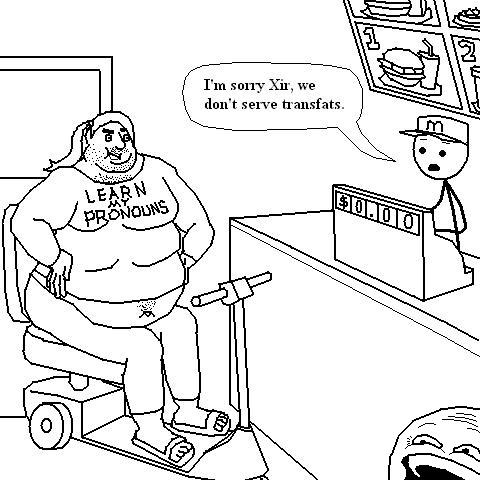 There are many difference sources of an SJW’s shame. Many of them are things they should rightly be ashamed of, but some aren’t. But regardless of where they start, once a person engages in this thought process, they begin their life as an SJW. And after attacking innocent people and lying constantly for just a short time, all SJWs rack up plenty of misdeeds to be legitimately ashamed of in short order.

Not Just A River In Egypt

In any successful functioning society, most of its fundamental norms are ultimately based in hard non-negotiable reality, otherwise it wouldn’t have achieved success in the first place or will soon cease to function. That means the SJW, in declaring society’s norms evil and arbitrary, must deny the reality they are based on as well. This means lying to himself on a regular basis about what’s right in front of his nose.

And the SJW can’t tell himself just one lie. In the words of Walter Scott, “Oh what a tangled web we weave when first we practice to deceive!” This applies to self-deception as much as any other kind. Telling yourself one lie quickly requires you to tell dozens more in order to shore up that first one, as more and more conflicts between the lie and reality present themselves. The SJW must continually mindkill himself to prevent reality from seeping in and unraveling the web of lies upholding his self-imposed delusions.

To take one common concrete example, a woman might feel ashamed because she’s unsuccessful at work and has no marriage prospects due to major personality flaws. Instead of taking responsibility for her own failures, she tells herself that her problems all stem from “patriarchal norms” creating discrimination in the workplace and placing oppressive relationship expectations on women. But she can’t stop there. There are inherent, biological differences between men and women which account for their differing workplace performance and what they look for in a mate, so to dismiss the “patriarchal norms” that arise from them, she has pretend that those differences are themselves illusions created by “the patriarchy” and that gender is a social construct. When people present proof that boys and girls are different from infancy, she must rationalize that even that is just the product of “patriarchy,” until she’s so thoroughly ensconced in her own lies that she finds herself advocating for brainwashing infants and bullying young children.

Pushing a narrative that flies in the face of reality is not a one man job, or even a one genderfluid transblack gopherkin’s job. You won’t get far insisting that the sky is beige when everyone around you just laughs in your face and points to the blue sky. To lie to yourself and others, you need allies – a unified mob all screaming the same false narrative and intimidating anyone who points out reality into silence. Only then might you be able to condition people out of their confidence in reality and coerce them into submitting to the narrative that there are five lights. The need for a mob to push a lie is the reason that radical left-wing movements like “social justice” are collectivist.

But where do you find a big enough mob? You aren’t likely to find a whole lot of people who share your belief that your feelbads are all the fault of society’s oppressive norms telling you you can’t swing your ladydick around in the girls’ locker room. Not that many women share your particular problem of having cheated on your boyfriend five times in two months for career advancement while believing it terribly sexist that most people don’t wholeheartedly approve. The number of multi-millionaires who believe they’re “marginalized” because bandaids don’t match their skin tone and the cafeteria puts too much cream in their soul food is probably just a bit short of a majority. Most men are not, like you, highly insecure cucks who have told themselves that the blue-haired landwhales they worship will sexually favor them when, come the revolution, “toxic masculinity” is overthrown and their libidos are no longer drawn to those awful muscled assholes with normal levels of testosterone that the patriarchy has tricked the fair porcine damsels into thinking they want.

But what if you could combine the people with those particular hang-ups together with every other shame-wracked malcontent with a hate-boner for Western Civilization into one giant mob of human dysfunction? Well, that is what SocJus is all about! 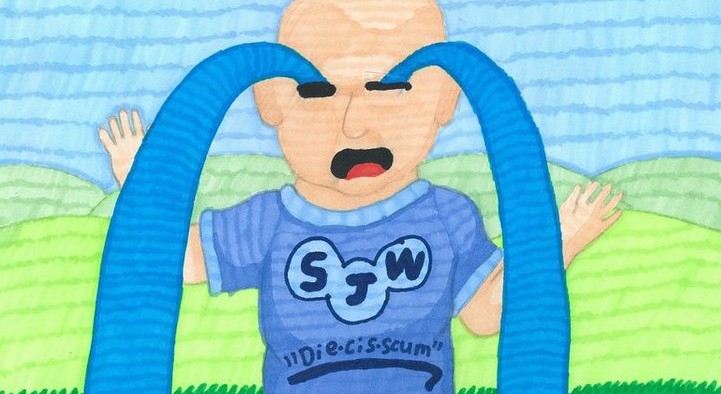 It works like this: Each person agrees to push everyone else’s bullshit in return for having their own bullshit pushed. So Fred the pedophile has no interest in cheating on his wife, and Ted the womanizer has no interest in diddling children. But Fred rails against “society’s unrealistic expectations of monogamy” and Ted waxes sympathetic about the plight of “ethical pedophiles” who are “marginalized” by “evil, uncaring right-wing zealots.” And both of them also rail against “patriarchy” and “white privilege” and “heteronormativity” and “cisnormativity” and “Islamophobia” and all the rest, and proponents of those causes take up Fred and Ted’s causes too.

SJWs actually have a term for this that you’ve probably heard before: “intersectionality.” Wikipedia defines it as “the study of overlapping or intersecting social identities and related systems of oppression, domination or discrimination.” It layman’s terms, it’s just all the self-deluding sad sacks getting together to push each other’s bullshit and form a combined rent-a-mob to tear down civilization with. 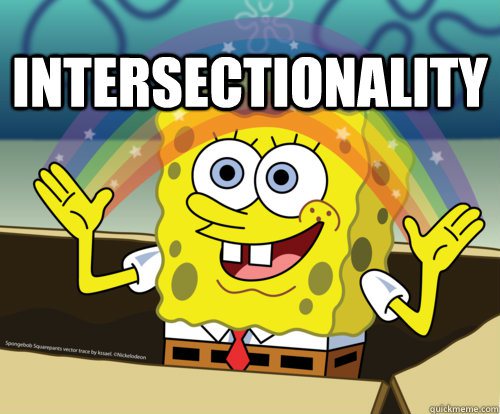 It’s clever in a way. Not only does “intersectionality” allow SJWs to form a bigger mob, it also allows each person in that mob to posture as a big damn hero who is altruistically “fighting injustice” on behalf of everyone else, when in fact they are tearing down society and attacking innocent people purely out of their own selfish spite.

As a result, the SJW ends up swallowing everyone else’s lies on top of his own. As each new group of delusional malcontents is added to the SocJus fold, it hurtles ever further towards wholesale intellectual and moral inversion, wherein every failure, every lie, and every evil is rationalized as good and praiseworthy, and all success, all truth, and all virtue is denounced as evil and oppressive.

What I’ve laid out here are the fundamentals of what passes for the SocJus thought process. The shame, the denial of reality, and the collectivism are the keys to understanding them. All their totalitarian behaviors follow like clockwork from these, and once you get them, all the bizarre things they do become comprehensible.

In a future followup, I plan to explain exactly how some of the specific things they do follow from this primer, so keep your eyes peeled. Got any questions? Put them in the comments.