I Never Should Have Given Suey Park a Chance. She’s a Fraud.

Two months ago, I wrote a post about Suey Park. She had made a big deal about getting away from the social justice warrior mindset and I figured it was worth writing up. The #CancelColbert mastermind was even coming across as somewhat genuine to your intrepid editor. Let me be the first one to tell you: I made a big mistake. I thought maybe we had another Ian Miles Cheong on our hands, when in reality, Suey Park is nothing more than another two-bit con-woman. Why do I say that now, you ask?

Well, the writing was on the wall back in September, when Park was getting rhetorically blown by infamous nutter Brianna Wu: 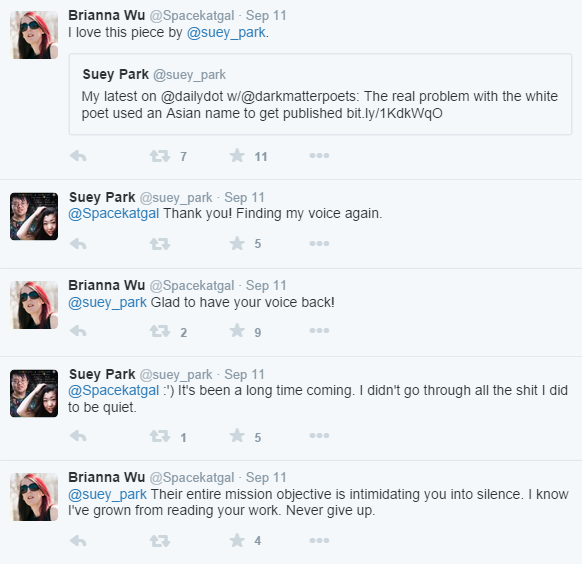 I resisted take a shit on her back then. I was even shown how she’s all about the money. Still, I held off from writing a post. I thought maybe she was just hard-up for cash, and after all, appearance fees aren’t totally unheard of. It did leave a bad taste in my mouth, though:

Then we come up to the current day, with the most recent evidence that Ms. Park was full of shit when she talked about getting out of the social justice racket:

I don't want a guy who covered up a rape anywhere near campus. #StopRapeCulturehttp://t.co/0KuQLO81IA#GamerGate pic.twitter.com/2LxMQ2VfIA

That’s right. Suey is going on tour with Arthur fucking Chu. They’re not doing it out of the kindness of their heart, either. It’s all about the money. Also, they’re using Google’s trademarks. I don’t understand how they’re getting away with that shit. Hopefully some attorneys are looking into it as we speak. I know they wouldn’t let do it. I guess you gotta have the right kind of politics.

Honestly, it’s not even about the money. I don’t care about people trying to make a living. It’s the flip-flopping and dishonesty that has me up in arms. I actually kinda fell for this fake’s act, too. That really burns me up. I guess that’s what I get for taking her words seriously. Even so, I don’t regret giving the nutty fucker a chance. No more free rides will be forthcoming, though. Suey Park is a complete fraud, and to me, all this proves it. To those who told me I was wrong, I gotta say, you fuckers were right.