I Smell a Rat With Star Citizen

For a week or so, I’ve been trying to think about how to approach the article I’m about to write. Honestly, deep industry machinations aren’t really my forte. It just doesn’t interest me as much as commentary, media analysis, and spotlighting hypocrisy. Still, I’ve read most of the reporting coming out of all this, and so I wanted to come here and say a few words on it. I’m still going to look at it from the overview angle, because as I said, the minutia doesn’t get me going.

I know Liz Finnegan, The Escapist reporter who broke this story. We’ve worked together a little bit, although we don’t speak regularly. She was an early supporter of GamerGate and that’s how I came to know her. She was always forthcoming during our interactions. I can honestly say that she was always a pleasure to deal with. The first time I really got to talking to her, was when we commiserated about St. Jude Children’s Hospital, which I never forget to remind people is located in my hometown of Memphis, TN (I consider myself as having two hometowns. The other is West Memphis. Weird, I know). In short, she’s a really cool person. That was confirmed when I met her in-person at #GGinDC.

Liz “quit” GamerGate a long time ago. She no longer uses the hashtag. Even at #GGinDC, she was just there to meet some of her friends and acquaintances from her earlier days organizing under the tag. But even if she was still GamerGate…so what? I’ve seen lines like these used in the past and they’ve always been employed in order to throw shade on legitimate criticisms:

“Bandit” is an anonymous account that was created on August 11th of this year and is almost exclusively used to aggressively attack and harass folks seen as enemies to Gamer Gate – the usual targets are all there, as are the usual proponents being retweeted. It’s notable that this account was interacting with and supporting Derek Smart when he was complaining about being blocked and reported as a harasser by two huge GG targets; Randi Harper and Briana Wu…

If you look at the Twitter history of Liz and “Bandit” they frequently retweet each other’s tweets and generally reinforce each other’s views / opinions. I don’t know Liz’s personal life (nor do I care to) but based on the picture of her in “Bandit’s” tweet it is not a stretch to assume there is either a close relationship between Liz and “Bandit” or they are potentially one and the same…

As for “Bandit,” I can tell you that he and Liz Finnegan are not “one and the same.” I write that with 100% certainty. When I see someone peddling a known falsehood, like Star Citizen “Chairman” Chris Roberts did here, my head tells me they might be lying about other things as well. When they threaten to sue a member of the press into silence, my faith in an entity’s truth-telling capacity falls even further. That’s just what “Chairman” Roberts did, by the way. He sicced his lawyers on both The Escapist, and Liz personally.

Furthermore, when I see yahoos like Brianna “Sarin Gas Attack” Wu jump on your team, by bullshit detector explodes. 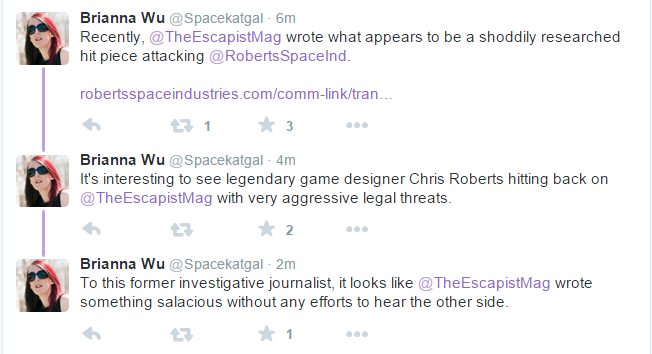 When you resort to calling in lunatics like Wu and using your high-priced attorneys to attempt to squelch press freedoms then it looks like you have something to hide. At least that’s my view. The other tactic they’ve taken to using is smearing the character of longtime developer Derek Smart. He’s intimentely involved with all this, and a lot of the leaks can be traced back to his contacts. I guess he can probably explain it to you a lot better than I can:

In July, after I got wind of the Star Citizen project in trouble, unable to deliver, backer money being wasted, I started to investigate it. I got in touch with Chris to try and get some more details from him. He ignored both of my inquiries on LinkedIn and Facebook. I even wrote a lengthy Facebook post and included shared “friends” in it, hoping that someone would reach out to him. Nothing happened. The Interstellar Citizens blog was live and was propagated and quoted by media.

It was downhill from there.

Then, in what can only be described as sheer madness, they lost their minds and made it personal. They canceled my backer account, and refunded me. Without my requesting it. Then to make matters worse, they sent out a press statement to various outlets about my being refunded, and my account canceled. They tried to make it look like I had somehow violated their ToS for the game and the website, and was using Star Citizen as a platform to promote my Line Of Defense game. Then they doubled down when Ben Lesnick in customer service, made a snarky public forum post about it.

Problem is 1) I have never posted on their forums 2) I had never downloaded the game due it not being complete nor playable. They actually confirmed this in their legal response letter as mentioned in the Star Citizen – The Long Con blog. I currently have access to three accounts through friends and contacts. I used those to test the latest modules, write about them etc.

All these actions were taken in obvious retaliation for the blog and the fact that it got widespread release in the media. As you can now see, they simply made it worse by making themselves subject to the The Streisand Effect. That aside from the fact that they decided that taking on the one person who simply can’t be intimidated or scared, was the best path forward. They bet on my being completely vilified for writing an opinion based and technical blog; while forgetting that I have been a fixture of this industry for almost 30 years and that sort of tenure has its merits.

Once that started, I knew they had something to hide. So I kept digging and writing (six blogs to date). All the while Chris and Sandra kept making defamatory statements about me both in writing and in person. And there are people willing to be deposed under oath about the aforementioned statements.

People have been going at Derek Smart and trying to attack the messenger, just like they have been with Ms. Finnegan. It all feels very familiar to me. Why? Because I experience it myself on a daily basis. I can only speak to my personal experience here on this website and so that’s all I’ve ever tried to do. Everything I write is tinged with my personal opinions. That has been openly expressed to all who have ever read this blog. I am not objective but I do tell you the truth as I know it.

What I can say about Mr. Smart is that I have found him to both both forthright and honest. Just like Liz, he’s treated me with respect and professional courtesy. Where are the courtesies coming from Chris Roberts and the Star Citizen team? Instead they spend their days bullying and obfuscating. That’s not how a responsible outfit is supposed to act. So while I can’t tell you that everything The Escapist reported is true (I don’t have that insight), I can tell you that the actions of Chris Roberts and RSI make me think that they have something to hide. The Escapist isn’t perfect, but I have a lot of respect for that outlet…much more than 95% of the rest of the gaming media.

Aside: Fuck you Jason Schreier, you sniveling little weasel. For you to come out and shit on this style of reporting when you’ve done the same thing is beyond laughable… 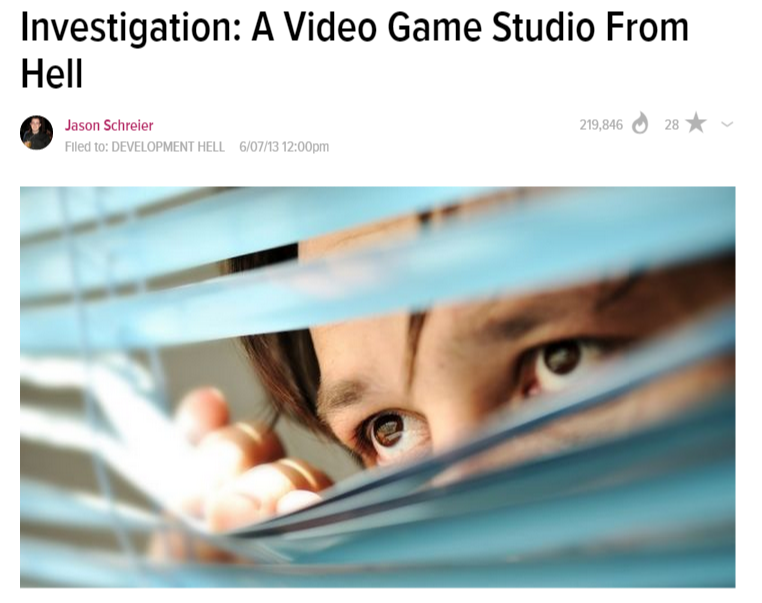 So, I’m going to go with my gut and roll with people who have been trustworthy in my eyes. In this situation, those people would be “Bandit,” Derek Smart, & Liz Finnegan. The rest of you are free to make up your own minds, and I look forward to hearing those thoughts expressed below. We’ll also be talking about this issue tonight on TheRalphRetort LIVE @ 6PM EST. We’ll be joined by the lovely and talented contributor, as well as Matt Conway of our sister-site TheWrestlingRetort.com. I’m going to be writing more there soon, but people will believe it when they see it, so I’m not going to waste time talking about it. Anyway, we’re trying to re-focus the Wednesday shows to be more tech and gaming specific, with of course a huge dose of GamerGate news and opinion. Saturday’s with Janet Bloomfield will be the main cultural show, although we’ll still have small doses of that on Wednesday’s as well. It’s almost impossible to escape these SJW ideologues completely, to be honest with you. Anyway, join us live tonight if you have the time, and catch the replay later even if you don’t.