Ernest W. Adams has talked a lot of trash about GamerGate before. But, that was on Twitter. What we usually can’t see, is the groundwork propaganda that is pumped out on less public networks. Luckily, TheRalphRetort has spies in many places. Our budget is almost non-existent, so I can’t afford to pay for dox like Adrian Chen (lol). Instead, I rely on a friendly network of sources, and unknown anons who volunteer information. Stuff like Facebook posts often come into my possession, but I don’t always share them.

But when you have the founder of the International Game Developer’s Association outright calling us all criminals, we have a problem. Even though Mr. Adams is no longer involved in the operations of IGDA, this is still an influential person.  Despite his prominence, he acts like a petulant child.  Ernest runs us down behind our backs, all the while refusing to come out and discuss the issues at hand. He’s explicitly stated that he wants nothing to do with reasoned debate (a frequent refrain of our opponents).

If you go to Gamasutra today, there’s a bullshit article about E3 booth babes (but also about us, really), and the first comment is from none other than Mr. Young. Let’s see what he has to say:

A company is not a political system in which a plurality of views must be tolerated; it is a business whose function is to make money. If an employee doesn’t support the core values of the company, he or she needs to find another one more suited to them.

Surprise, Surprise! Ernest wants companies to start stamping out dissent from the SJW/Silverstring Agenda. They know that they can’t compete if it’s a fair fight. They’ve always known it. So, now they want to start an inquisition against GamerGate at the major publishing companies. You’ve got to hand it to Ernest, though. At least he’s a true believer. He talks this crazy shit in more private settings, as well. 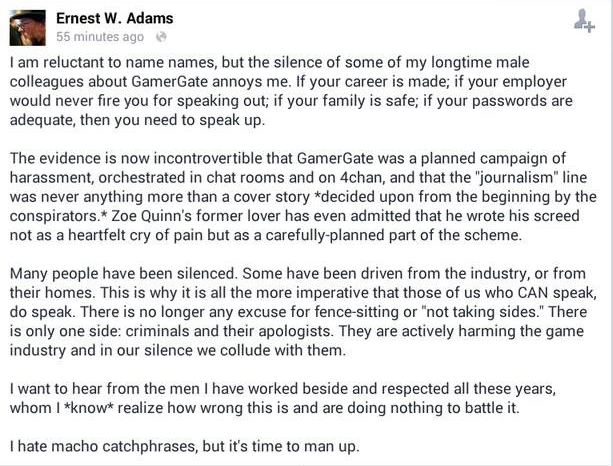 How can these monsters reconcile their charges, with the actual facts on the ground? GamerGate has been harassed MORE that the SJWs, if we’re being honest here. Just because the media never talks about it, doesn’t mean it didn’t happen. I’ve been doxed, along with several high profile supporters. KingofPol has been swatted and received a knife in the mail. Milo Yionoppolous had a dirty liquid (urine, or something like it) syringe sent to his address. What are these people talking about? We’re harassed daily. GamerGate aren’t the ones acting like criminals. These lying devs and journos are the ones knee-deep in felonious-type behavior.

This raving SJW ideologue also refuses to listen to his well-meaning friends. He again rejects any facts that don’t coincide with his warped vision. 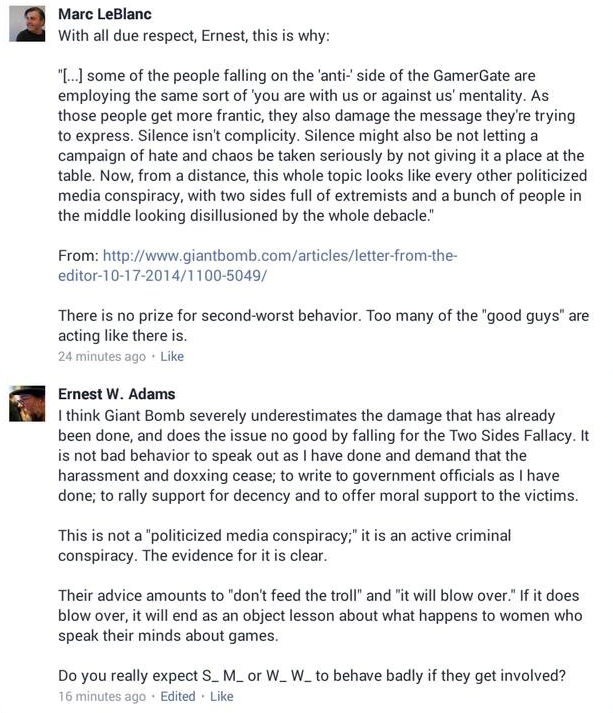 There’s not much use in talking to folks like this. Sitdowns with people like Stephen Totilo are fine to have, but he’s not addressing the real issues. I doubt he ever will. Firing Nathan Grayson would mean he’s been wrong this whole time. Similarly, Ernest W. Adams can’t admit to one sliver of the GamerGate argument, or else his whole radical show goes up in smoke. That’s why he has so much invested in shooting down even the mildest rebukes.

Thankfully, we don’t have to be concerned with the people like Ernest and Totilo. We’re talking to gamers, and to society at large. We’ve grown our size and scope by the hundreds of thousands in just 8 weeks. The fact of the matter is, we’re just getting started. It’s not criminality, you radical feminist nutters.