OK, I woke up “early” today, so let’s get down to it. As it so happens, there was another huge story breaking right when I arose. What is this, October? Anyway, there were some anti-Anita Sarkeesian posters spotted today at E3. The anti’s are losing their shit over all this, for reasons unknown. Public figures who insert themselves into a debate (and try to enforce their values on others) often find themselves the target of negative campaigning. Of course the other side is acting like this is a death threat, or some shit. The posters themselves have GamerGate stamped all over them, leading me to think it’s an obvious troll, possibly conducted by Jonathan McIntosh himself. People sometimes forget, this guy’s main skill is crafting propaganda JUST LIKE THIS. Just read back here on my own site if you don’t believe me.

Wannabe Bansky ass dude McIntosh…this is right up his alley. His career is full of this kind of shit.

Anyway, let’s go ahead and look at the posters, for those who haven’t seen them yet (you can barely see it, but GamerGate is written in grey in the background): 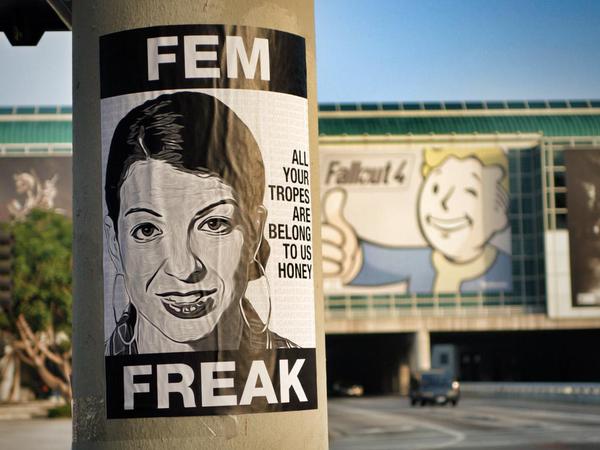 There were some others as well: 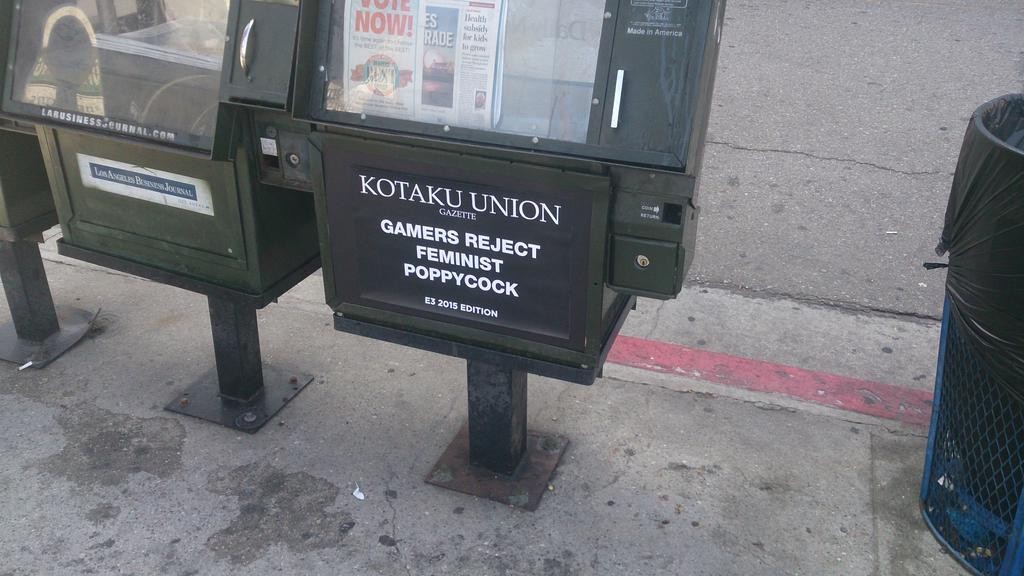 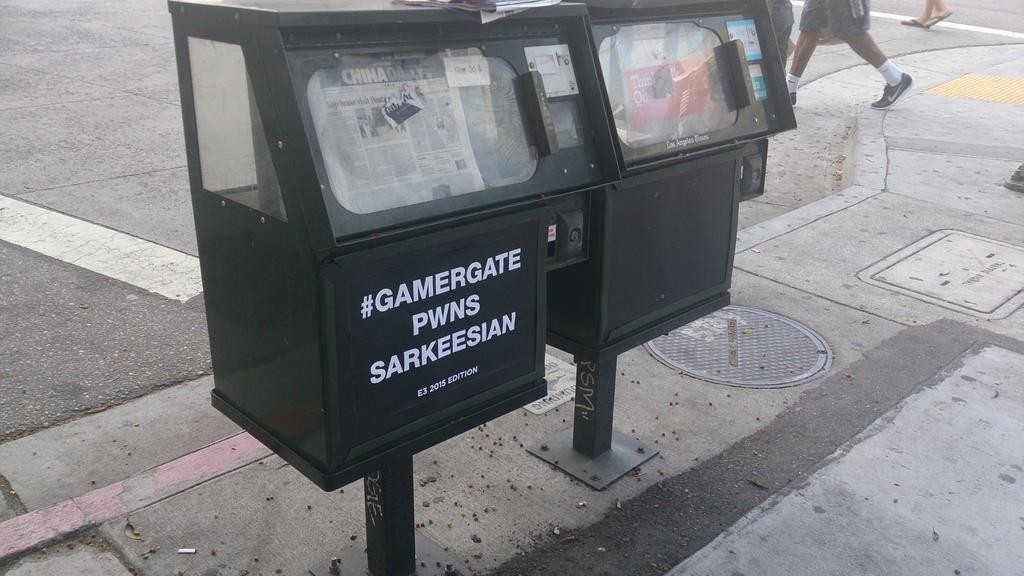 Honestly, the last one was kinda hilarious. But we have to ask, who stands to benefit from an action like this? I don’t think any right-thinking GamerGate supporter would ever leave a poster like this. To me, it looks like McIntosh or one of his flunkies did this. They make hundreds of thousands off Feminist Frequency. It wouldn’t be too hard to pay some homeless guy to put them up, if FullMac didn’t wanna risk getting his hands dirty.

Either way, no matter who put them up, the reaction from the SJWs is ridicuously over-the-top. Here’s IGN editor Mitch Dyer going off. As a result, I’ve decided to take IGN off the page. Disgraces like this are not something I want to support: 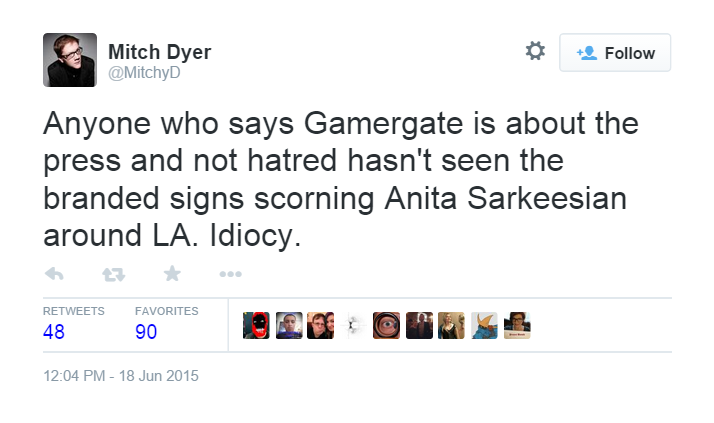 And honestly, fuck the IGN editor. I'm sure they won't care, but I'm taking those fucks off the news listings on my site.

Polygon is wigging out as well:

The “Fem Freak” flyers stand in stark contrast to the typical advertising found around the convention center celebrating the upcoming release of anticipated video games.

The bottom of the flyer states “All Your Tropes Are Belong To Us Honey” and the background repeats the hashtag “GamerGate.”

This year’s E3 has seen a marked improvement in the representation of women in gaming, both in how they are treated in video games and how many have been involved in presenting games on stage, talking about them in interviews and playing them in demos.

GamePoltics chimes in with some good old fashioned hand-wringing:

Some are blaming GamerGate for the flyers (it’s hard to see in the pic but the poster’s background is made up of “GamerGate” hashtags), while people in GamerGate are calling it a “false flag operation” to drive sympathy for Sarkeesian in the gaming community (see this Tumblr). Sarkeesian is a popular target for her Tropes vs. Women in Vide Games series of videos talking about gender in video games and her regular commentary on social media about games, violence, and sexism in games.

You don’t have to agree with what Sarkeesian says or even acknowledge who is responsible for posting these flyers to roundly condemn the message and imagery they contain.

Honestly, I don’t have to condemn a fucking thing…except idiots like Mitch Dyer jumping to unfounded conclusions. Someone told me I was going too far in speculating about McIntosh. Well, I would say to them that turnabout is fair play. What about the usual SJW suspects, what are they saying?

So yeah, no more thoughts, just that this is a really horrible thing and I hope @femfreq, a human like any other , is doing okay.

(she writes for Destructoid, and just put out a piece on this herself) 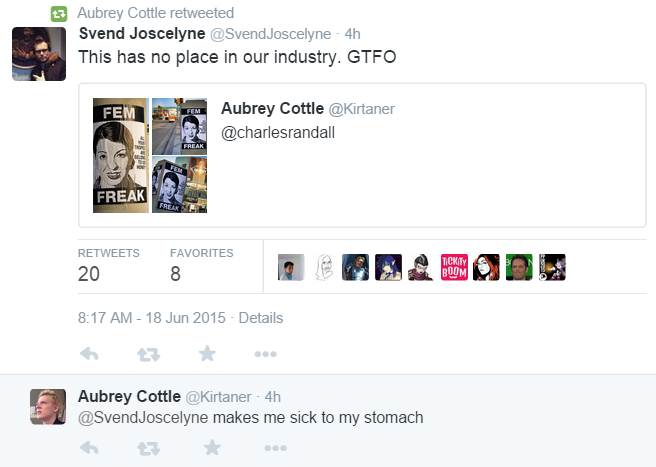 I’m still waiting for people like Wu and Randi to say some dumb shit, but they’re too busy talking about the Charleston shooting and “white privilege.” I’m sure they will get around to this before the day is up. Rest assured, I will be updating this story as more comes in.

UPDATE: More is coming in…

Who made all those Fem Freak posters?

If we work together, I'm sure we can solve the mystery.#GamerGate pic.twitter.com/ApA6J1RXQ3

#GamerGate Turns out the culprit was another group of activists http://t.co/tXnU54TZPT