I’m Loved (And Hated) By Thousands

As you know, I am usually at the center of some kind of drama. It doesn’t really matter what’s going on, it could be big, it could be small, but I’m almost always right there in the middle of it. There are several reasons for this. One, I have always adopted an attitude of no fucks given. In practice, it’s quite rewarding. A clown comes in my Twitter mentions talking shit and I tell them to suck my dick, go fuck themselves, or what have you. It’s fun. But, enemies start stacking up when you take the time to shit on losers. I honestly don’t even remember most of those types of interactions. The people on the other end do remember, though, and when they smell blood, they come after your’s truly. That’s precisely what happened last night.

There’s a punk on Twitter who has a gimmick where he plays puppeteer for a goofy ass otter. It never amused me, even before I started despising the hypocritical piece of excrement. I always thought it was lame and unfunny. Fuck being cute, if I wanted that I would go watch kitten videos, not listen to some suicidal fuckboy throw his voice while he has his hands up a plush toy’s ass. This person also trades on his depression and tries to use it as a shield. Unfortunately, many idiots are taken in by this sort of thing, Cathy Young included. But, I’ll get to that in a minute.

I went into said punk’s stream a couple of nights ago and talked a lot of trash. He then screencapped it and tweeted it out yesterday morning. When I got wind of it later and saw how they were spinning it, and saw how CultOfVivian had retweeted and liked the post, I decided that my truce with her was kill. I don’t think that was an unfair decision at all. Many people have said, “Oh, it’s just a like/RT, why are you getting so upset?” To me, this reasoning is completely idiotic. True, I could have let it slide, but the point is that when you’re supposed to be putting beefs behind you, it’s not kosher to retweet attacks. That’s not peace, that’s aggression. Anyone saying otherwise is either an imbecile or a liar…or both.

Which brings me to Ms. Young. She’s been published on all sorts of platforms. I will never get to that level no matter what I do here. Why? I’m not considered respectable. That’s actually the design of this site, though. I’m not trying to play the establishment games. I hate the fucking establishment. But someone like Cathy Young is trying to play those games. So when I see her liking a tweet like this, I think it’s more than appropriate to call her ass out as well. 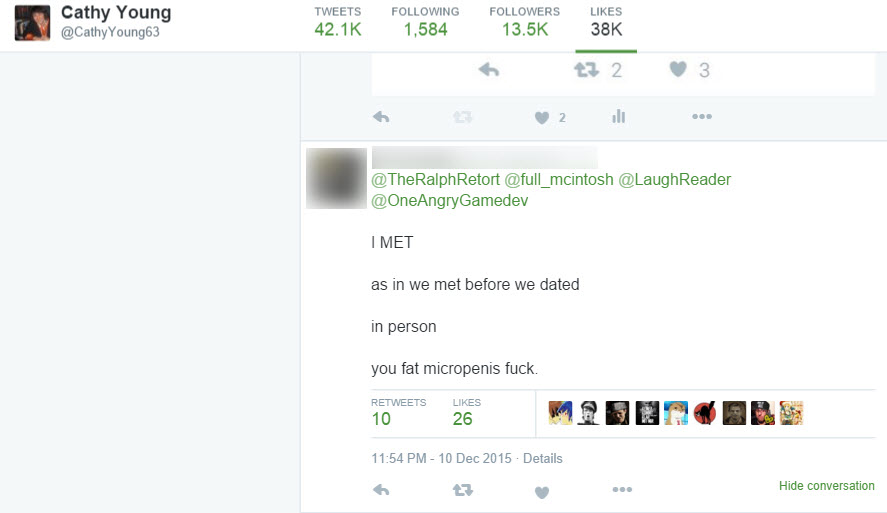 Let me explain something to those who don’t understand the micropenis thing (yes, it’s dumb). The fact of the matter is, I don’t actually have a micropenis, believe it or not. It’s nothing to write home about, don’t get me wrong, but it gets the job done. Where does this libel come from, then? Well, a group of shitposters called the AyyTeam grabbed some random pics of a tiny dick and tweeted it out last spring while simultaneously claiming it was me in the photos. Since a lot of people are completely fucking stupid, they accepted it as fact. Then you also have the crowd who knows it’s not true but continue spreading bullshit anyway. A supposedly respectable journalist, one who was supposed to be cool with me at the time, “liked” this line of attack last night, all because I called out her precious otter fuckwad (and his mascot enabler).

Ralph, why did you go in that chat and fuck with the otter creep in the first place? You know not to reward losers and trolls with that attention.

That is a very fair point. I do know better than to give these hangers-on the attention they crave. However, sometimes I just can’t help it. Since October 1st, this autist has mentioned my name at least 70 times on Twitter (a very conservative counting, by the way), often times with gems like this… 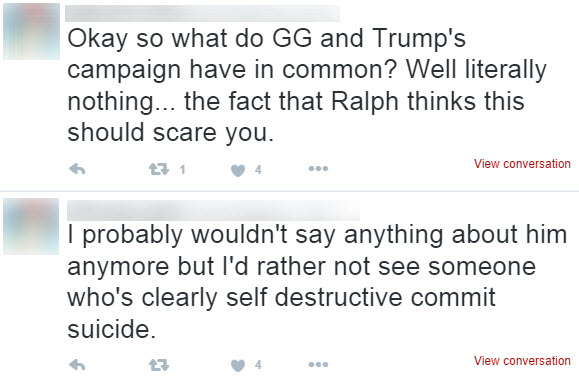 Check the results for yourself. How can someone be this obsessed with me? I don’t even go at SJWs like that because it would be insane to do so. Hell, Twitter would likely kick me off the service for targeted harassment. But what do brain-damaged motherfuckers who suck up to the right people get as a reward for attacking me in this manner? Hugs lol… 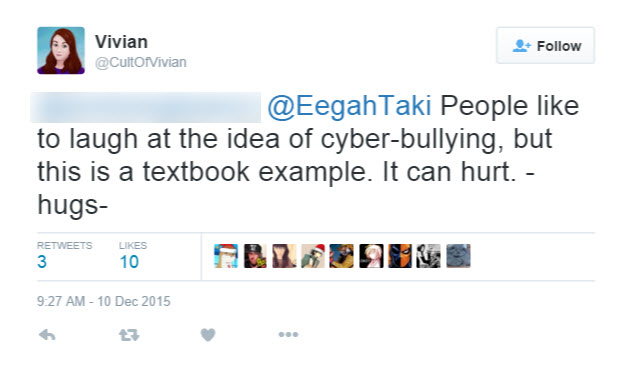 You can’t make this shit up, people. So if lames want an apology from me, they will be waiting for an extremely long time. I won’t apologize for defending myself and calling out hypocritical fucks. Ever. Suckers like Cathy Young can do what they want, but I would rather see myself in the ground than rollover for these frauds. Fuck the site, fuck any sort of influence…I will not live like a bitch.

Otter lame and his team of psychologically damaged losers spread around a quote I made from his shit stream the other day. I said, “I’m loved by thousands.” It does sound like a boastful statement, and I guess it sort of was. Thousands of people come to this site daily, which is where I got the line from. I know for a fact that many people do enjoy my work and care about me and my well-being. But there are lot of people who also hate me, as many of you saw yesterday. That will never end and I’ve accepted it. Regardless, I will never comprise myself and my principles for the GamerGatePlus crowd. I would be wealthier if I had decided to suck that particular dick, truth be told, but oh well. I can’t have it all…but I can have my self-respect.