I’M SURE THIS WILL WORK: Pepe the Frog “Killed” by Creator Matt Furie

If I had somehow created a cartoon as iconic as Pepe the Frog, I would be making money hand over fist. Even though most of the Pepes you see floating around are made by anons, think of the hundreds of thousands of dollars you could likely make through “official” Pepe merchandise. Obviously, you might want to get as wild as some of the anon material, but you could play to it in many different ways without going as far as they do. Maybe you could make jokes about the more risqué stuff, etc.

Well, you could if you weren’t such a sourpuss like Matt Furie, the man who actually did create Pepe. Despite the cartoon being more famous now than at any point in its history, the guy decided to kill him off yesterday.

After fighting an uphill battle to reclaim the feel-good image of his popular character after it was perverted by a culture of hate, cartoonist Matt Furie laid to rest Pepe the Frog in Fantagraphics’ Free Comic Book Day offering, “World’s Greatest Cartoonists.” In a one-page strip, Pepe lies in an open casket while “Boy’s Club” friends Landwolf, Brett and Andy mourn him in their irreverent fashion. 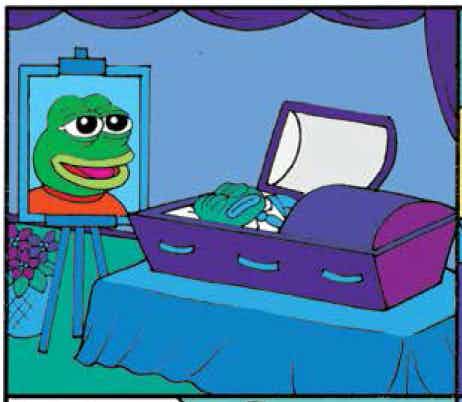 Yes, I’m sure this will put the whole Pepe meme to rest. Good call, Furie…you dumass. Also, why does his art look like such shit when compared to the anon stuff? I don’t know, I guess it’s supposed to be sub-par. If so, mission accomplished.