If you look back at some of my articles, you know that we’ve seen quite an array of questionable and offensive people. From Leigh Alexander’s abhorrent behavior, to Ian Miles Cheong‘s Hitler love, threats of violence, advocacy of doxing, and countless examples of hatred against gamers and our culture. But rarely have I been as taken aback as I have been the last couple days. That’s because of the behavior of prominent gaming cartoonist  Elizabeth Simins. Most radical SJWs at least try to disguise their contempt for men, a little but. But not Ms. Simins:

Start a new gaming industry free of men? What kind of psychopath says such a thing? I have never seen such language come from our side. I definitely haven’t heard anything comparable to this come from anyone with any type of following. So, why isn’t the industry condemning this disgraceful man-hater? 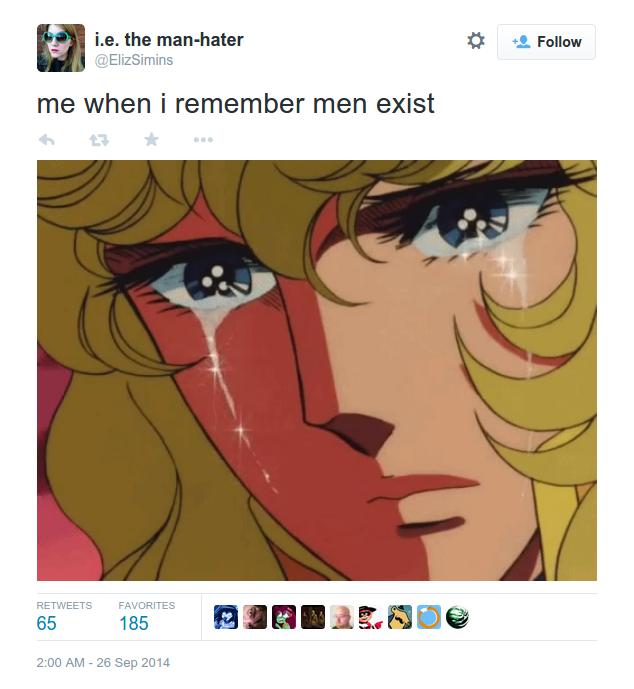 But, get this: not only are they not coming down on her, they’re actually DEFENDING HER! What kind of bizarro fucking planet are we living on? A person like this should never have a place in the gaming industry, in any, shape, form, or fashion. If she recants these hateful statements, perhaps there’s a place for her. We should always be open to future forgiveness, But she’s not retracting. She’s doubling down on hate instead:

If I was as subservient as Tim LaRivière, I'd consider quitting life. This makes me sick. #GamerGate pic.twitter.com/JpU8JCPukA

This is how this foul human being talks to our most well known moderate, TotalBiscuit. It’s one thing to attack a firebrand like myself. But to go after TB like this? The man has cancer, for crying out loud. It sounds like she wouldn’t be too sad to see him leave this earth altogether. You have to be sadistic as hell to think like this. And instead of being run out of town on a rail, she’s celebrated as a hero. Our opponents are revealed as more and more disgusting by the day.

Speaking of days, at the end of this one, it’s all about getting some cash. The shameless paper chase is all these people know. Having any core convictions, or values, means nothing. They refuse to call out the worst among them, even when they’re top figures. I, on the other hand, am called out by moderate forces in GamerGate daily. The double-standard is immense, and it will only get bigger. The higher the stakes, the more likely these people are to sell their souls. It’s a personal character flaw.

Stephen Totilo of Kotaku has refused to comment on his site’s past relationship with Simins. She worked there this past summer, and was called their “resident cartoonist.” She’s been making offensive statements for awhile now, so it’s hard to believe that she developed these attitudes after leaving Kotaku. Why would a person who hates men, and show that hatred openly, be hired anywhere? Now she works at the feminist outfit The Mary Sue. This kind of hate passes without sanction there as well, so I can’t say I’m surprised. Even still, you think they would be ashamed to have this person on the payroll.

The problem is, they aren’t. To combat their extremism, I try to shame these companies into changing by shining a light on activities that normal people find repugnant. Censorship is not popular. Radical feminism is not popular. Their shit art games are not popular. The only place they win, is with the radical elite.

We win when we take it to the people. Tell your friends about these sites. Show them the hate that Elizabeth Simins, Leigh, and the rest of the gang have produced. Include them in your sponsor emails. They’re fighting us so hard because we’re winning. Don’t let up now. Double down on GamerGate instead.