OK, you guys remember the story we did the other day, right? In case you don’t, here’s the short recap: This SJW nutjob, Kim Crawley, wrote a completely inaccurate piece for the Infosec Institute. Brooke, a former contributor to this site, spotted the error riddled article and notified the editor. He seemed relieved that she had caught it, and yanked the garbage fire down.

Ever since then, she’s been trying to say GamerGate “harassers” got her weak shit pulled, when that’s a complete lie. Her incompetence got her weak shit pulled. She said /baphomet/ was deleted from 8chan, for fuck’s sake. They have a thread going on me as we speak haha. She couldn’t even be bothered to check? Oh, yea, that’s right. She’s an expert on chans, but never actually visits them.

It came out today that her editor is fed up altogether with her piss-poor work, and has decided to cut her loose. The letter itself is great. Well, it’s great for me. It probably sucks if your name is Kim Crawley:

Regardless of any possible merit in the Gamergate article, it has caused more than a little grief for me and for InfoSec. At best, it was a bad fit for us. At worst – which I am now in my third day of being called on the carpet for – it has tarred our name and damaged the brand. Whether or not the haters coming after you and us have any legitimacy is irrelevant. This is exactly the kind of bad press that can cost us business. In the end, that’s the sole criteria that counts for anything around here.

This isn’t the first time I’ve been taken to task for content appearing under your byline but it is the last. They wanted to can you outright and pull all your articles. For the time being, they are being kept up, but that can change at any moment.

To the extent that you can call off anyone out there making noise on your behalf, please do so.

Wow, a business that actually thinks about how shoddy practices will affect it’s image in the eyes of the public. We haven’t seen that too often recently. So, how does Kim take this? Does she own up to her horrible article and take her firing with dignity? No, of course not. She tries to blame it on us, and even goes so far as to enlist GamerGhazi shills in her pathetic quest: 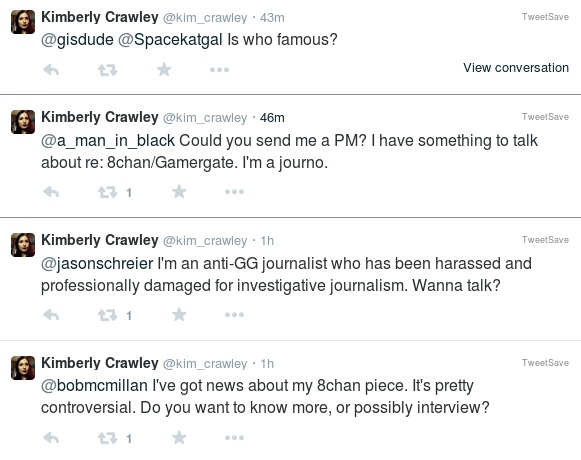 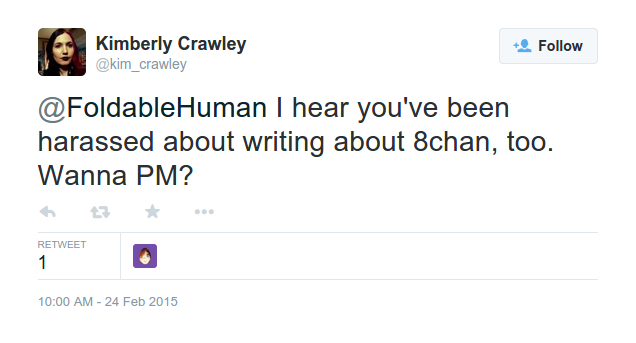 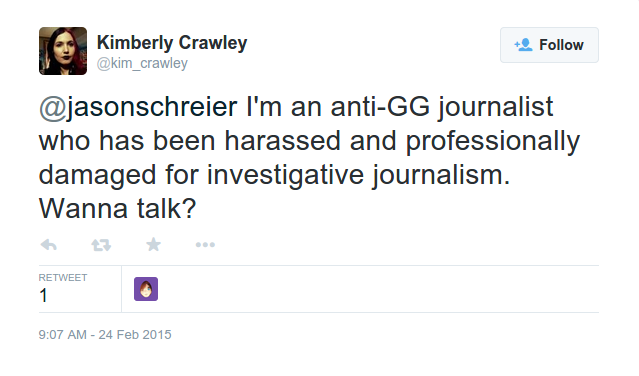 She also tried to drag in Jason Schreier at one point. Hopefully he’s not that stupid, but you never know with Kotaku. This whole thing is fucking absurd. Without a doubt, this is one of the weakest cons the other side has ever tried to pull on us. I have no idea how we were responsible for all her shoddy articles (remember, the editor said this was a recurring theme), but she has the Ghazi Kool Aid guzzlers Listening and Believing. All I can say is, kudos to that editor for taking out the disingenuous trash. GamerGate thanks you.

UPDATE: Special thanks to  @sleepaxs  as well. I wanted to make sure I gave him a shoutout for all his hard work .