Fuck, that was a long lunch I had today, huh? I will say, the shit was delicious. Genghis Grill doesn’t pay me, but I still gotta shill for them. Soooo damn tasty! Also, if they would like to start paying me, they can send gift card coupons to [email protected]. Shoutout to everyone who I was arguing with in the hours after lunch. Twitter sucked me in once again. If the SJWs had ever succeeded in getting my account banned, I’m sure my output here would go up twofold. I’m not sure whether that’s good, or bad. You can be the judge.

Today, I’m going to dig into some chat logs someone sent me around Christmas. It came with some other documents that I’ll be sharing with you later, concerning Zoe Quinn and her gag order on Eron Gjoni. But first, let’s hear from the loons in the GamerGhazi IRC.

Right off top, I can go ahead and let you know that Little Hitler, Ian Miles Cheong, is pretty much the star of the proceedings. In the 70% worth of chat I went over (it’s 5 days worth, give me a break), he was the main person talking trash. I guess that doesn’t come as much of a surprise.

Pinsof wasn’t the only one he went after. He also trashed your intrepid editor over some of my work (along with author John Szczepaniak):

The thing is, we did have the research. We published it in the followup piece. That wasn’t fast enough for Hothead Hitler. He had to take to the Twitterverse immediately and side with his SJW cohorts. 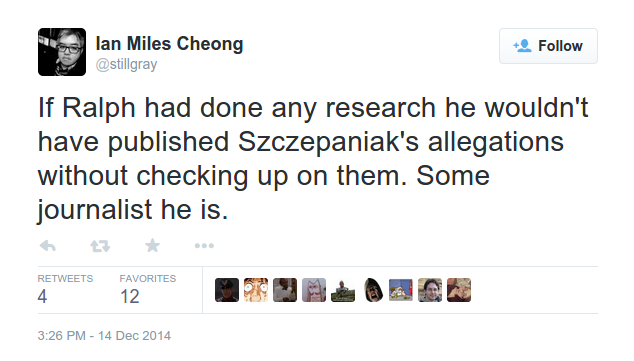 This is the same guy who said he worshiped Adolf Hitler, so I guess I shouldn’t expect rational thought. But this is low, even for Mein Mini Führer. Still, he wasn’t done yet. You know he had to go one level deeper. Projection, thy name is Ian Miles Cheong (he’s talking about Hatred, by the way):

Back to the Reich. Little Hitler also holds a huge grudge against The Fine Young Capitalists:

When Cheong wasn’t talking his shit, the others were busy planning false police reports against their enemies, and talking about the purchasing of dox:

They really want Milo’s book, but are conflicted over paying for it:

But they also hate him:

What about Mike Cernovich?

What do they think about the video game industry?

What about members of GamerGate?

What do they think about Zoe Quinn?

Homeless? LOL, I don’t think so. The second part actually makes a lot of sense, though. Kudos, Malky. What about Zoe Quinn herself? Did she say anything of note?

OK, Zoe just dropped another classic “game.” What about nice things? Surely they said something positive?

No. Not that. Something else…

But at least they keep the important things in mind:

And at the end of the day, even they know what the deal is: