Well, they can’t all be victories. I have some sad news to bring you tonight, as it seems like Intel has reinstated their advertisements with the corrupt and disgraceful Gamasutra. There’s no way to sugarcoat it: this is terrible news (if true). This is further evidence that we need to redouble our efforts, and get even more dedicated than we were before. 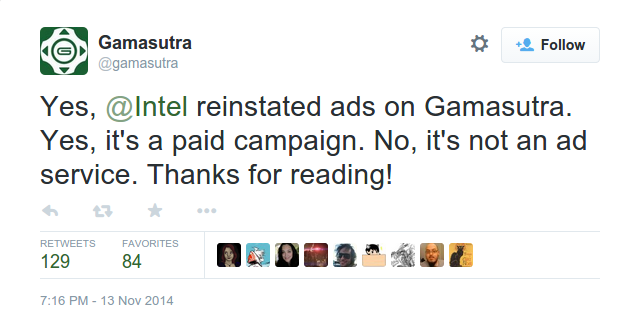 Yes, I’m saddened, if this turns out to be the case. Hell no that’s not going to stop me, and it’s not going to stop GamerGate. Keep doing what you’re doing, and these bastards will fall. We’ve already killed Gamasutra’s credibility in the eyes of the mainstream gamer. Yes, they’ve picked Intel back up, but they’re still shot the fuck up with holes. So, don’t get too discouraged. There was always going to be losses like this. Let’s just work towards replacing Intel with another big name. And don’t give up on them, either. Now is the time to show them your displeasure, in a cool and collected way.

UPDATE: Some people are saying Gamasutra is lying, and that this is a third party ad service. That is how it shows up (and was what I assumed all day), but Gamasutra’s statement led me to believe that they have direct sponsorship with Intel once again. Intel needs to clarify this immediately. I also added the unverified tag, since we haven’t heard from Intel.

Honestly, they would be foolish to straight up lie about it. But we'll see. INTEL NEEDS TO CLARIFY IMMEDIATELY! #GamerGate

UPDATE 2: This poster suggests that Gamasutra is playing a game of semantics in order to stir the pot…

UPDATE 3: It would be a big turnaround for Intel if true..

Regardless if true or not, don't get angry with the sponsors like the dumbass SJWs do. That solves nothing. #GamerGate