Internal Email Shows Guardian Had Mind Made Up on GamerGate

Today, The Guardian put out a piece of trash journalism, calling for the rest of the media to stop giving positive coverage to our consumer revolt. You see, when the SJWs start getting their asses kicked, like GamerGate has been doing, their go-to response is to change the rules of the game. So, they put out editorials designed to shame the few non-biased colleagues they have into not covering us objectively. I can guarantee you that Ricky Camilleri, of HuffPost Live, has gotten a lot of shit for even doing the segment on us yesterday. That’s how they control the narrative.

Earlier this evening, I was provided with an internal email from the technology editor of The Guardian, Jemima Kiss. She thought she was sending it to her staff, but instead unknowingly sent it to an associate of TheRalphRetort.com. After reading it, you can see that we never had a chance with her, or The Guardian. They’ve had their minds made up for quite sometime (at least as far back as Sept. 23rd).

If I had to guess, I would imagine there are many more emails like that, stretching back even further. She shows a clear disdain for our consumer campaign. I don’t think such a woman could ever be impartial. Outright dismissing our claims as “idiotic?” That’s not how a professional journalist is supposed to behave. 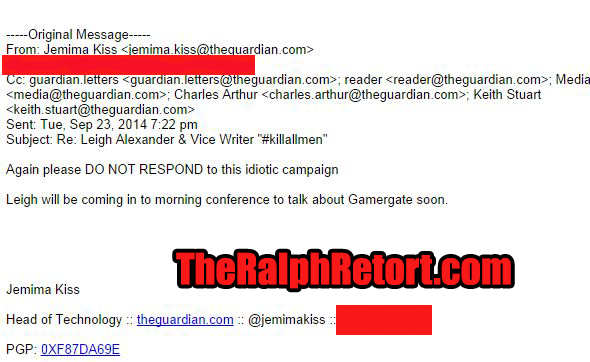 “Do not respond?” I guess she was afraid her journos might learn some unbiased facts from our supporters. So, not only does she call our campaign idiotic, she also tells her reporters not to even talk to us. How is that the way to get to the truth? But, you have to remember. People like Jemima Kiss aren’t interested in the truth. They only want their side of the story to be told, fairness and journalistic integrity be damned. I would be more upset, but these past few weeks have made me almost immune to this sort of thing.

So, when you see the this, or the next, hit from The Guardian, keep in mind where it came from. They’re not interested in letting us have our say, because they know we will win the day. It’s the same thing we’ve seen for years in the gaming media, just bigger. These old media outlets are already going under, though. Just read about it. One of the main reasons why, is breaches of trust like this one.

The Guardian should be ashamed of not giving GamerGate a fair shake,