Last Saturday, I streamed Troll Hunters with a couple of associates. We broadcast it live on my Streamup channel, since they don’t seem to care about pesky things like copyright, etc. YouTube does care about that, though, so the upload I put up there this morning only has the 22-minute post show. The whole thing was basically like watching a poorly written comedy pilot, even though the on-screen talent were all trying to be super serious. Well, except for the troll they confronted at the very end. He seemed to be getting a kick out of the whole thing. I don’t blame him. The program (not to mention the idea in general) was top kek, as they say. 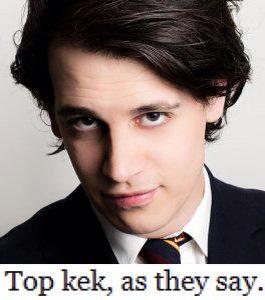 Like I said, the whole thing was absurdly hilarious, but it got even funnier when I saw a story out of Scotland this morning. It turns out having a certain troll named Stewart McInroy appear in the middle of the program might have been a mistake. He happened to be the only one who was even close to remorseful, although they only talked to two trolls altogether (OK, 3 if you count Milo Yiannopoulos). Here’s what one of his victims had to say to The Courier:

Mr Bryant said: “Thank you so much, BBC, for trolling my family without letting us know this man was going to appear on TV. “BBC – you are just as guilty as this man for not letting us know he was going to be on TV. You actually trolled my family – I’m fuming. It is a joke – you have hurt my family and I am raging. “This guy told me he killed my son – what are you doing? What the hell was that about?”

The BBC did eventually apologize, but I just thought this made the whole show even nuttier. Maybe it was a bad idea to begin with, guys? Alright, I won’t say that. At least it gave me a chance to have a few laughs on a Saturday afternoon.

If you’re interested in having a few of those yourself, check out the #AfterShot I did with Nora and Goose.