Sometimes, a person goes into a rage over something minuscule, and they let their true feelings slip. The small issue they blew up over might only be tangentially related to the larger revealed truth. I can sit back and remember this happening to myself a few times over the years. It’s rarely some positive truth that’s revealed, at least in my case. Jim Sterling and I seem to have that in common.

A few years back, Sterling worked as the reviews editor for Destructoid. He was as irritating and lame then as he is now, but at least he was more honest with his audience, in terms of showing his true character. I don’t think I’m the only one who respects a genuine person more than a fake, even if the fake persona is more outwardly pleasing. But, Jim has made his SJW bed. I guess I’ll let him lie in it.

In any case, people can be as fake as they want to be. That’s fine. The mask is hard to keep up 24/7, is all. Sometimes the persistent and pesky truth gets in the way. That’s what happened to Mr. Sterling. After arguing about a very trival issue, namely, taking screenshots of collector’s editions with tomato sauce on them (?), Sterling let his true feelings on ethics in gaming journalism slip:

“Take your “journalistic ethics” and shove them up your arse. The cool kids are trying to have fun while you flood the Internet with your impotent rage.”

Honestly, I might have held this story, if not for the second line. You could say he was making fun of the people who were up in arms over something so silly. But, the “cool kids” part reveals his true mentality, and also makes me think the part about ethics was meant in general as well. The man seems irritated. He’s fed up with challenges from people who he feels are below him. We see this sort of thing a lot from the game journo crowd, so it’s not too surprising. It is pretty rare to see them state their mentality so clearly, however. 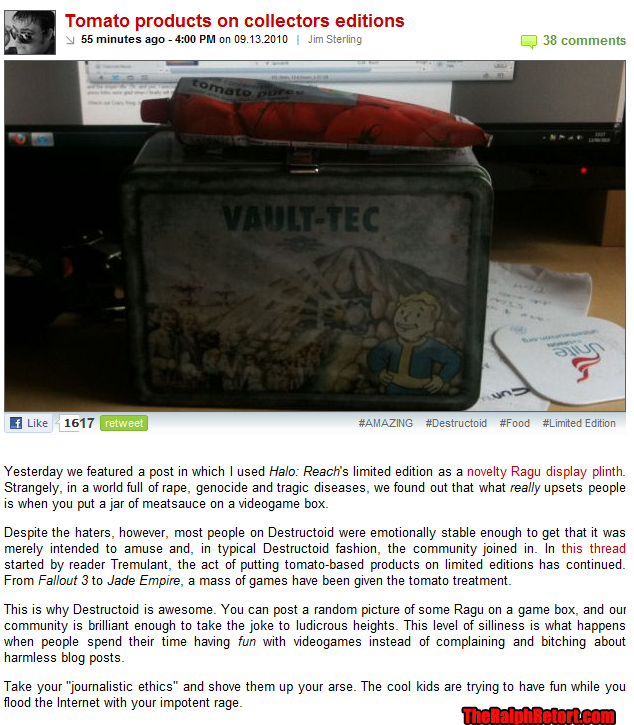 I realize some people are going to try to make excuses for the quote. They’re gonna say it’s old. They’re right, it’s not new. Let’s think of how this would be portrayed if it came from one of us, though. I don’t believe we’d be getting the benefit of the doubt. And rightfully so. There’s no way to explain this comments, except by renouncing them, and declaring yourself a changed man.

Perhaps that’s what Jim Sterling will do. But, If I had to guess, he’s just going to try to laugh off this report. Maybe not, though. He didn’t do a very good job of laughing off our last post about him. In fact, he threatened retirement. Fair enough. I guess putting up with all this impotent nerd-rage can wear a cool kid out. Today, maybe he will instead explain his comments, rather than acting like a huge crybaby.

That’s a big maybe. Needlessly to say, I wouldn’t bet the farm on it.

PRE-STORY UPDATE: This is a first. Here’s an update to my story before I’ve even published it…

Before I publish, I want to point out that Mr. Sterling is still making fun of ethics this very moment..#GamerGate pic.twitter.com/lDs9q0DaRy

UPDATE 2: This thread on Reddit gives more context to this story.