Jimmy Wales Picks The Wrong Side

As I’m sure you’ve heard by now, Jimmy Wales came out and shit all over GamerGate recently. In fact, he’s done it multiple times, over the last few days. After we reacted negatively to the insanely biased GamerGate Wikipedia entry, he decided to fire on us. To me, it seems like Wales has forgotten history. The media has repeatedly maligned us unfairly. If anyone could understand, you’d think it would be Jimmy. But no, he’s bought the SJW party line, and doesn’t show too many signs of deviating from it.

First, let me show you some of Mr. Wales’ comments about GamerGate. Here’s the tweet from the other day, that had originally prompted this column: 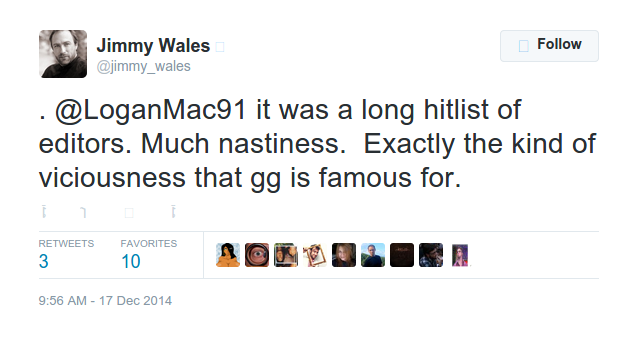 That was bad enough, but he didn’t stop there. He then fired of an extremely long email, that takes shot after shot at us, while pretty much exonerating the SJW, and their cohorts in the agenda media. I’m not going to reprint the whole thing, because I don’t feel like transcribing that many lies. But here’s a screenshot of what he wrote: 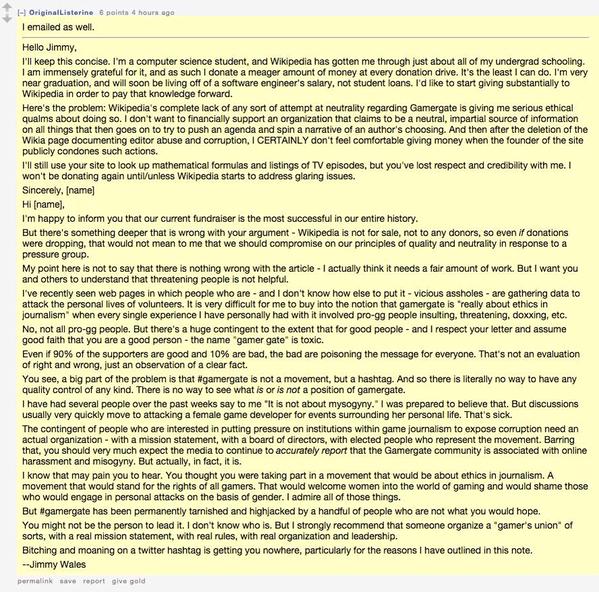 He talks a lot about GamerGate being tarnished, despite the fact that no harassment or death threats have ever been tied to us. He appears to have Listened and Believed 100%. I’m not naive enough to think that we’ve never made any mistakes. Only egomaniacs claim a completely clean record. But on balance, we’ve been head and shoulders above the mainstream media and gaming press. It’s not even close, in my opinion.

Jimmy Wales should know what it’s like to be misrepresented in the media. At least, I’m assuming he thinks these are mischaracterizations. For instance, did you know that he was accused of using his influence to edit Wikipedia biographies, and that the allegations originally ran on Gawker’s Valleywag? How can Jimbo side with the clowns that tried to ruin him? I can’t find the original Valleywag link, but here’s a recap of the story:

“So, what’s the big deal when a relationship goes sour? Well, the two met when Marsden contacted Wales to help her “clean up” what she perceived to be errors on her personal Wikipedia page, and there have been allegations that Wales used his influence improperly to make changes.

Former associates of Wales’ are using this scandal to bring up other worries they have about the organization at the foundation. Former Wikimedia exec Danny Wool, who left the foundation last year, wrote a blog post insinuating that Walesused the nonprofit foundation as his own personal piggy bank. Expenses that Wales tried to apply to the foundation included $300+ bottles of wine and visits to Moscow massage parlors, Wool alleges. According to Wool, the expenses got so out of hand that the Wikimedia Foundation took away Wales’ corporate credit card.

“There were occasions where he used [the Wikimedia Foundation] for personal advancement under the guide of the mission. And, as someone who was in there for the mission part of it, I found that rather distressful,” Wool told Epicenter.”

Here’s a Gawker article about Wales’ “other women.” It doesn’t stop there, ladies and gentlemen. They have another piece that basically portrays poor Jimmy as nothing more than a figurehead beggar who has to bow down to the SJWs he let take control of his operation. The woman they’re talking about, Sue Gardner, left in May 2014. But one has to assume that she hand a large hand in picking her successor:

She has a cushy job: The former Canadian journalist has $6 million to spend, with no functional supervision. And Gardner managed to get herself on the board’s nominating committee, so she gets to pick her own bosses — a conflict of interest so ridiculous it beggars the imagination.

Wikipedia is now running ads thanking Wales for his help with Wikipedia’s fundraising. Wales has held onto his special “community founder” board seat all his own, now that the board has gotten around to reappointing him — but the move required Gardner’s consent.

These guys pretty much tried to destroy Jimmy Wales with the same SJW playbook they used on GamerGate. Why is this fool taking their side now? Maybe he’s forgotten. He also has financial interests at stake. That could also be playing a role. But I don’t see how he could side with a media like this. It’s not just Gawker, either. Here’s the Associated Press making him look foolish when talking about the dispute over the founding of Wikipedia:

“Wales has repeatedly tried to address this — even going so far as editing his own Wikipedia biography to tone down credit for Sanger. Such autobiographical contributions are frowned upon in Wikipedia’s community, and Wales apologized after his changes were noticed and publicized by blogger Rogers Cadenhead in 2005.

In a lengthy instant-message exchange about Citizendium and other topics, Wales raised the subject of Sanger’s role: “When you write this up please do not uncritically repeat Sanger’s absurd claim to be the co-founder of Wikipedia.”

“I know of no one who was there at the company at the beginning who would think it anything other than laughable,” he added.

Yet a few moments later, Wales asserted that he didn’t really care: “I am not bent out of shape about it,” he wrote. “The facts are on my side, which is why I bother so little about it.”

Instead of siding with the biggest threat these media clowns have faced in years, he take their side. SJWs appear to have relegated him to punk status in his own company. Maybe that’s why he doesn’t dare speak out in our favor. But he could have at least refrained from throwing us under the bus. His comments in that email are being paraded around as a huge victory for the other side. It even seems like he’s raising money off of it. The whole thing is just a sad episode. He appears to be another moot. He showed signs today of being willing to listen, so one can only hope. But I wouldn’t put too much faith in him coming around at this point. The stench of Kool-Aid is pretty strong. I would love to be wrong, though.

UPDATE: I had some interesting Twitter exchanges with Wales earlier. Here are some highlights:

.@jimmy_wales All of #GamerGate, pretty much.

.@jimmy_wales @TheHoldenReport Randi and the SJWs are passing your email around like the propaganda piece it is. You're raising $ off GG

.@jimmy_wales The entry on GamerGate call us a movement at least 6 times. Why don't you change it then? https://t.co/U3t56bHJgU