Gawker may be a shithole, but they did bring some interesting things to light about Jimmy Wales, which we discussed in the last column. The Wikipedia post on GamerGate hasn’t improved in the slightest, so I think it’s safe to say that ole Jimmy doesn’t give a shit about correcting the record. He also has a nasty habit of misrepresenting his words on Twitter, i.e. lying. He says one thing to one person, but when called to account, his previous statement’s meaning suddenly changes. This is the mark of a conman.

Now, I’ve be a patron of Wikipedia for years. Up until recently, I had a great affinity for it.  Thus, I hate to call Jimbo Wales a fully-fledged conman, but his troubling tendencies cannot pass without comment. As we’ve seen, he has one set of rules for him, and one set for everyone else. He was caught editing his own bio on Wikipedia, and he’s tried to erase the other co-founder of Wikipedia from history. Now, he’s attacking GamerGate because it’s the cool thing to do in his elitist circles. These aren’t the actions of a person with a powerful moral compass. I agree with him on several things concerning the Internet’s future, but his flaws are too glaring to ignore.

In recent weeks, he’s been dogged by new ethical concerns, namely, the acceptance of $500,000 from the totalitarian rulers of the UAE. Here’s an excerpt about that, and his ties to the unsavory Kazakhstan dictator:

“Your acceptance of the $500,000 in Dubai is the subject of discussion among Emiratis who are not in agreement with the current state of affairs in the UAE as it relates to human rights and freedom of speech,” Wikipedia contributor M.al-A.UAE told Wales on his Talk Page.

The user pointed out deportations of academics and journalists who had documented civil rights in the state. He continues:

There is no freedom in the UAE Mr. Wales … When you donate the $500,000 please do so openly by putting out press releases on these donations. There is no stronger message that you can send to the regime in my country, and others in Arab world, than publicly declaring that you stand with the people who do not enjoy basic human rights. This will send a strong message to governments that they can’t place a price on human rights and for the silence of the West.

After several days of back and forth, Wales declared that he would be diverting the money to a new foundation – and that he’d planned to do so all along. Wales responded angrily to parallels between his UAE jackpot, and his work with the Kazakh government, details of which emerged two years ago.

Using its sovereign wealth fund, the Kazahkstan state funded an agency called “WikiBlim” to edit Kazahk-related pages. Wales created an award (“Wikipedian of the Year”) for the former state official in charge of WikiBlim, Rauan Kenzhekhanuly, and the WMF donated to WikiBlim.

In 2012 Wales married Tony Blair’s diary secretary, and Blair has a contract reportedly worth $13m with the Kazakh dictator. Wales has since shut down criticism of, and questions about, his association with the former UK PM, on his Talk Page.”

Yea, those aren’t exactly the guys you want to be going into business with if you’re concerned about ethics. Take a look at the record of the UAE, courtesy of Human Rights Watch:

The United Arab Emirates (UAE) has continued to crack down on freedom of expression and association. The authorities arbitrarily detained scores of individuals they suspected of links to domestic and international Islamist groups. Court convicted dissidents after unfair trials. The UAE made no reforms to a system that facilitates the forced labor of migrant workers. Plans to ameliorate conditions for female domestic workers fell short of the standards outlined in the convention on domestic workers that the International Labor Organization (ILO) adopted in 2012.

And don’t get me wrong, it’s not like Kazakhstan is any better. They have a thug dictator in charge for life, and he doesn’t mind buying off scum like Tony Blair. Of course, Blair has always been willing to whore himself out to the highest bidder (see Murdoch, Rupert), so this shouldn’t come as much of a surprise. Keep in mind, these are the people Jimmy Wales calls partners (click pic for full story by The Daily Mail). 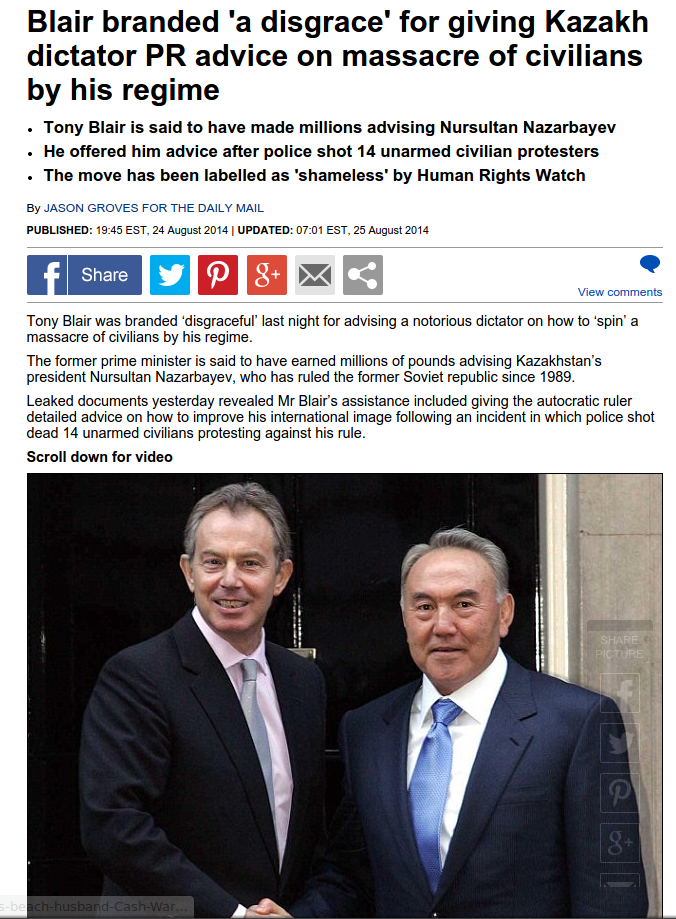 So, he tries to erase his partner from history, rolls around with war criminals, takes money from corrupt petro regimes, and goes into business with dictators. Oh, and he misrepresents GamerGate. When you really look at the Jimmy Wales record, we don’t even crack the top five. He’s got ethical lapses going 15 years back, and continues to have more to this day. Yes, GamerGate is about ethics. I guess now you can see why Jimbo hates us so much.