Kesha Defenders Say: “It’s unfair that the courts decide whether or not someone has been raped”

I haven’t been following the Kesha case that much. I vaguely remember her accusing Dr. Luke (a famous music prouder) of raping her when she was 18 a couple years ago. There’s a couple problems with this, though. For one, she waited 9 years or so to report it. The other concern is that she doesn’t really have any proof when it comes to being raped. Give all the false accusations we’ve seen recently, you can’t just take her word for it. Even if we hadn’t had all those high-profile frauds, you still need evidence when you accuse someone of rape.

Before we get into the people who disagree, take a look at some details from this case. Oh yea, I left out the fact that Kesha is also trying to get out of her 6 album contract with Sony over all this. If she was actually raped, I can’t say that I blame her for wanting to leave the label. BUT, there’s no real proof of that. Also, Sony can’t let people just walk away from their contracts or else others will try the same thing. At least I would imagine that’s their main concern.

From The New York Daily News…

Kesha broke down in tears in Manhattan Supreme Court Friday when a judge denied her request for a preliminary injunction that would have temporarily nullified her contract with Sony Records – and freed her from working with the man she says raped her.

She claims he holds her exclusive contract, and even though Sony has offered to let her work with another producer, Kesha said she feared the company wouldn’t promote her music if she’s paired with a different partner.

The 28-year-old, whose real name is Kesha Rose Sebert, claims that Dr. Luke drugged her with a “sober pill” and raped her shortly after her 18th birthday in California. He was never criminally charged.

There’s some rumors being put out by her team that physical evidence exists. If so, show it to the authorities and let Dr. Luke get charged. That’s about the only way you can save this now, Kesha. Keep in mind, I’m not even saying that she’s lying. How am I to know? I can tell you that she waited 9 years to report the alleged rape and she’s also trying to get out of her contract as a result of the allegations she’s making. She could be telling the truth, but there’s some things that make people think it’s fishy.

While I’m trying to be level-headed about the whole thing, radical feminists on Twitter say we should abolish due process when it comes to rape. No, seriously…

it's so unfair that the court decides whether or not someone has been raped. so much injustice in this world. #freekesha

There are people all over the world who love you @KeshaRose. And I can say truly I am in awe of your bravery. 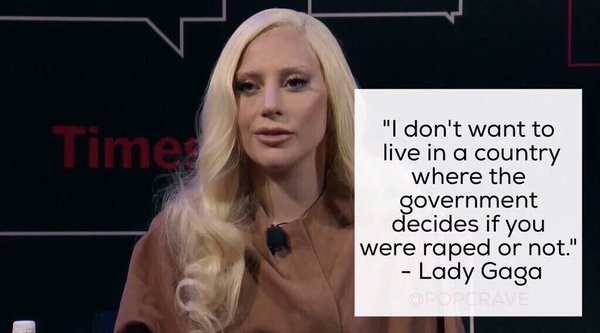 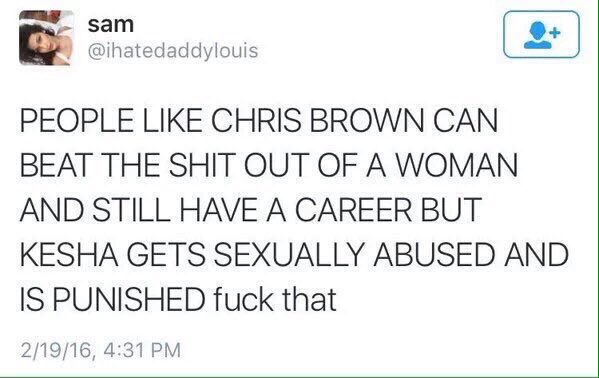 Chris Brown paid his debt to society, so there’s nothing wrong with him earning a living in his chosen profession. If people still want to buy his music then he has a job. It’s capitalism at work. I don’t know how to even describe the ignorance of the quotes before that one. You don’t like living in a country where people are innocent until proven guilty, Gaga? Then get the fuck out. It’s really that simple. The day the court start listening and believing as a policy is the day our republic is done.

As I said, if Kesha was raped then Dr. Luke needs to go to jail. If she has evidence, she needs to turn it over to the police. But the court of public opinion should never be the deciding factor in a courtroom, and it definitely shouldn’t take the place of legal proceedings altogether. Anyone who spews that nonsense is a dangerous nutcase.