This is a column I did not want to write. Even earlier tonight, I was still defending KingofPol. But, after reading Frederick Brennan’s (owner of 8chan) post on the Denton leak earlier this evening, I felt had to address it. The authenticity of the Facebook posts in question cannot be determined. It may still be true. But, KoP lied about getting the information from Stephen Totilo. That idea sounds fucking ridiculous on the face of it, but Hotwheels originally thought that Milo Yiannopoulos was going to run a companion piece confirming the information. I can understand being taken in by that. However, the Milo/Breitbart article was also a ruse.

KingofPol has sworn to me that the info itself is still legitimate. I have no way of knowing whether that is true or not. It very well could be, as I said. I won’t be retracting the stories, but you must now take them with some grains of salt. The Facebook account being deleted does perhaps give it a little credence. As Brennan himself said on his own stream, it may be real. But we know for a fact that he did not get those screenshots from Stephen Totilo. The article proved it, and he also told me the same thing.

KingofPol has never lied to me directly. He has had me on his show several times. He was kind enough to help me get on Internet Aristocrat‘s show. He’s promoted some of my work, way before I had even talked to him. The guy has always been extremely nice and helpful to me. Writing a negative column like this is not fun, but I felt I had to. The man has done so much for me personally, but his failings caught to him in the end. It can happen to anyone. He got taken in by the hype. The rush was too much to ignore. The drive to bust Gawker and Denton drove him to do things he otherwise might not have.

That’s not to excuse what KingofPol has done. There is no excuse, at least not a good one. I publish stories here sometimes that are not fully confirmed. There is nothing wrong with that whatsoever. But, if you go that route, it needs to be labeled as such. I may have went overboard with the labeling of these Denton stories myself, to be fair. But, I always sourced this information back to KoP. He told us it was 100%, and lied to Mr. Brennan in order to make people believe it even more. This isn’t something I’m happy with. He’s since apologized for his actions, but I can of course understand some bad feelings still existing.

Those feelings may not matter though, because KingofPol has put out word that he’s going to leave GamerGate, and delete his Twitter account. This is consistent with some of the statements he has made to me. I advised him to take a sabbatical and come back refreshed. He feels as if his brand is irrecoverably tarnished, however. I don’t know that I agree, but if he does decide to step away, that would be understandable.

I was taken in by his Denton declarations, and published stories based off them. We cannot say for certain that they were fakes, and I hold out hope that they weren’t. However, we must now admit that the stories are tainted. I am writing this post to address those concerns, and to clear the air about yesterday’s events. This isn’t a column I wanted to write, as I mentioned.

But, my friendship with KingofPol doesn’t allow me to overlook his deception. Even with that I still feel as if he is my brother, in a very real sense. He put everything he had into this fight, just like me. Despite this terrible downfall, KoP did some wonderful things, for both me , and GamerGate. Don’t forget that. He’s a good guy, in my experience. He just made a disastrous error in judgement. His journey with us may be complete, but let’s not dishonor his entire memory.

So, with that in mind, I wanted to post this memorial that an anon sent me. It’s one of the best things I’ve read during GamerGate. This also mentions @CINDIanimation, who seems to be leaving us as well. She is an amazing person, and I wish her nothing but the very best. I’m so happy to have gotten to know her, and I want to thank her publicly for all she’s done to help with my LIVE show. This also has KoP’s first name in it, so I hope no one takes issue. The info is on Encyclopedia Dramatica, anyway (just like mine). So, whatever.

Let us drink to the fallen, and remember all the good times we shared. Perhaps we will meet again down that GamerGate road, Pol. Thank you for all that you’ve done, and I wish you absolutely nothing but the best. 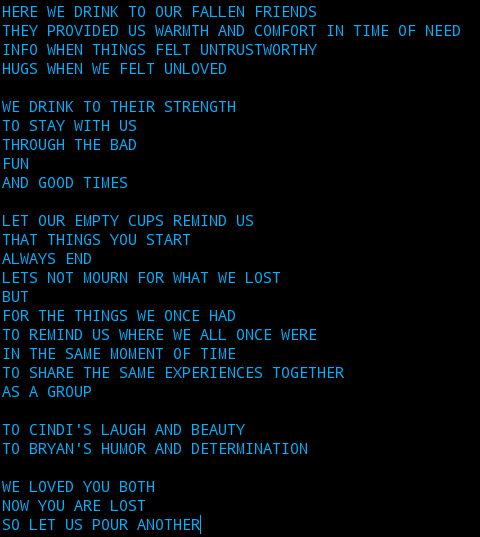