In our last report, we showed that the relationship between controversial developer Zoe Quinn and Kotaku journalist Nathan Grayson, went perhaps a bit deeper than they had publicly claimed. In fact, immediately after the report’s publication, Ms.Quinn let slip in a tweet that Grayson was a tester on Depression Quest. 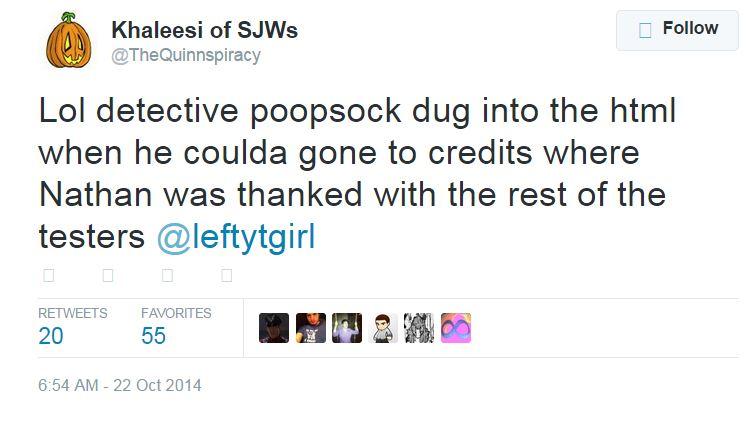 Grayson, for his part, then denied testing the game – somehow in the very same breath in which he admitted to testing it. 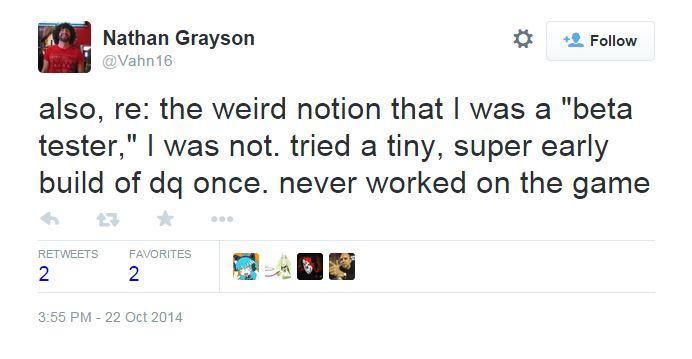 In his interview with The Escapist, Brad Wardell states that whenever he’d:

“send copies of a game to a journalist to get critical feedback on before it ships, they have always (as in 100% of the time) recused themselves.”

“There wasn’t enough to write about, but I offered a couple lines of feedback. They basically amounted to, ‘This is a neat idea, but when I went through this these sorts of things happened.’ I battled depression for a pretty significant chunk of my life, so I felt like that input was warranted.”

It seems the times have changed, Brad. And Nathan Grayson’s brand of journalism is leaving you behind.

The Kotaku/Quinn/Grayson party line here is that there wasn’t any sex-for-coverage, so it’s all kosher. GamerGate was clearly, clearly, in the wrong. Well, I guess it would cool, if we wanted to be oblivious to the greater context of their involvement, and pretend that sex-for-coverage is the only possible bias. But let’s stop pretending to be fools for a minute, and look past that tired red herring. Eron Gjoni said something once on KingofPol’s show that stuck with me. It’s not about sex-for-coverage…it’s about coverage-for-sex

In a Twitlonger post after our story last week, Grayson claimed:

“People are getting bent out of shape about this because it looks like evidence that Zoe and I were close way back in 2012/2013. We were not. I’d interviewed her in 2012, and some time after that she sent me a build of Depression Quest to show me what she was working on.”

Do we have any evidence to suggest that Nathan may have been a bit less than truthful in this tweet? Evidence that maybe he had the hots for Zoe for some substantial length of time prior to covering her?

Actually, we do. And it’s from someone who used to be close to both Quinn, and Grayson.

The following tweets begin almost a month before the movement now known as GamerGate even started, from an account that was created in 2011. The first few tweets are provided merely for context (Sorry in advance, Zoe). These have been seen before on some boards. Hell, I remember seeing some of the earlier ones myself. These are legitimate.

Now we move into GamerGate territory…

Yes, you read that right. Apparently, the relationship between Quinn and Grayson goes back quite a ways, one sided as it may or may not have been. I’m hoping that I will be able to bring you more background and commentary from the person behind those tweets in the near future. They are understandably reluctant to come out publicly.

In the meantime, mull over the situation.

And these are ALL THE SAME JOURNALIST.