Earlier today, a young member of La Raza posted some tweets that got a lot of attention. Basically, she broke the project of her white classmate because it happened to have the Confederate flag on it.

Now, I have no special affinity for the Rebel flag, even though I’m from the South. I don’t hate it, either. I’m just saying, my room isn’t decked out like the General Lee from The Dukes of Hazzard. And while I can understand where a minority is coming from when they say they hate the flag and what it supposedly represents, I draw the line at destroying someone else’s private property. Not only that, this behavior could end up negatively affecting her classmate’s grade.

So, my team and I went on a digging mission and discovered this girl’s high school. I messaged her and asked if there’s anything she would like to say for this post and that I was going to contact said high school.

At first, she denied the school I named was the correct one… 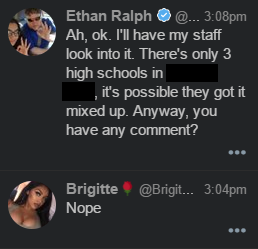 My thoughts after that denial? 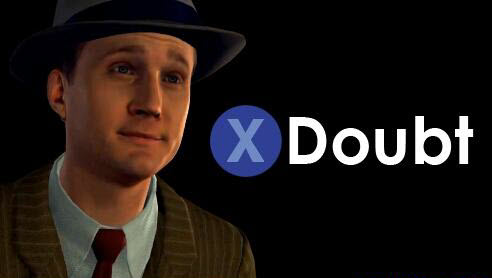 Then, she immediately went back and deleted the tweet where she both confirmed her high school and said that half of her fellow student body looked like school shooters. Since I’m always here to help, I sent her this in response… 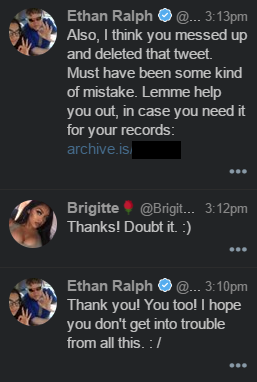 She was very appreciative, so I know I did the right thing.

The funny part is, she has a really big thing about calling other people racist.

It looks to be some sort of subversive call for revolution (“Chicano resistance”), complete with the hashtags #notmypresident and #VivaLaRaza. In case you don’t know about La Raza, here’s a primer…

To close, I will simply quote José Angel Gutiérrez, one of the founding members of La Raza. You may draw your own conclusions on what La Raza is from there.

“We have an aging white America. They are not making babies. They are dying. The explosion is in our population … I love it. They are shitting in their pants with fear. I love it.”

Sounds like another tolerant leftist, as Paul Joseph Watson likes to say. Oh, by the way, I did reach out to the principal of her school. As of publication time, I have yet to hear back. 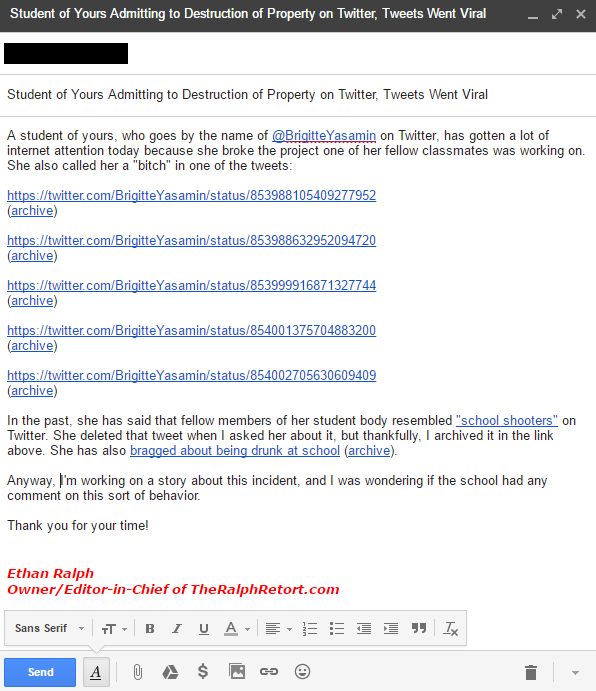 That’s right, I forgot one of the tweets I mentioned in the email.

“Brigitte’s” tone also changed after I spoke with her. She’s no longer disputing the whole school thing.

And an MTV writer supports her destruction of property. I would expect an MTV goon to embolden this sort of behavior, so there’s no shock on my end.

We’ll see what happens. Hopefully for “Brigitte,” her principal is a forgiving woman.