Well, we’ve had everyone media outlet you could imagine shitting on GamerGate, so I guess it’s only appropriate that the entertainment arm of the media get the shekels out of the deal. NBC’s Law & Order: SVU will be broadcasting another “ripped from the headlines” show, this time using the bogus media narrative about GamerGate as inspiration. We haven’t heard all the details about the show, but a preview synopsis has been released.

Speaking of the preview, here it is below for your viewing pleasure (clicking takes you to the site): 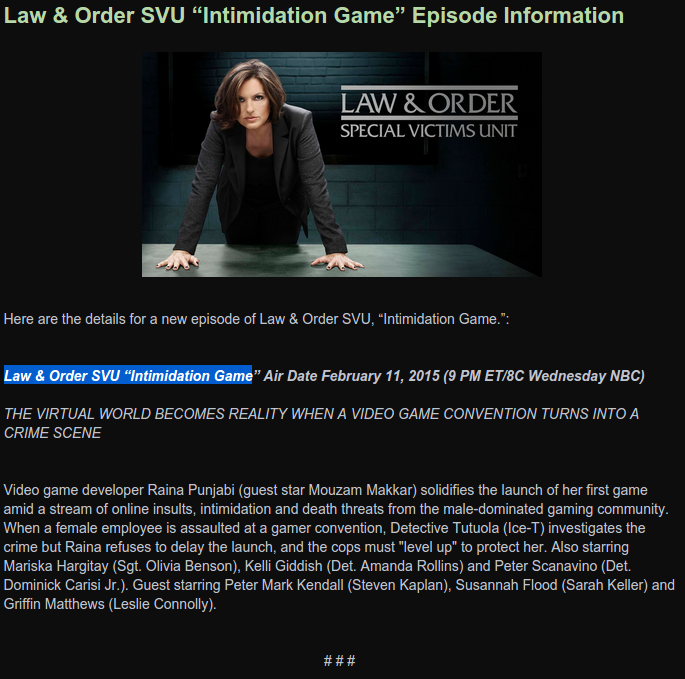 I’m not going to hold out much hope for a fair representation of our cause. I only hope they at least think up a decent stand-in name. They could just use GamerGate, since it’s not trademarked or anything. But I imagine they will think a fake one. Or, maybe they’ll just stay away from that and make it gamers in general. I have no idea, but either way, this doesn’t look like it’s going to be a positive portrayal.

I guess Anita, Zoe, and Brianna are all having a toast tonight. The bad press that they crave is only increasing. Now, cheap-shot artists like the Law & Order: SVU writing team are coming in to take their turn. It’s only a matter of time before there’s a Lifetime movie, or some shit. I bet Oprah has her eyes on this in some way. There’s literally no telling what we might see next. I wouldn’t expect much out of any future Hollywood or news media takes on GamerGate. They could make a compelling one just by sticking to the facts, but that would piss off too many SJWs, so we can’t let that happen.

EDITOR’S NOTE: I’m gonna stream this episode live on my Hitbox channel, for the GamerGate community. I’ll discuss it more as the air-date approaches.

UPDATE: Zoe Quinn has put out an admittedly humorous tweet about the upcoming episode, and Engadget has picked up on my report.

Looks like Engadget has picked up on my report…#GamerGate pic.twitter.com/zgmGGgVyvH

Here’s a picture of the main guest actress on this show…the one supposedly being harassed. She doesn’t look like most SJWs, let’s put it that way: