OK, the title is a little fun, because by now, the dummies over at GamerGhazi know we have people in their chat. But they still speak like we don’t, so I thank them for that. Early this morning, I was handed a chat log by @jackal40961. I can’t independently verify the contents, but it would take a lot of work to pull off fakery of this magnitude, and it appears to be a full transcript. After I mine it for news, I will put out the full log. I also have another full log from the last Ghazi leak story, so I will release that along with it.

Before we get into the main course, let me list the tweets from the last couple hours, where I already leaked some of the chat:

Looks like I have a secret Ghazi fan. "I really only looked once" lol#GamerGate pic.twitter.com/vcTJtQUh1D

Now, onto the meat of this article. First-off, Blocklist Blockhead Randi Harper has been talking about her contacts at Twitter. I haven’t been following her activities closely enough recently to say whether or not she has revealed any of those, but she does here in the Ghazi chat. Apparently she’s tight with the “head of safety,” and recently met with them. The person who matches that description the closest is Del Harvey, Head of Twitter Trust and Safety. You may know her from To Catch a Predator. Yes, that’s right. She was the one acting like a little girl/boy for Chris Hansen during many of his busts. Here’s a couple tweets about what I discovered with her. 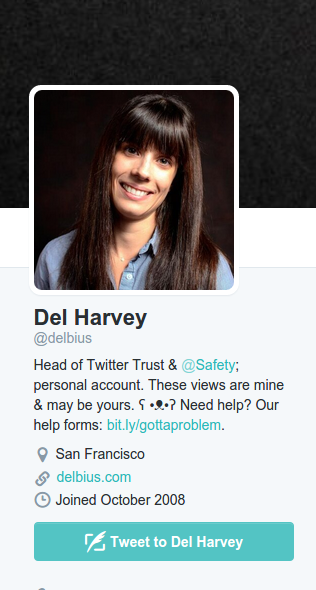 Interesting, isn't it? One of the first ppl Twitter's Head of Trust & Safety followed was @JimSterling.#GamerGate pic.twitter.com/rELZx9lCeE

Who's this lady, Jim? #GamerGate pic.twitter.com/DpuRk0Fhnq

Before I get to more leaks, I want to warn you, many of these excerpts contain discussion of a suicide attempt by one of our more prominent members. I didn’t see any Ghazi people wishing her dead (thankfully), but her predicament did not stop at least one member from trashing her repeatedly. Some will likely criticize me for releasing this, but I think it needs to be seen. One user even mentions Randi Harper having doxed the Facebook group that person started, and how she had a “meltdown” after that. They never put two and two together and think about Harper having possibly contributed to this tragedy, but allow me. While it’s unfair to blame her directly, I know they would not cut us any slack under similar circumstances. So it’s completely fair to point out all the hell Randi has put her through, whether it had anything to do with this, or not.

I wonder if Big Randi Harper thought about the mental anguish she was causing when she doxed all those FB groups? Doubt it. #GamerGate

More possible news? The same guy who was featured in the first leak story, says Zoe Quinn wrote some of the code for Fez. I have no way of knowing if that’s true, or not. I haven’t heard it before myself, but I may have missed it somehow. It could be out there already, but it seems like I would have remembered that lol…

That’s all the news I’ve gathered out of the log so far. I’ll look through it again tonight, and see if I find anything else. Either way, I will put both logs up in a pastebin sometime this week and let people examine their contents. Again, these logs can’t be confirmed 100%. Few chat logs can. But I’m very comfortable with printing them. They come across as completely legitimate, and I have little doubt about their veracity.