I just got through reading one of the best columns I’ve ever had the privilege of laying my eyes on. No, I’m not overselling it. This shit was that fucking good. It was written from the liberal viewpoint. I don’t talk about my political views much, since I’m sick of politics, and my writing here doesn’t really touch on it much. But I’ve always been a liberal. I’m not ashamed of it. What I am ashamed of, is the way the radical feminists and PC warriors have slowly exerted their will over the years.

Make no mistake, these people are in the minority. Most Democrats in America are not feminists. Most women in America aren’t even feminists. The rank-and-file, for the most part, reject the rad fems and their methods of ostracization (not to mention censorship). But their ruthless tactics and prominence among academia makes them a formidable foe. Until now, no prominent liberal has been willing to speak out. I understand why. The SJWs are quite skilled at ruining your career, particularly if you’re on the same side as them. Doors that used to be open instead slam shut, you’re vilified in their media, etc. It can be the end of a career.

Good think Jonathan Chait doesn’t give a fuck. He dropped so many redpills in this article, it’s unreal. I went through screencapping, and ended up with about 20 selections. I’m not gonna put that many here, but needless to say, everyone in GamerGate should read this article. Yes, it’s quite long. But it’s also quite good.

Here are a few screens (although not all 20): 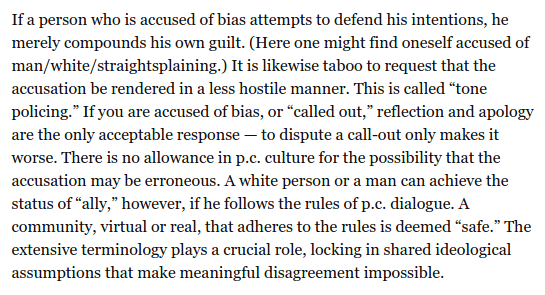 Take a look at a couple of the examples he gives of the PC culture run amok. This has been slowly escalating over the last decade. It’s now reached the point of absurdity: 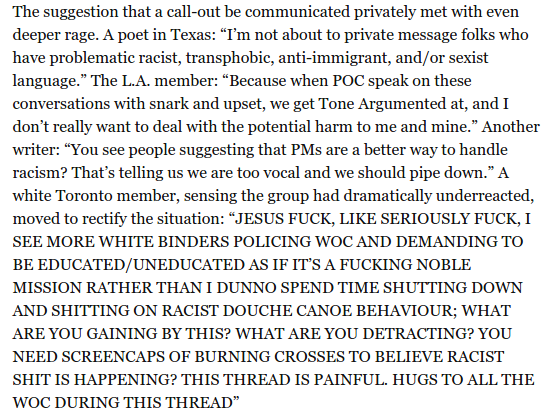 I can’t think of a better example of a crazed SJW. Here you have someone saying that they should be checking to see if a minority is challenging your views, and if they’re not, you’re probably being a racist piece of shit. Well, maybe they should challenge something then, if they feel that profoundly about it. It’s not up to me to “check myself” because someone else is too big of a pussy to come out and challenge what I’m saying. Fuck that, and fuck the thought police type nature of such a suggestion. “HUGS TO ALL THE WOC DURING THIS THREAD?” HAHA, I’m sure they’ll need therapy over a motherfucking Facebook thread. Give me a break.

If you think that’s bad, take a look at Chait’s next example: 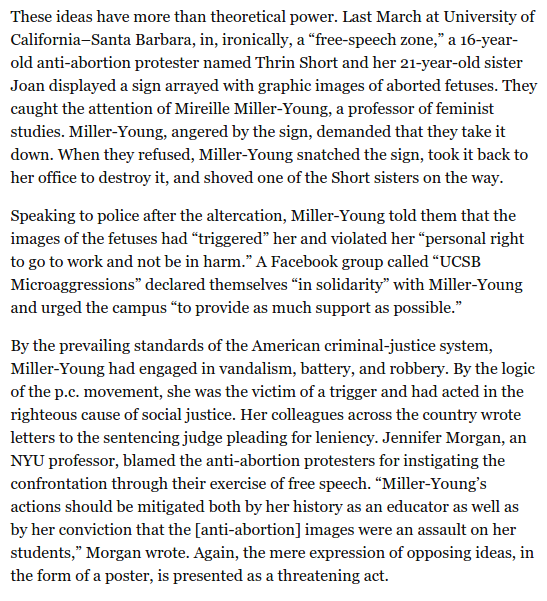 This is what it has come to. A psychopath SJW professor is allowed to accost young women and destroy their expression of free speech, simply because she was “triggered.” Well fuck, I’m triggered by not getting free Air Jordan’s and all the weed I can smoke. Maybe I’ll rob Foot Locker and setup my own grow-op. Or, I’ll just start robbing drug dealers like Omar on The Wire. Who gives a fuck if you’re triggered, you psycho bitch? She better be glad it wasn’t my sign that she grabbed, cause I would have probably broken her fucking arm. Are you kidding me?

Chait dropped a megaton bomb on the purveryors of PC culture yesterday, and as you can probably imagine, they weren’t happy. Here’s Alex Pareene of Gawker going off about it today. Chait’s tweet about it is provided above:

Dan’t click that link if you want to read the Gawker shitpiece. Click here on the archive link instead. Here’s a screenshot provided below, just in case you don’t want to click on anything at all: 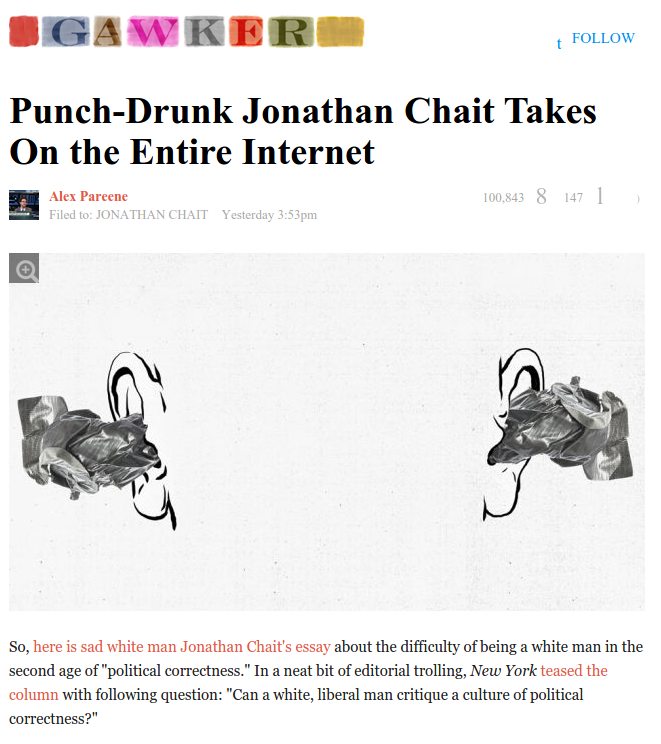 “Sad white man” tells you all you need to know about Pareene’s intellectually bankrupt critique. He would rather throw around racist insults than actually argue what Chait said. And when he does try to dispute Chait’s thesis, he can’t help but throw in phrases like “petulant man-baby” and continually remind the reader that Chait is both straight, and white (THE HORROR). In short, it’s not a very serious response, which I know is a shock, coming from Gawker.

Andrew Sullivan had a nice take on it, though. Here’s a select cut from his post (unrelated: today Sullivan announced that he was retiring from blogging):

“…The only “dialogue” much of the p.c. gay left wants with its sinners is a groveling apology for having a different point of view. There are few things in a free society more illiberal than that.

And the paradox of this within the gay rights movement is an astounding one. For the past twenty years, the open, free-wheeling arguments for marriage equality and military service have persuaded, yes, persuaded, Americans with remarkable speed that reform was right and necessary. Yes: the arguments. If you want to argue that no social progress can come without coercion or suppression of free speech, you have to deal with the empirical fact that old-fashioned liberalism brought gay equality to America far, far faster than identity politics leftism. It was liberalism – not leftism – that gave us this breakthrough. And when Alabama is on the verge of issuing marriage licenses to its citizens, it is the kind of breakthrough that is rightly deemed historic. But instead of absorbing that fact and being proud of it and seeking magnanimity and wondering if other social justice movements might learn from this astonishing success for liberalism and social progress, some on the gay left see only further struggle against an eternally repressive heterosexist regime, demanding more and more sensitivity for slighter and slighter transgressions and actually getting more radicalized – and feeling more victimized and aggrieved – in the process.

“Any “success ” for one minority means merely that the oppression has been shifted temporarily elsewhere. Or it means that we dissenters in a minority have internalized our own oppression (by embracing the patriarchy of civil marriage, or structural hegemonic violence in the military) and are blind to even greater oppression beyond the next curtain of social justice consciousness. Or we find out in bitter debates about who is the biggest sinner, that in some cases, are actually more white than we are female; or more black than we are trans; and on and on. This process has no end. And almost as soon as it begins, many people in the gay rights movement or in feminist movement will soon find themselves under attack for not being sufficiently enlightened, and, in fact, for being complicit and even active in others’ oppression. Chait has a great dissection of what Michelle Goldberg has also observed among some contemporary feminists – an acrid, self-defeating, demoralizing and emotionally crippling form of internecine warfare that persuades no one outside the ever tightening circle of true believers.

Someone has to stand up to this, with more credibility with liberals than I will ever have. Freddie has; Yoffe did; Goldberg went there; and now Chait has written the liberal manifesto to fight back. Read it.“

I couldn’t have said it any better myself. This is one of the most important columns that I’ve read in my life, and everyone that cares about the PC culture taking over society should read it, and internalize it. It took awhile for a mainstream liberal pundit to express what most of the base thinks. These SJWs are in the minority everywhere, except in the elite media and the ivory towers of academia. Don’t let their bully tactics fool you. They’re lacking in numbers, and their arguments are trash. The only way you can lose, is by accepting their rules of engagement. Fuck that. I never will.