As you may know, I’m not a fan of the unbearable faggot known as Drybones. I just heard thousands of you ask me in unison: “Who the fuck is Drybones?” That’s a fair point. He’s not someone who’s all that well-known, and for good reason. The guy is a sperglord of the highest order, who cultivated a gang of trolls on Twitter so they could go out and slander his enemies. Then, when he eventually got his ass handed to him and quit GamerGate like the bitch that he is, the clown turns around and sells us out completely with a laughable interview today with Vocativ.

If you ask the man behind the online handle “Drybones5″ about the current state of the controversial #Gamergate movement he helped create, he’ll tell you, “it’s over. It was over in December.” But that might just be the sour grapes talking—the reality is Gamergate, an online movement best known for its crude, degrading take-down of women in the video game industry, is bigger than ever and it’s been spreading rapidly since its birth in August of 2014.

Drybones helped create GamerGate, huh? That’s news to me. I know he threw up a couple websites (that other people ran…poorly) and hosted some content (again, from others). But I certainly would never call him a creator. The mere thought of that is fucking hilarious. Internet Aristocrat is a founder. This guy is some guy who hangs around Hotwheels like a sycophant. He’s done nothing much of note. By the way, I’m not the only one who found this amusing:

“Been in this since day 1 and never heard of him.” You didn’t miss much, dear redditor.

Not only that, the article itself was full of lies and distortions. Cathy Young was severely misquoted, as she mentioned on Twitter. Here’s that screenshot, followed by her tweet: 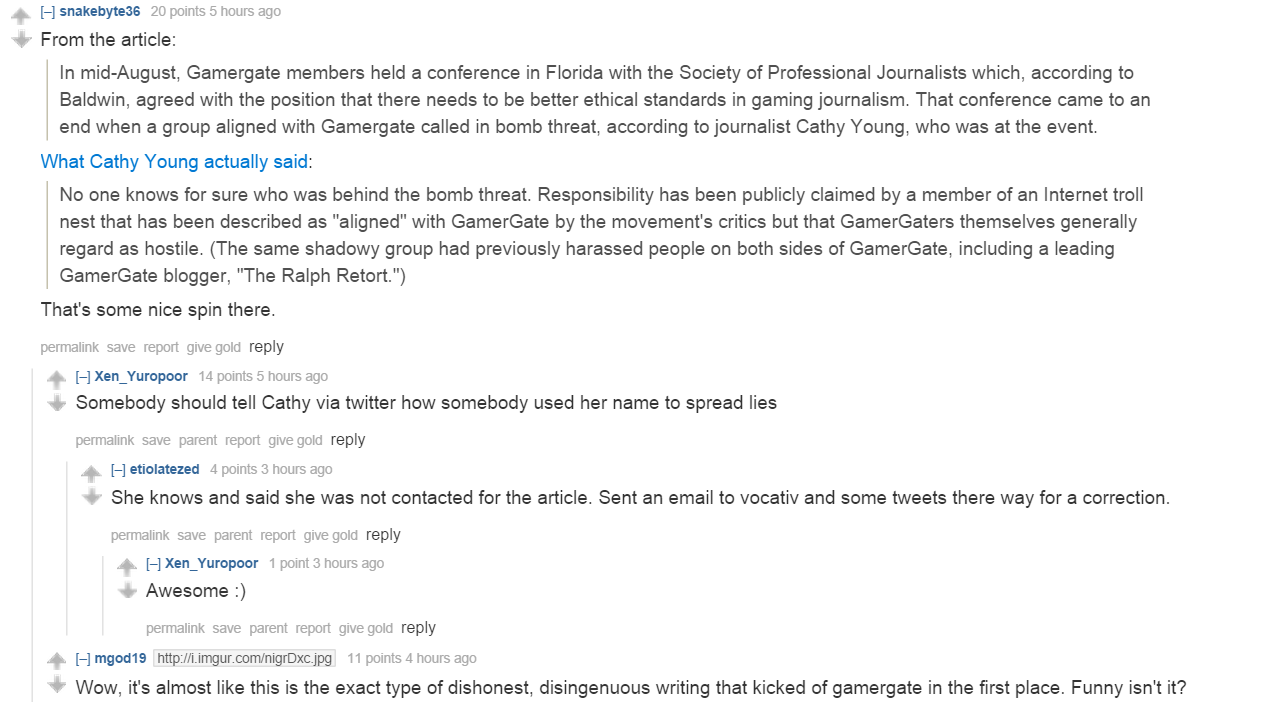 So, an ex-GamerGate crybaby, who I (and others) called out for being a scheming, disloyal bastard back in January, appeared in a hatchet-job shit piece that was full of lies and distortions aimed at his former brothers-in-arms. Why anyone would even listen to this shit is beyond me. I’m only talking about it to point out how factually inaccurate it is. They portray him as having been driven out, presumably by me, when in fact he quit GamerGate of his own accord months earlier.

The guy above is one of the bigger idiots in GG, and even he knows that Drybones is disingenuous. This guy quit months ago. But what does this insanely inaccurate article say? Just read some more of this trash for yourself:

“Drybones is being a Asukafag again and doesn’t seem to recognize the fact that GamerGate isn’t his personal army. And just because he’s operating gamergate.me doesn’t make him some kind of High Ranking Officer,” a commenter wrote in a post on the video game chat forum the [The]RalphRetort.com after “Drybones” and another standout “gater” got into a public cyber-pissing match and their “factions” went to war, which in Gamergate means writing snarky comments about other people on message boards and chat forums…

The Gamergate movement has been successful in many areas – harassing and intimidating people and targeting large corporations they hate with online attacks and email campaigns. It has failed, however, in identifying a unified agenda and backing a single leader to achieve it. Drybones5, and others like him, who have a more  moderate agenda are getting bullied the most by supporters who harbor anti-feminist and anti-social justice motives.

It’s hard to express how wrong this is. First off, my site is not a “video game chat forum,” despite the fact that I talk about the industry and its media a good bit. I talk about a lot of things here, though, and so I don’t think that’s accurate. Also, I have no clue what ideas Drybones has in his mind, but responding to orchestrated attacks is hardly out of the norm. But forget all that. The post goes even further, and outright lies about how he left GamerGate: 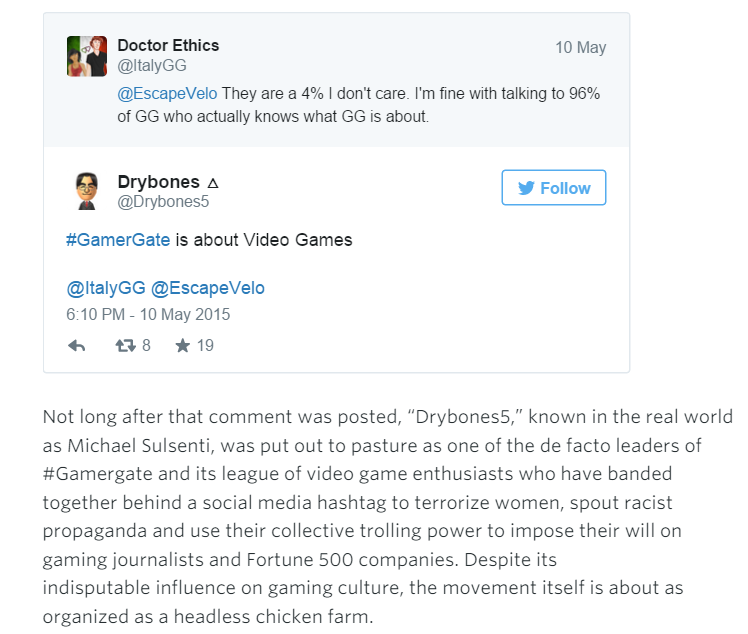 More lies from one of the worst articles I’ve ever seen written about us. How appropriate that a turncoat piece of hot garbage like Michael Sulsenti (a.k.a., Drybones) would be the main source in a joke like this. It’s so bad that I don’t see anyone paying much attention to it, except to laugh at it and make fun of this loser. The KotakuInAction thread was thin as fuck, with most just wondering what the hell is going on. There was indeed a faction in GamerGate, and Drybones was one of its leaders. But they’re up in smoke now, and have turned to full-time trolling and lying. This is the end result. Point, laugh, and move on, because their time is up.