UK Man Gets Charged Over a Tweet. Is This the New Normal? (UPDATE: Sanity Prevails, Charges Dropped)

You might have heard about Matthew Doyle. I meant to come write something on his plight this morning, but I was looking for a guest contributor to weigh-in. That didn’t come to pass, so you’ll just have to make due with lil ol’ me. The most notable thing about his predicament is that he was charged in for a tweet. We’ve seen this sort of thing before with Gregory Alan Elliott, but although that was also complete garbage, at least he tagged someone. Mr. Boyle did not. 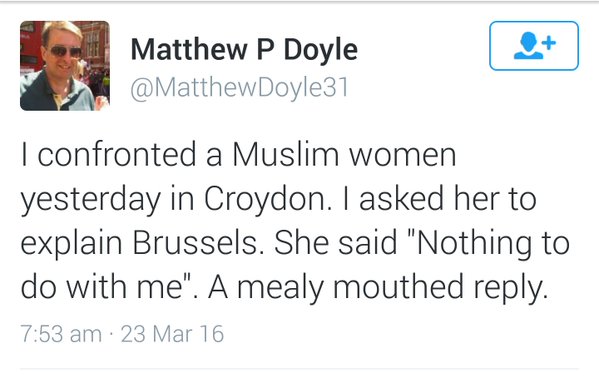 Is this something I would have done? No. It isn’t. But does it rise to the level of charging this guy? No. It doesn’t. The police across the pond don’t agree, though.

Scotland Yard said he was charged after an investigation by officers at Croydon Police Community Safety Unit.

A statement issued by Metropolitan police in Friday said Doyle had “been charged under section 19 of the Public Order Act 1986; publishing or distributing written material which is threatening, abusive or insulting, likely or intended to stir up racial hatred.”

The 46-year-old will appear at Camberwell Green Magistrates Court on Saturday.

Keep in mind, this guy was charged over a tweet that merely described the incident. He wasn’t charged over the incident itself. I have to wonder if this is what the world of social media is now coming to. I know this is in the UK and that we have much stronger free speech protections here in the US, but still. How long until this sort of thing becomes a regular occurrence all across the world?

Had the tweet in question advised people to go smash Muslims or burn down their houses, I could understand. Looking through his feed, I could probably point to several other tweets that are much more vitriolic than this one. I can only sit here and shake my head in disbelief over the one they police picked. I suppose they’re trying to make some sort of example out of him as a warning to others.

Free speech is truly under attack just about everywhere you look. Forget Twitter for a moment. This is happening on college campuses, in public meeting places, out on the street…pretty much anywhere you can think of. If you have a problem with what someone has said, eviscerate them in print. Point of their stupidity to the masses. Show everyone how foolish they are. You don’t arrest a guy and make him even more notable. I wonder if it’s because of all the free media this guy got over the incident. You can just do a quick Google search of his name to see that this thing is all over the place. Perhaps the police thought they needed to do something because of that? I’m not sure.

But either way, this is a troubling sign of where things are headed. Welcome to the new normal.

UPDATE: Sanity has prevailed and the charges have been dropped…

[L]ate on Friday night, the Metropolitan police released a second statement saying that Doyle was “no longer charged with the offence and will not be appearing at court”.

It said: “Police may not make charging decisions on offences under Section 19 of the Public Order Act. There will be further consultation with CPS.”

The CPS guidance says that people “can only be prosecuted [under that section of the act] with consent of attorney general.” It adds that the case must be “referred to CPS’s counter-terrorism division to be dealt with by specialist prosecutor”.

The offence carries a maximum jail term of seven years.

Doyle, a partner at a south London-based talent and PR agency, was arrested in Croydon on Wednesday after posting a series of tweets.