Mashable Hacks Got Precisely What They Deserved: Unemployment

At the outset of GamerGate, I participated in a campaign known as Disrespectful Nod. Newcomers to the site might not be familiar with it, so let me break it down. It won’t take long, since it was very simple. First, we would identify the outlets who were corrupt, had committed ethical violations, or were just SJW scum-spewers. Then, we would bombard their advertisers with email after email until they pulled their support. This worked for several months, and just about every success is documented here on TheRalphRetort.com.

Then one day, it stopped working. There are several reasons for this, but the main one is that advertiser pullouts came to be seen as capitulation to a ‘hate group,” which is what the media had branded GamerGate. The pendulum then swung back the other way, with Intel (one of the most high-profile advertiser pullouts) giving $300 million to “diversity” initiatives and fraudsters like Anita Sarkeesian’s Feminist Frequency.

I’ve come to regard Disrespectful Nod as a mistake, simply because on a basic level, it’s anti-speech. I realize not all of you agree with my new conclusion, but then again you probably haven’t had your advertisers shutoff for flimsy reasons. Also, as we’ve recently seen, these sprawling media companies are doomed to fail on their own. Our main goal should be making videos, spreading blog posts, and just generally wrecking their shit rhetorically. We saw a big drop in morale when the advertiser campaigns stopped working and many people left the cause altogether. Of course it could be argued that those were weak supporters anyway, but I do think advertiser assault strategy played a role. It was never going to shut these places down. Their public relations embarrassments and sprawling budgets will, though.

Take the recent case of Mashable, for instance. They’ve historically been one of the most anti-GamerGate, pro-SJW outlets in existence. The number of times that I’ve read misinformation coming from them is staggering. I don’t have as many of those cases archived here as I should, since they’ve never been one of my main targets of critique. Still, here’s one that I wrote about last fall.

The following is from Mashable’s own copy…

While the two panels appear on the surface to cover similar ground, they actually fall on opposite ends of the political spectrum (such as it is in the gaming space). The “SavePoint” speakers have all been connected to the “GamerGate” hate group (as defined by the National Coalition Against Domestic Violence) at some point or another, and the panel had been painted in the media as a “pro-GamerGate” talk.

Meanwhile, the “Level Up” participants have all spoken out against the activities of GamerGate, both through social media and through their own work. As Cross told Jezebel, the panel wasn’t meant to address GamerGate directly, but rather “the wider problem of online harassment.”

Pure trash, again and again. Where does that lead? The unemployment line. Not only that, the people who used to work there are now turning on their former bosses, accusing “bros” of being the reason they got fired. 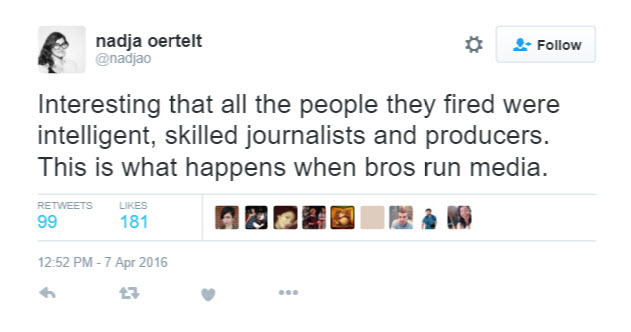 There’s more loyalty among thieves than there is with SJWs and their mouthpieces in the media. When you spread bile and misinformation the end result is the unemployment line, especially if you have bloated budgets and staff like Mashable. There’s no pity coming from me. They got precisely what they deserved.