I recently started smoking semi-regularly again after being off cigarettes for 10 years. To be fair, I only smoked about 4 packs over 2-3 weeks. But, when I started going back to the gym in order to kick in the next phase of my weight loss (been stuck at 240 for months), that shit was definitely noticeable. My lungs were hurting bad. Smoking is about as retarded a thing as you could possibly do and I knew that they whole way through. So, I’ve stopped the practice once again and don’t plan on ever going back. I don’t belittle any of you here who continue to smoke, but I would advise you stop stop as soon as you can. It’s simply not worth it, plus it’s pretty damn expensive here in the United States.

Another person who wants you to quit smoking is Vladimir Putin. OK, to be fair, we don’t know that he was directly responsible for the ad I’m about to show you, but I think there’s at least a chance that he had a hand in bringing it about. Then again, according to someone on my Twitter feed, Obama is a legendary lolcow there in Russia, so I guess it could have been anyone. Here’s more, from The Hill…

“Smoking kills more people than Obama, although he kills lots and lots of people,” the ad states, depicting Obama with a cigarette. “Don’t smoke, don’t be like Obama.” 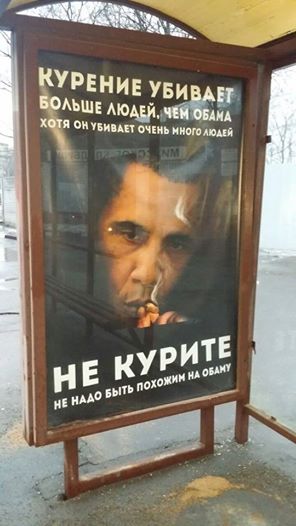 Wow, that’s a pretty funny tagline, although I gotta be honest: Putin kills plenty of people himself. Still, this made me laugh pretty hard earlier, so I wanted to bring it here and let you guys laugh as well. Apparently they are going to be taking the ad down, but at least we all were able to get a kick out of it first.