Matt Jarbo, aka MundaneMatt, Tried to Set Keemstar Up With the FBI

I didn’t expect to be doing anything else on the Matt Jarbo (aka MundaneMatt) front today, but sometimes, ladies and gentlemen, the shit just falls in your lap. Like when Keemstar tweets at me and says that Jarbo set him up to take the fall for a swatting attempt a couple years back. Yep, that sounds just like MundaneRatt. And thankfully, he admitted to the whole thing!

First off, let’s hear from Keem…

2 year sago @mundanematt was swatted. He made a vid milking the situation saying he knew who swatted him. Then FBI was as at my door. MATT told the police I had him swatted. No one should ever trust him he has no integrity at all & he should not be verified.

He never apologize to me at all for this. If I remember correctly he said “I told police it might be you”

We had a Twitter beef so he decided the best way to get back at me is to file a false police report accusing me of a serious crime.

Matt Jarbo, sperglord that he is, proceeded to admit to the charge.

I don't owe a fucking apology. The police asked me if I'd been in any fights. I said yes. Because you and I were. Still told the detective didn't think you personally did it. But they apparently thought enough of you to go and investigate. That's not on me.

THEN, he got so mad at Andy Warksi for having the audacity to talk about him on the Kumite today that he decided to leak all their private Twitter messages. This becomes even more stupid after you read the actual messages, because they show that Andy was being extremely nice to the guy. 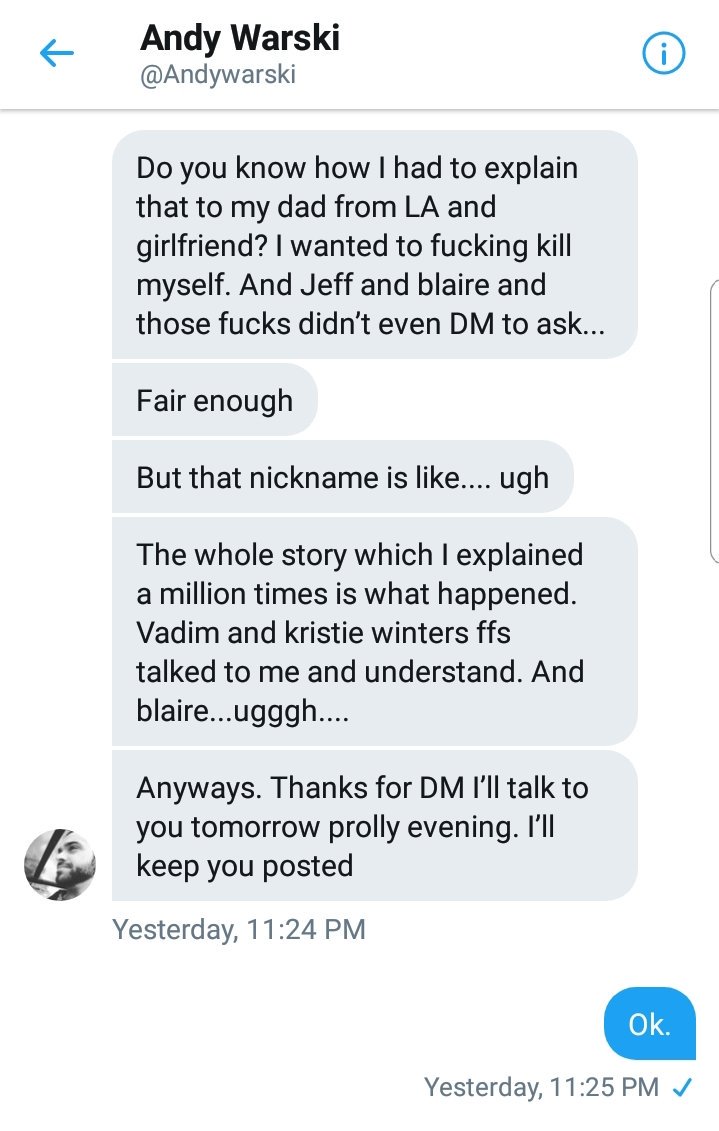 I honestly don’t know where Matt Jarbo is going to go from here. From what I’m hearing in private, though, this is all hitting him very hard. He’s distraught about no one liking him anymore. I’ve got some news that might cheer him up, though. No one liked you in the first place, Matt. So, don’t worry about it! It also makes me chuckle when I think about all the shit I’ve gotten, including from Jarbo himself. He attacked me, he attacked my wife (which was insanely out of line), and now he acts like some kind of victim. Good lord. Stop being such a little bitch. Be a man, for fuck’s sake.

This is sad. I would advise him to delete everything, but we all know he could never do it. Instead, I will just sit back and laugh. He had a lot of fun while I was gone. Many laughs were had. Now who’s laughing, Matt?