Ooook, this column is late. I realize that. But here I am. I wanted to do a piece on Mattress Girl Emma Sulkowicz. I ALSO wanted to do a piece on the psycho from Goldsmiths’ University (UK), Bahar Mustafa. So, what’s you’re friendly neighborhood muckraker to do? Combine the crazies into one column, of course! I’ll give a brief rundown, for the few of you who haven’t heard about these stories, and also talk about what all this tells us about our corrupted media.

I did a post about Ms. Sulkowicz once before. Well, it was actually more about how Jezebel was trying to slime GamerGate defender Cathy Young over her Daily Beast column. Why would they do that? Because Cathy blew the whole fucking story out of the water, and showed Matress Girl to be a liar.

More from my last piece:

Cathy has been investigating some dubious rape claims against a Columbia University student. She unearthed some evidence that puts the claims against him in a new light, and has been catching heat from the usual SJW corners of the internet because of it…

I don’t want to screenshot the whole article, cause you need to go read it. But it blows hole after hole in the story of the accuser. It’s really an amazing story. Even after being cleared by the university, this guy’s name was dragged through the mud by this publicity hungry “victim.” She carries a 50-pound mattress around campus to and from classes in an effort to shame him into leaving school. She slimed him in the New York Post, and even enlisted the help of a United States Senator to spread this shit.

As you can see, this is a fucked up situation. Mattress Girl ran around spouting all kinds of lies, and by the time anyone could even attempt to properly set the record straight, she was already a hero of the rad fem left. These ideologues simply will not accept any evidence that doesn’t jive with their rape fantasies. We’ve seen this over and over again, because they’re nothing more than a cult. People who are in cults are generally averse to hearing contradictory testimony, and these lemmings are no different.

Then we have Bahar Mustafa, who’s now under investigation by the police. Talk about an offensive piece of trash. Then again, she hasn’t falsely accused anyone of rape…that we know of. So I guess she’s not quite there yet. But I’ll be damned if she isn’t trying. Here’s a little background on her, from Encyclopedia Dramatica:

Bahar is a 27 year old, privileged girl who bangs on about anarchism and communism despite living a privileged, sheltered life. She majored in women’s studies gender studies (feminists insisted the name be changed to make it look less like and obvious scam) at the prestigious and expensive Goldsmith University, which was undoubtedly paid for by her parents. She now lives in their 450,000 pound home (which is incidentally also how much her mum weighs) while insisting she is a downtrodden minority and preaching for the downfall of society, one in which she feels she would fare quite well, despite being unable to get a job, her own flat and probably having trouble using the microwave by herself.

The combination of being a rich, 20-something, living at home, jobless college grad with a degree in feminism and an anarchism t-shirt, means Bahar couldn’t be a bigger cliche if she had brightly coloured hair, a nose ring and daddy issues. Which, of course, she does. 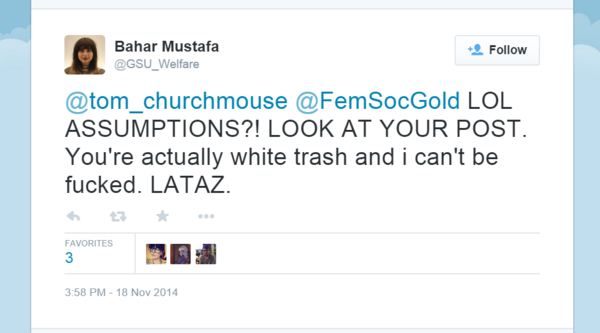 That’s all true, although I can’t testify to the daddy issues part. I think it’s safe to say it’s probably true as well, though. What’s her major malfunction? She hates white men and talks trash about them at every turn, bans them from events, and calls them white trash from her official university Twitter account. If this were any other subset of people on earth, she would be excoriated by the media. Instead, we get gems like this one:

Feminists were irate about #HowToSpotAFeminist – but #KillAllWhiteMen is just fine. One rule for them, another for everybody else. Hypocrisy

How much do you have to hate yourself to write such contemptible garbage? I’m just wondering, because it seems like it would have to be an awful lot. Then again, the media is full of self-loathers and charlatans. These episodes prove that. There’s no shortage of press hacks trying to defend both of these nasty women. The only way to gut these stories is from the ground up. Word of mouth and social media can help. But they have access to these tools as well, and a false rape claim will haunt you forever. If only the SJW-soaked media had any sort of ethical compass.

I know. That’s the biggest fantasy of all.