Media Distortions Cause Discrimination Against GamerGate

These last few days have been pretty eye-opening. I can sit here and describe nasty SJW tactics until I’m blue in the face, but the best people to show you, are the SJWs themselves. They can’t resist coming right out in the open and sharing their plans for censorship and discrimination. As I’ve noted before, they seem to have a special problem with Twitter, as something about it makes them reveal their true nature. It has that effect on a lot of people, but it hits rad fems especially hard. That’s probably because they’re so fake, that any type of straight-shooting immediately reveals them for the censor-loving hypocrites they really are.

Just this morning, I woke up to find a Web designer from Blizzard discussing how to turn an anti-GamerGate blocklist into an employment blacklist. He apologized profusely earlier today, but this type of thing needs to be highlighted. People like Randi Harper, the low-talent stumblebum who created the blocklist, enthusiastically co-signed the idea: 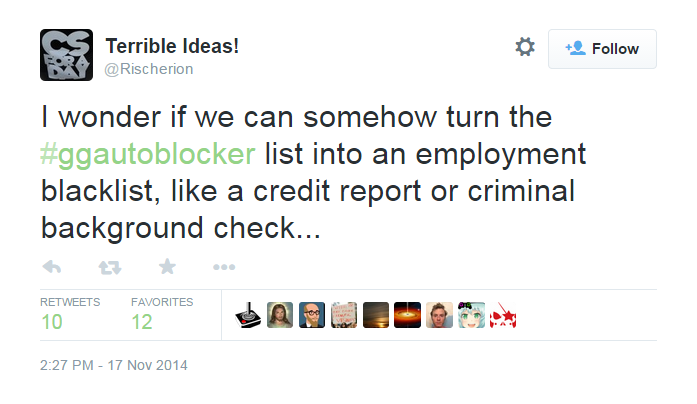 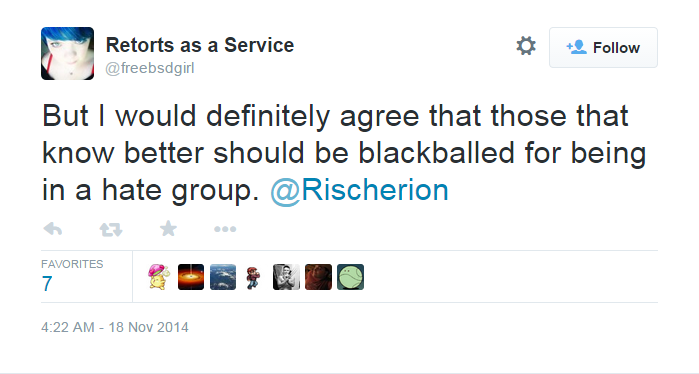 This is the method of our opponents. They want to make it dangerous for our supporters to take up the GamerGate banner. What better way to do that, than by threatening their livelihood? We’ve seen this before. They’ve already gotten people fired. This is an avenue they will continue to pursue.

If that doesn’t work, some of them may become violent. Don’t believe me? Look at the case of Steve Tom Sawyer, the head of Revue Labs. Over the weekend, he was allegedly assaulted and driven from his home by SJW thugs who believed the media spin about GamerGate. I can’t determine the veracity of these claims, but those who have seen a video video of the alleged incident, have said that they are legitimate. Can you imagine being thrown out of your home in the middle of the night over your personal beliefs? What kind of country is the mainstream media turning us into?

Yep it was about #GamerGate I got assaulted in part because after their "research" they determined I was an "internet misogynist."

It used to not be a crime to hold an opinion that wasn’t approved by our radical feminist overlords. How did we let this become the normal state of affairs? I can’t trace it back off the top of my head, but I can see why they fight our consumer cause so hard. Everyone else has rolled over. We rolled up our sleeves, and said “Let’s get to work,” instead.

The corrupt media continues to talk about GamerGate like we’re the violent hate group, but the only hate I see, comes from our opponents, and from the media themselves. The gap between reality, and the false reality they portray, is staggering. We’ll continue to persevere. All decent people will join with us in denouncing these tactics, and the corrupt structure behind them. Our best ally in this fight, has always been the SJWs themselves. They will continue to make blunders like this one, and we’ll continue to spotlight them.