You know that I’ve written about the spectre of Twitter censorship here many times. We’ve seen users banned unfairly, WAM subterfuge, and blocklists. But we hadn’t seen anyone from Twitter itself go on the record with pro-censorship policies. That’s changed in the last few hours. Twitter’s CEO has made several what I consider to be shocking statements in favor of a ban first, ask questions later, pro-SJW mentality. Hopefully I’m wrong on that, but I certainly didn’t like what I read. And of course, the corrupt cesspool known as Kotaku has decided to back this bullshit without batting an eyelash.

The post was written by Kirk Hamilton, AKA Leigh Alexander’s parlourmaid. So I already knew going in what was in store. Namely, a lot of bootlicking bullshit: 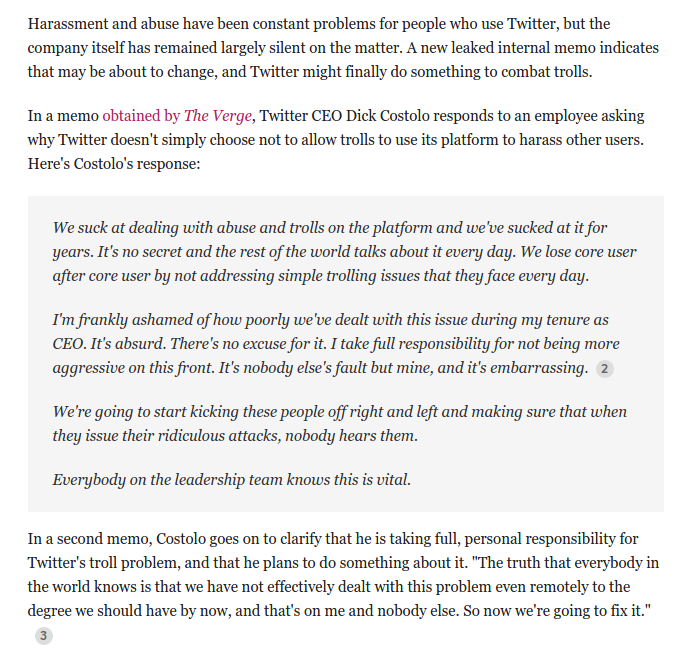 They may be a problem for two seconds, until you block someone. I’ve had people fuck with me, yea. So what? If it gets to be to much for someone, just mute or block. I’ve had to do it on occasion. I think automated blocklists/blacklists are abhorrent, but there’s nothing wrong with blocking individually.

Also, this doesn’t mean I support people who send rape and death threats, because I absolutely do not. They should be taken off the service, and in serious cases, forwarded to the proper authorities. But we can’t let those maniacs stifle speech on Twitter. Making provocative, “non-PC” posts is not harassment. I’ve never participated in that on the service, and anyone who says otherwise is a damned liar. Furthermore, anyone who says GamerGate is a harassment campaign, or hate group, is also similarly misguided.

The Verge would fall into the misguided category, since they decided to go #FullMcIntosh and somehow tie us in with the people who made Zelda Williams, the daughter of later comedian/actor Robin Williams, leave Twitter last August:

What they fail to mention is, Ms. Williams came back to Twitter around one fucking month later.  That doesn’t fit their narrative, so they leave it out. I’ve also seen several people deactivate for a few days in order to get away from the stress. It’s not uncommon, and would probably be good for everyone to do once in awhile.

But changing Twitter wholesale is a recipe for disaster. Controversial English footballer Joey Barton summed it up quite nicely, I think. I’ll leave you with his comments. They encapsulate my thoughts on Twitter censorship quite nicely. 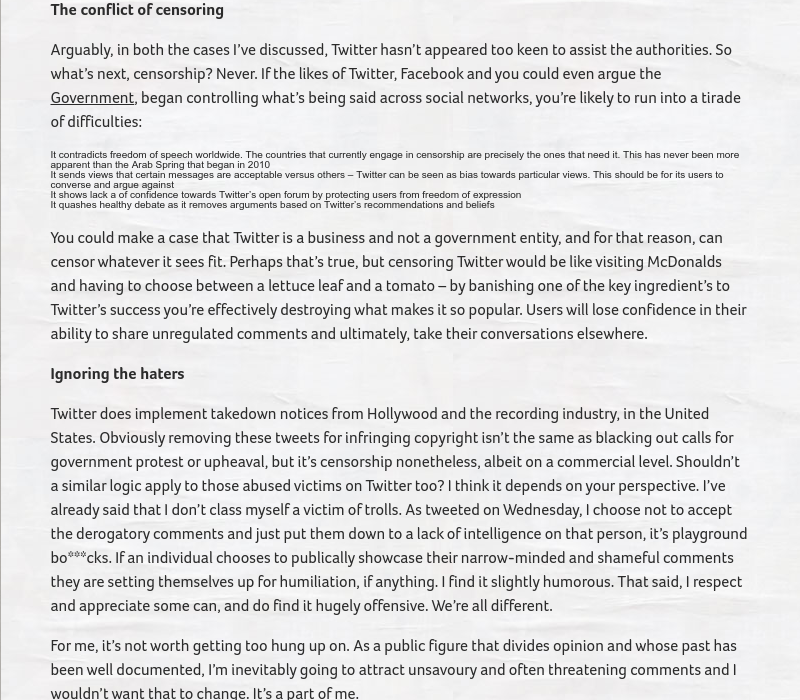