It’s been awhile since we’ve seen Phil Fish. Last time we caught a glimpse, he was DJ’ing a party for the equally corrupt Tim Schafer and Double Fine Productions. He looked like a broken man, as I mentioned in the headline. For all we know, he’s curled up somewhere with an eight-ball of Colombia’s finest and some Third World sex workers, musing on the complete fail that is now his life. No matter what his current physical status is, his reputation lies in tatters, after the allegations leveled at him by Allistair Pinsof earlier today. The thing about it is, they’ve always been out there. It’s just that we have a gaming press that’s too close to people like Fish, and they play favorites. So you probably didn’t hear about all this. Thanks, Kotaku.

Here, the rundown, on the off chance you haven’t seen it yet. First, Pinsof in the TechRaptor interview: 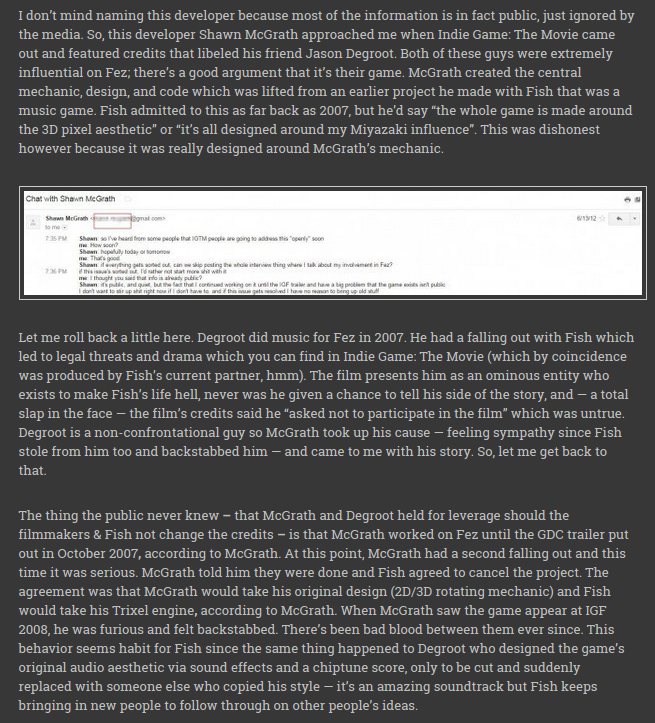 So why hasn’t there been big media digs on this? I remember a couple throwaway comments here and there, but nothing like the type of investigation allegations like this deserve. I wonder why the media would cover something like this up? Could it be the other bombshell dropped earlier in the TechRaptor exclusive? Phil Fish was tight with Brandon Boyer, the IGF chief, as well as the majority of the gaming media. Did they help him cover-up his treachery? 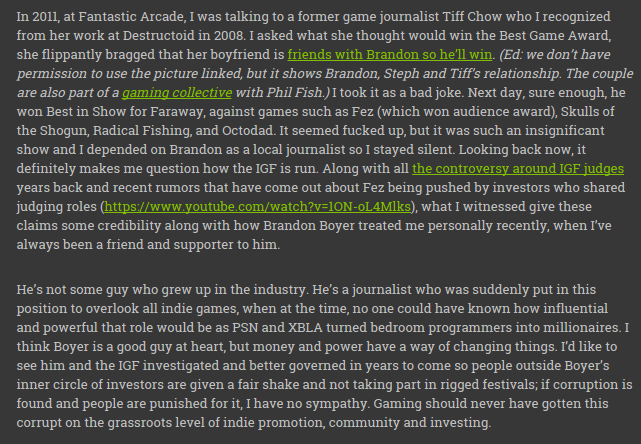 It’s no wonder we haven’t heard anything about this from the likes of Kotaku. They were too busy pushing shit games like Brianna Wu’s Revolution 60:

You see, Kotaku and all these other shit outlets are too busy promoting the latest shovelware from their friends to cover the myriad of ethical concerns that GamerGate has uncovered over the last 6 months. I wouldn’t expect them to change their ways anytime soon. Someone tried to bring this up today on a GiantBomb forum. It didn’t go well:

These media outlets are so corrupt, I don’t see a future for them. Fuck making peace. It’s time to expose, name, and shame these fuckers until they’re so discredited in the minds of the consumer, that they have no real influence. We’re halfway there now. Look at the growing power of YouTube. Corrupt journos just can’t fuck with us. We have nothing to lose, while everything is on the line for them. If we fail, GamerGate is over, and that would definitely suck. But if they lose, their whole corrupt racket goes up in smoke, and they face possible financial ruin. Take this new information and keep pushing until the dam collapses.