Tonight (now Christmas morning lol), I’m going to do the second installment of my “Merry Christmas” series. In case you don’t remember, this feature takes a look back at some of the more notorious  eccentrics that we’ve covered from the SJW agenda press. After I wrap up on Christmas Day, I’m gonna start work on a year-in-review for New Year’s Eve. Maybe a countdown of our top triumphs, and future goals at the end. It’ll be something like that. But before I get ahead of myself, lets take a look back at Little Hitler Ian Miles Cheong. We must give Mein Mini-Führer his due.

He was fist mentioned in passing during the Silverstring Agenda column, but he really had his first feature on the site when his love of ole Uncle Adolf came to light. Here’s a sampling:  (Red Print means my old writing)

LOOK AT THIS MFER @stillgray! Still trying to blame gamers, only this time, for his Hitler loving past! #GamerGate pic.twitter.com/FvlvYIYl9O

It didn’t stop from there. It’d be pretty hard yo get lower than blaming your Nazi love on gamers, but Cheong at least tried. Here’s a section from one of my other columns:

But, you don’t have to dig too deep to find skeletons in Ian MIles Cheong’s closet. There right there in your face. He used to be a powerful Reddit mod, who had a tendency to share his own shit and get thousands of hits off it. That, in and of itself, isn’t terrible. I’ve posted my own content to Reddit. But he took it a step further, and sold his influence to outside companies, according to published reports. Doing it for free wasn’t good enough for IMC.  As a mod, not only did he skirt the rules with his own stuff, he also allegedly took payola in exchange for pimping other content. He got away with this sweet little setup for quite awhile. Eventually, fellow Redditors busted him.

So, we have a morally compromised individual, who looks like he would sell out his own grandmother for a quick buck. That’s not that notable, to be honest. Devin Faraci and Tyler Malka have proven that. But not only is Cheong a money grubbing hypocrite, he’s also a former Nazi Party sympathizer.  No, I’m not making that up. Take this quote, for instance:

Hitler is my fucking idol

In most lines of work, this sort of thing would not fly. But when your a video game journo, anything goes. That’s not all for Little Hitler (oh, and did I mention gamers were responsible for his Hitler love?). Here’s more:

There doesn’t seem to be much equivocation here. It sounds pretty much like he hates Jews. But not only does he hate Jews, he also hates journalistic ethics. I wish I were making this up lol: 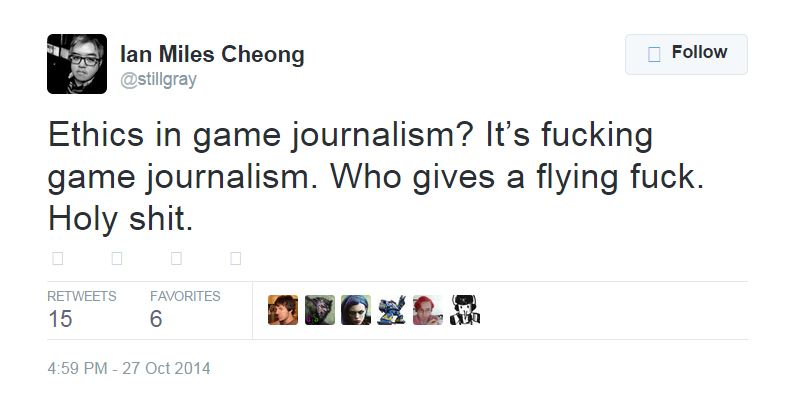 So, we have a disgraced Reddit mod, who used his position to enrich himself. He’s a lover of Hitler, which one could argue is bad enough in in and of itself. BUT, he goes on to try to blame that love on gamers. What kind of sick an twisted individual must you be to attempt such deflections? Just admit that you were a Hitler ass-licker, and move on. Then he has the nerve to say “fuck ethics?” No, fuck you Cheoung. But even degenerate shitheads like you deserve a Merry Christmas, or whatever weird ass holiday you celebrate. Hopefully you leanred you lesson after getting you head kicked in several times. But. we’ll see. It’s not like you have anything else to do.