I’ve been in GamerGate almost since the very beginning. During that time, I’ve gotten to know a lot of scumbag SJWs. Some of them are just as shitty as the usual cast of characters I write about here, but for whatever reason, they don’t make it onto the site. Usually, it’s because I decide they too small to even mention. The man I’m going to talk about this morning, Mike Sacco, fits that category. But after I witnessed his appalling behavior earlier this evening, I decided to go in anyway. Many of you on Twitter know this beta piece of shit quite well, but for those of you who don’t, let me give you the rundown:

First off, he calls himself a developer, but to my knowledge, he’s never developed anything. He did some work on a WoW card game, but got shitcanned when he rejected his boss’s directive that he quit spouting off SJW bullshit on Twitter, while representing himself as an employee of the company (even though he was only a contractor): 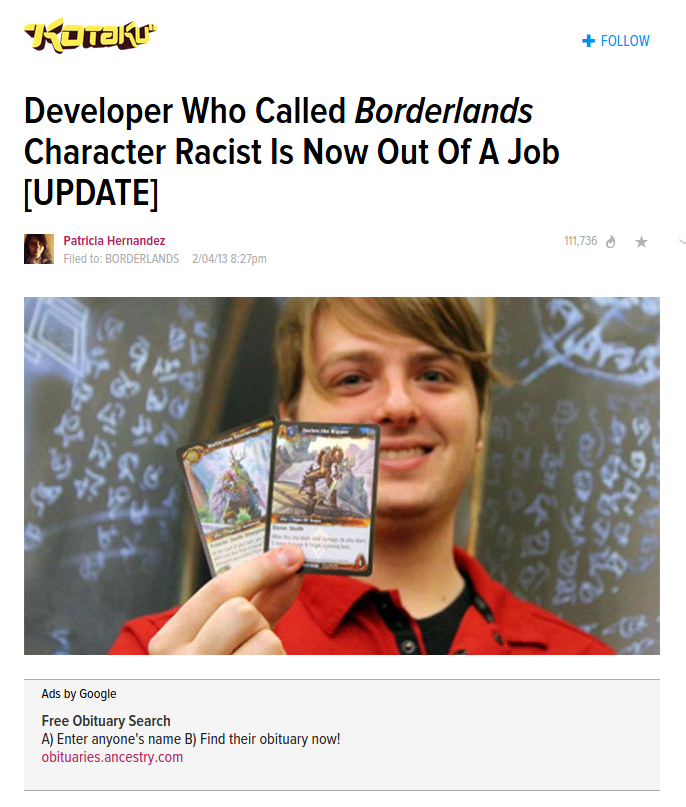 The guy looks like an even bigger douchebag now, if you can believe it. Anyway, so what did he do after this? Did he learn from his mistake, and get rid of his self-righteous behavior? Of course not. He decided to double down on dumbassery. The man is a radfem Kool Aid drinker through and through. The fucking Scientologists are jealous of the discipline these SJW cultists have.

But not only is he a simple-minded fool who revels in reciting rad fem pablum. He’s also a malicious piece of shit who enjoys disconnecting people from their friends because they refused to tow the SJW line. Hell, he even leads the charge. David Miscavige would be proud.

Read this account from @mahoumelonball (Ginny), a former friend of Mike and his “feminist Cinderella” fiance, Cait. Speaking of the couple, they appear to be made for each other: both of them are insufferable ideologues, who aren’t smart enough to debate beyond talking points.

“Back when I was kinda SJW myself, I offered to help Mike and Cait, because Mike obviously couldn’t get a fucking job. No one wanted to hire him. So Cait had to work more hours at Disneyland (She wasn’t a princess. I consoled her when she cried on my shoulder after being rejected. She was a cast member for the Storybook River ride). So I literally drove all the way from Los Angeles to Anaheim at least five times, back and forth, to help them go up to the Disney bank in LA and get a bank loan so they can pay for rent and get a new car. I didn’t ask for anything in return. Then they got their car, and the breaks were bad. But since Sacco has no spine, he wouldn’t fight with the car dealers about it. So guess who paid out of pocket their car repairs? Me.

Then on top of this, after Mike got a new job in San Fran, I drove down there and helped them pack and move. And took shit they didn’t want so they wouldn’t get in trouble leaving more shit behind. They couldn’t afford anything to move but their car. After that it was like pulling gator teeth trying to get Mike to pay me fucking $25 a month for the money he owed me on the car repairs. $25 bucks. That’s all it was and he would fucking slack and slack and slack.

Right when GamerGate started, Mike Sacco sent me a message over Facebook:

“What part of back off do you not understand?”

This was because I kept asking what was going on with Zoe Quinn. I just wanted answers. That was the day I got a huge wake up call. All the shit they said…all the shit I watched them do that bothered me…I couldn’t stand it anymore. I went from “Wow these girls look so skimpy in video games” to “WOW HER TITS LOOK GREAT I WISH I HAD TITS LIKE THIS.” I guess you can say I turned more sex positive. And I realized how conservative they’re acting. They slut shame. They make fun of nerdy weddings. They honey pot. And I was their friend. Fuck, I think on how I acted for the last few years and I wonder how I actually had friends as uptight as they were.

As far as Mike losing his job (the one in SF): I was told their company got a new CEO or something. Mike CLAIMS that he tried to tell the boss during a meeting they needed more diversity. And his boss said “If you want more diversity, go find another job.” I personally think it’s bullshit. Then mike didn’t call in to work while he was sick, and they allegedly fired him.

How does Mike conduct himself in public after all this? He gloats about her misery like a true shitbag would, of course. You would think that he’d be too ashamed to act like that, but you’re probably not an SJW sociopath like Mike Sacco and Cait Lowry are. 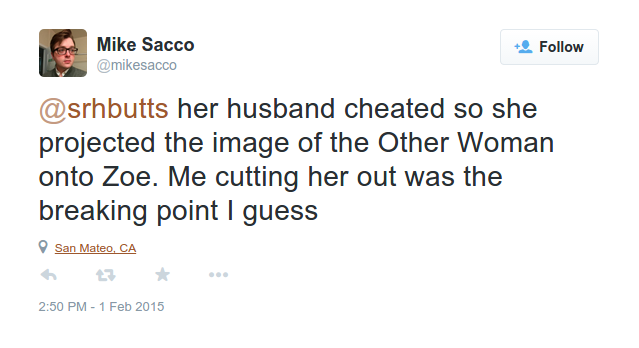 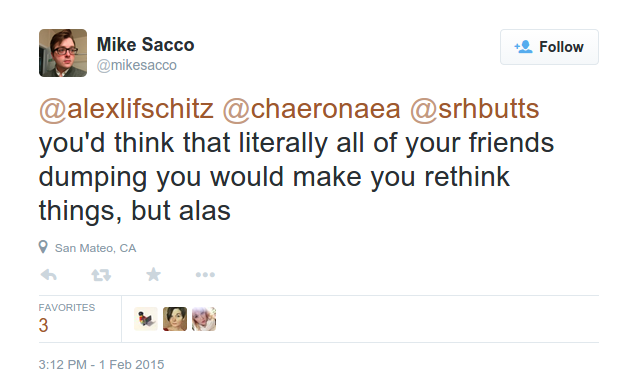 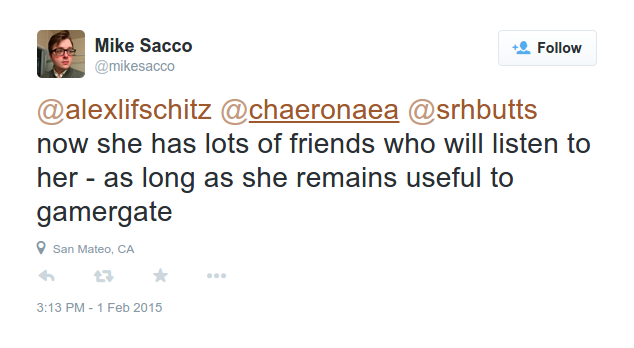 Her husband cheated? What the fuck does that have to do with anything? And what is the basis you have for saying she transferred all that over to Zoe Quinn? It sounds to me like that’s some nasty shit that you made up. Treating a former friend like this is one of the lowest things you can do in life. We all know people like Mike Sacco. They’re the lowest of the low, outside of murderers and child molesters. No loyalty, no respect, and no honor. And just in case you though his “feminist Cinderella” was any better: think again. 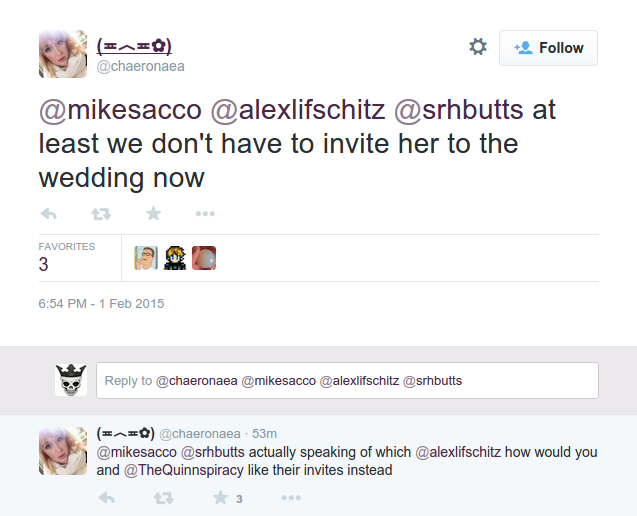 You four in the same room is something I don’t want to consider. Would there even be enough room for all those egos? Also, Cait has a little fame from earlier in GamerGate. As it turns out, she’s one of the racist pieces of shit who got blown the fuck out by NotYourShield members: 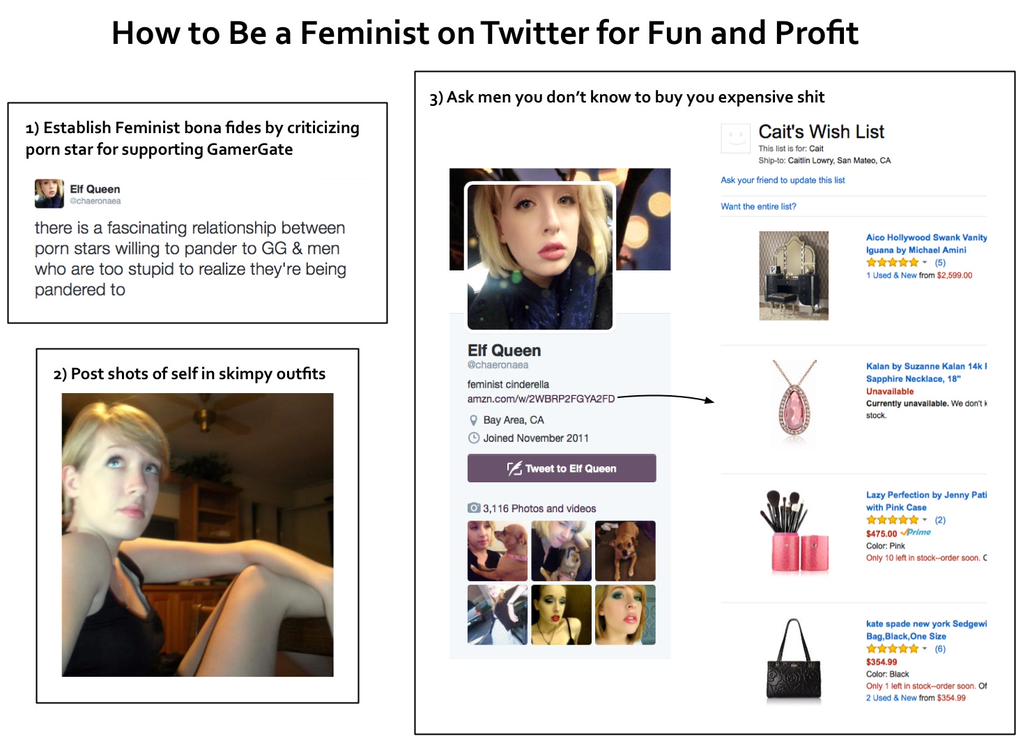 And even though they like doing Adventure Time cosplay, they make fun of others who they consider to be more nerdy:

In case you were wonder about their thought on gamers (although I think you get the fucking picture by now):

These two clearly have no shame. Instead of getting their lives in order and taking care of themselves, the e-beg and use people to get what they want. They’ve latched onto the “diversity” gravy train, and they’re hanging on for dear life. The only problem is, they’re even less talented than Anita, Zoe, Brianna, and Randi. Let that kick around in your head for a minute. I would advise anyone who’s close to this pair to watch their back. They have no compunction about turning on close friends, and seem to even enjoy it. These are two serpents who I have no doubt will turn on one another in the end. That’s the silver lining.

UPDATE: Oh, here’s a little screen from when Mike hypocritically tried to get JonTron fired. I forgot about it when compiling this piece, but I wanted to put it down here anyway. It further illustrates what a phony this guy is.