Good morning everyone! I missed the evening shift yet again last night, but you can blame that on Geralt and sleep. But I plan on filling up the pages today, because I have a lot to say. Let’s start off with a news medley though, rather than one specific topic. In fact, let’s reach way back to the beginning of GamerGate for a name that many of you new people might not be familiar with. The old heads will recognize it. I’m speaking of course about Jenn Frank, the woman who framed us up as having driven her into retirement by tweeting critiques at her. She’s back…just as I predicted a few days ago.

I was actually joking around, but I said maybe Jenn should come out of retirement in honor of GamerGate’s upcoming one-year anniversary. About two hours ago, I was alerted to some news on Twitter. She actually is coming out of “retirement.” 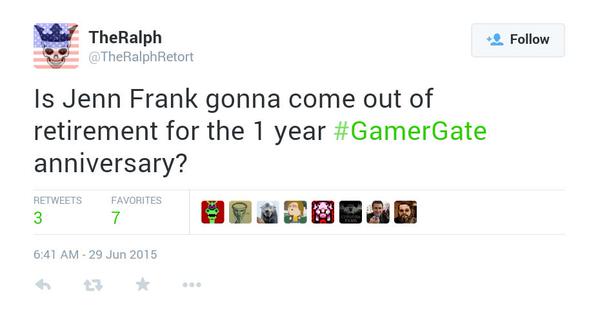 There’s only one problem. The reason I used the quotation marks around retirement, is because the woman never actually retired! She’s been writing this whole time, even about games: 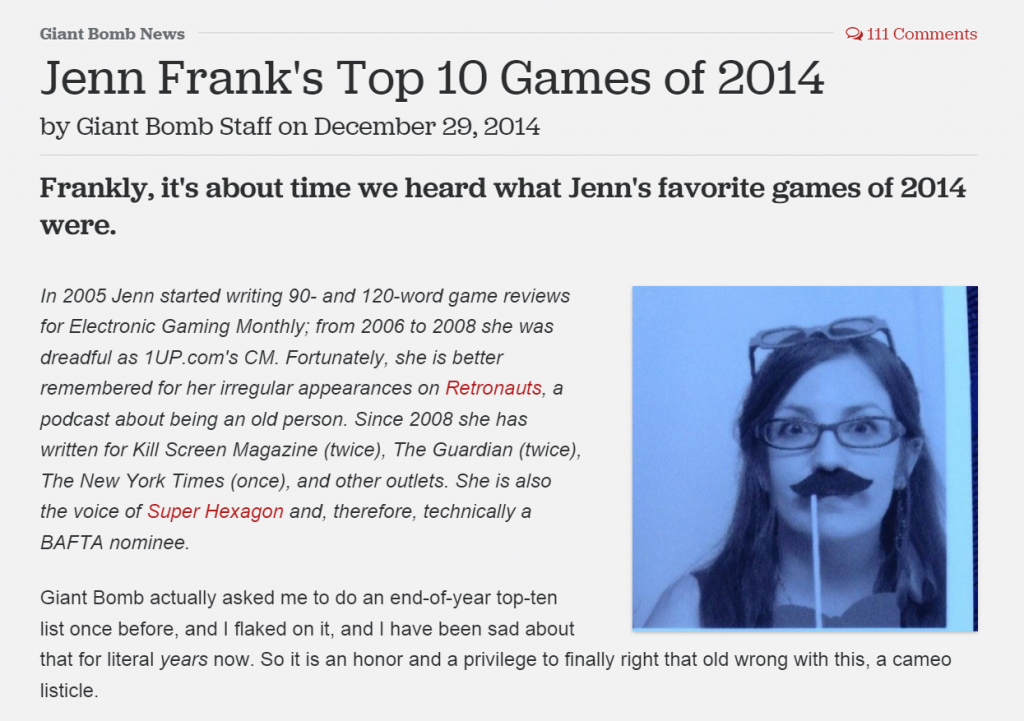 Some retirement. Anyway, I’ll still take credit for the prediction. Welcome back, Jenn! I hope you don’t “quit” again when you inevitably get called on the carpet for your bullshit defenses of odious people.

What else was going on last night? Oh, it looks like Anita Sarkeesian said some offensive shit about the Fallout Shelter mobile game that I can’t play yet because I don’t fuck with Apple (gimme that Android version, if it ever comes out): 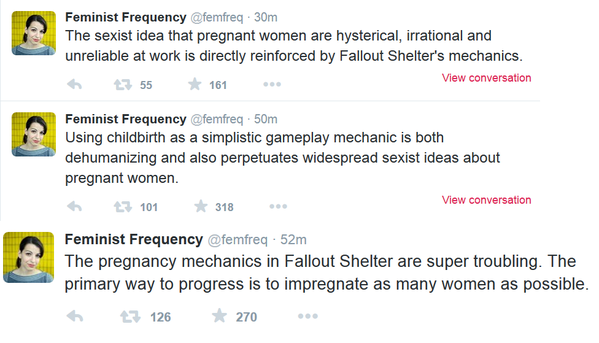 Who would have guessed that Anita would have trouble with pregnancy! They’re trying to repopulate the earth, you dumbass. The pregnant women running away are trying to protect their child, from what I understand. What’s wrong with that mechanic? It’s almost like she goes out and looks for any little controversy she can latch onto in order to stay relevant. Of course there’s a good chance McIntosh sent that out, let’s face it. But either way, it’s a dumbass position to take.

Quick bit on the Dukes of Hazzard rerun cancellation: it’s bullshit. I know they have the Confederate Flag on the show, but I used to watch it a lot as a kid. I don’t recall seeing any racism whatsoever on the program. In fact, it was pretty funny. So I don’t understand why TV Land would bow to this kind of pressure. Are we gonna take every show that has any kind of offensive logo or flag off the air now? It’s getting to be fucking ridiculous. The PC Police are on a witch hunt to take out anything thing they can think of.

So "16 and Pregnant" is fine on TV, but family friendly "Dukes of Hazzard" is now considered offensive? Get a life! pic.twitter.com/uMIdTiARHh

This one wasn’t on the agenda, but I tweeted it out yesterday afternoon. Take a look at a Randi Harper flashback:

The last item on the rundown? Magic Mike XXL. I’ve seen a ton of articles about how this is a feminist’s dream movie or some shit. I don’t know if that’s the case, and I hadn’t planned on catching it regardless. But you can see where the rad fems are headed. They want to take every bit of mainstream media that they can and twist into supporting their agenda. It doesn’t matter whether or not it really does. What matters to them is the perception. Expect to see even more of this in the future. And if they don’t think a film has enough of their agenda in it, they attack it, like we saw with Jurassic World. It didn’t exactly hurt the film, though, did it?

I’ll be back in an hour or so with a more traditional one-topic column.