NeoGAF Breaks Out in Another Pedo Pity Party, Threatens to Ban Abuse Survivor

NeoGAF sucks. If you’ve been reading my site for any decent length of time, you already know that. But not only do they suck, they’re also dangerous. You know that I go balls to the wall around here, and that I’m not exactly known for pulling punches…even when it would be easier to do so. Instead, I always throw the punch no one else is willing to take. Like here. I didn’t pioneer the anti-GAF beat, but I was one of the first to compile their transgressions in the press. For example, here I am writing about stolen user content last September (2014):

Earlier this evening, I tweeted a screencap of NeoGaf userNanashrew, who had high hopes that Breitbart.com journalist Milo Yiannopoulos would be jailed for his efforts in uncovering corruption among the video game press. On one hand, it was funny, like Milo himself told me on Twitter. But, on the other, it sends chills down the spine. It confirms what I, and many others on our side of this battle have said. These people want to censor dissenting voices at all costs, and the evidence proves it. It’s not just Leigh Alexander. This is how they all think.

After I tweeted it out, I was sent some very sensitive information by a source with intimate knowledge of NeoGaf operations. If true, this goes directly to the character of Tyler Malka and Kotaku. We can say one thing for certain: they stole user content and let Kotaku use it without paying the author of it anything. Whether or not Tyler Malka was paid, he and Kotaku still screwed this user.

I just received a copy of the thread where Tyler Malka was alleged to have shared nude photos of a rival’s love interest. In the thread, he denies being the one to leak the photos. But his buddies on the board crack jokes about the woman’s breasts, and her looks. And at least one user doesn’t believe Malka, and accuses him of lying.

Or the time they let pedos run wild on a board filled with kids of all ages?:

How can Tyler Malka and his hand-picked admins explain allowing a thread on NeoGAF that sympathizes with pedophiles? If they can explain it, perhaps they would also like to explain exchanging private messages with pedophiles in order to get their perspective on things, then posting that PM for the board to see? All this is happening on message board populated with kids ages 13-17, by the way. And if I know kids, there are surely many more younger than that, unofficially.

This is only the tip of the iceberg, people. There’s way more on the mopes over at GAF in the archives, but that’s not why I came to you today. Instead, I wanted to talk to you about the latest controversy surrounding that shithole of a site. Now, not only are they letting pedos have free reign, they’ve also taken to belittling real victims of their heinous crimes. Why, you ask? Let’s go to the tale of the tape:

Above, you saw a longtime NeoGAf poster complaining about someone rhetorically licking a pedo’s asshole. What did they get for their troubles? Well, they were almost kicked off the site. I mean I’m laughing right now, cause the shit is so absurd. But it’s not funny at all. It’s fucking tragic:

“Nice account you have there. I’d sure hate to see something happen to it.”

If you look back at the post I linked above, you’ll see that his is the same guy who started the pedo pity party in the first place. Here’s the screen from that post: 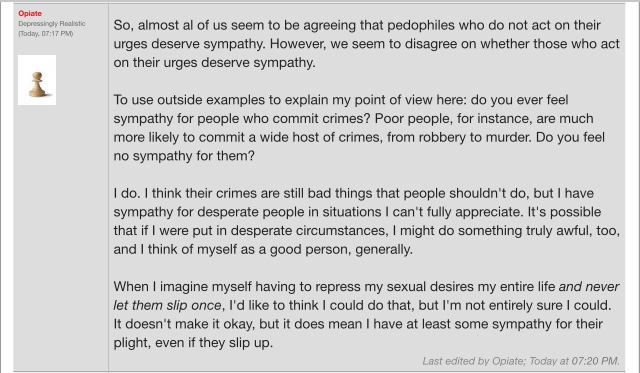 Does it get any more obvious? This guy is almost certainly a closet pedophile himself. Can I say that for sure? No, but it’s looks pretty damn clear. What other explanation could there possibly be? I guess if you have any, drop them down in the #BasedCommentSection. I’m gonna go work on another couple posts and get ready for the stream.