The Republican National Convention begins on July 18th. Of course we will be monitoring events here on the site and on the Rundown. As it turns out, we now have a Ted Cruz speech to look forward to. OK, not really. Cruz is despicable, as I’ve said many times. But, now it looks like he’s come around and will possibly officially back Trump at the convention… 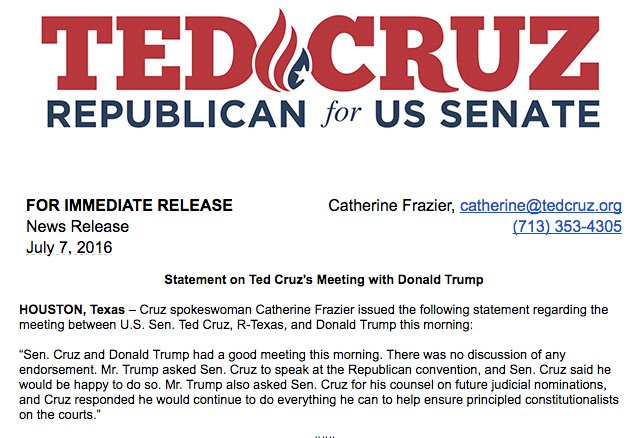 Ted cruz announcing that he WILL be speaking at the convention#NeverTrump on suicide watch pic.twitter.com/vuPGCiRLtC

Now, it’s not 100% guaranteed that Cruz will back The Donald in his speech. But just by making an appearance he is helping to put the nail in the #NeverTrump coffin. Which, let’s face it, is a beautiful thing. I’m eagerly counting down the days until Trump offically accepts the nomination and I can watch these loony fucks eat the shit sandwich they so richly deserve.

By the way, it looks like they’re gearing up early!!

Sorry senator, @tedcruz, but you're a sell out. Plain and simple. #NeverTrump

So Cruz will be onstage shilling for Trump, however obliquely, and Rubio will be out of town. Duly noted.

I remain convinced that Walker and Cruz are only speaking at convention so they can be there in case delegates chuck Trump, nom them.

In an environment with so many voices calling for more, Ted Cruz just gave less. May the delegates have more conviction.

This is terrible optics. It will be played as a de facto endorsement for 15 minutes speaking at a poop show. Good luck countering that.

The only way I’ll accept @tedcruz endorsing @realDonaldTrump is if it turns out Trump poisoned Ted and was holding the only known antidote.

@Tedcruz is a sellout if he speaks at the crowning of this Racist Thug. Where are your Principles?#NeverTrump #Cruz https://t.co/VLQe7Bu6wh

I have a newsflash for that last clown. All politicians are politically motivated. Always. The sooner idiots learn that the sooner they won’t be surprised when shit like this goes down. Since most of them won’t learn it though, we can all just sit here and laugh at their naivete.