I read an interesting column the other day on the Elle Magazine site. It dealt with the latest craze around consent laws and how that’s changing definitions for the worse. Specifically, it talks about the new change California, where they passed one of these new SJW-backed behavior codes. The author of the piece, Cristina Nehring, speculates that one of her past encounters would now be considered rape under this deficient mindset. I wonder how many other women could offer a similar testimony.

Search for "Cristina Nehring" on Twitter. Hilarious reax to her consent piece. Lots of wailing, gnashing of teeth, & calls to burn the witch

The night passed with excruciating slowness, punctuated only by an occasional attempt on my part to add inches to my black dress by tugging on its hem. And then, just before the sun rose, the man behind me began to stroke strands of hair out of my face. He stroked my temples, shoulder, shin, my bare side under my dress. His caresses explored, were eluded, slowed, circled, soothed, revived, roamed. Dawn broke slowly, and my defenses with it. Somehow, in these moments, I became his lover.

I remained his lover—and we a fast couple—for the next six years. They were years of passionate devotion, discovery, complicity; years of nearly accepted marriage proposals, intercontinental moves, and high romance.

But then again, this was the 1990s. And this was Paris. Were it today and in the U.S., our first time together could readily be considered “rape.”

Indeed it could be. We’ve seen case after case of women trying to criminalize normal sexual behavior, or turn choices they made around on unsuspecting men. Regret is not rape. If you decided to sleep with a guy so he wouldn’t throw you out on your ass, you weren’t raped. The article talks about a scenario just like that one:

[A] 20-year-old woman named Sophia Katz who made a trip to New York to network for her prospective writing career, after accepting a twentysomething editor’s invitation to stay at his place. “Stan” had e-mailed her that she was “welcome to sleep in my bed—ha ha.”

Sophia accepted his invitation, appeared in the editor’s Brooklyn pad soon afterward, and spent many days accompanying him to readings and nights sleeping next to him in his bed. On the second night, “we were sitting on his bed and he began kissing me.… I had no interest in making out with him or having sex with him but had a feeling that it would ‘turn into an ordeal’ if I rejected him…. I knew I had nowhere else to stay, and if I upset him, then I might be forced to leave.” When she hears his roommates enter, she speaks up: “Stan, please, can we just do this later? Your walls are really thin.”

He reassures her that his roomies don’t mind.

“There was no way for me to win,” she declares, and gives herself over to the advances of her host. The scenario repeated itself again and again over the several days she remained in his flat. Back home, her networking trip over, she wrote about the incident.

Similarities between stories like Sophia’s and my own are easy to spot: new girl in town, powerful host, some misunderstanding of host’s intentions, no unambiguous verbal consent to sex. There are also differences. Sophia seems to have made some hardheaded calculations: She did not want her host’s sexual advances, but she preferred them to maybe having to leave or arrange different accommodations.

The criminal law takes account of implied threat, where a woman fears harm based on a man’s size, menacing demeanor, or factors such as blocked exits, but by Sophia’s telling none of that pertained in her case. As difficult as it can be to judge the suffering of others, it seems clear that she was not overpowered by Stan so much as she tacitly accepted a sex-for-rent deal with him. Worrying that erotic activity will be overheard by acquaintances a few feet away—rather than, say, signaling to them for help—suggests assent. As does, perhaps, continuing to have sex with him after he brushed off her suggestion that he use a condom. To claim that Sophia presented to Stan “every iteration of ‘no’ that a person could muster,” as a Salon writer and many others have done—is simply inaccurate.

The guy was driven out of public life. He was literally ruined because of this woman’s bogus narrative. His fall was even quicker because of the circles he hung out in, which were already pretty much SJW-ized. But this could happen to any man unfortunate enough to bed a spiteful  person, like Ms. Katz. Keep in mind: this is far from the most blatant case of fake rape out there. I’ve seen even weaker. 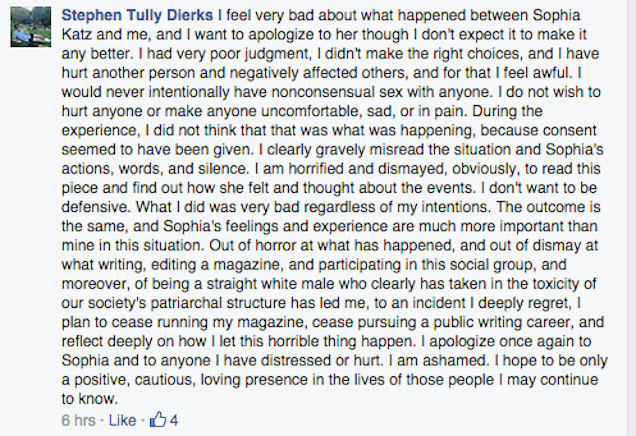 Ms. Nehring has been raped herself, and she details it in the post. Real rape isn’t something she takes lightly, nor should it be:

We must protect and defend the women and girls in our midst who run the risk of sexual assault. But that is not best accomplished when we cry wolf at every sheep we spot. To do so turns our allies into skeptics, supporters into passive bystanders.

I couldn’t have said it better myself. The SJWs are hurting women with their poisonous agenda. Not only that, they want to turn sex into something about as exciting as going to the DMV. It’s time to stand up and say no more. Columns like this will go a long way. I can sit here and tell you the same things all day long, but it’s more powerful coming from someone like Cristina Nehring, writing in Elle Magazine. I thank her for standing up, and encourage everyone to help spread this important testimonial.