Earlier this evening, my respect for the New York Times died. I know some already hated it, but I, personally, still had some respect for the supposed “Newspaper of Record.” After reading their one-sided shit piece a few moments ago, I can no longer support such an institution. Only once did they quote a GamerGate supporter, and it was Adam Baldwin defending us against false charges of abuse. How is that being unbiased? It’s a sad state of affairs when HuffPost Live has more journalistic integrity than the fucking Times. I’m almost embarrassed for them.

Well, I would be, if I wasn’t so enraged with the reporting. You see, The Times decided to perpetuate the lie that GamerGate was behind the recent threats against Anita Sarkeesian. The shameful reporter, Nick Wingfield, goes all out in trying to smear us. Big Media is on the case now, and they really know how to run a hatchet-job.

The threats against Ms. Sarkeesian are the most noxious example of a weekslong campaign to discredit or intimidate outspoken critics of the male-dominated gaming industry and its culture.

They spend precious paragraph space describing a threat that the school she was due to speak at, said never existed. Here’s a piece of their statement on the matter:

Following a disturbing email received late Monday evening, Utah State University police and administrators have been working throughout the day to assess any level of risk to students or to a speaker scheduled to visit. USU police, in conjunction with several teams of state and federal law enforcement experts, determined that there was no threat to students, staff or the speaker, so no alert was issued.

The safety of our students and visitors is always the university’s first priority. At no time was there any imminent threat.

Basically, they’re saying Anita is a drama queen who’s full of shit. It’s hard to argue with them. She takes some troll email, blows it up into something it isn’t, and gets the hapless NY Times to play along. They even gave her one of those feature pics, like the New Yorker gave Zoe Quinn. At least she isn’t pouting in hers. 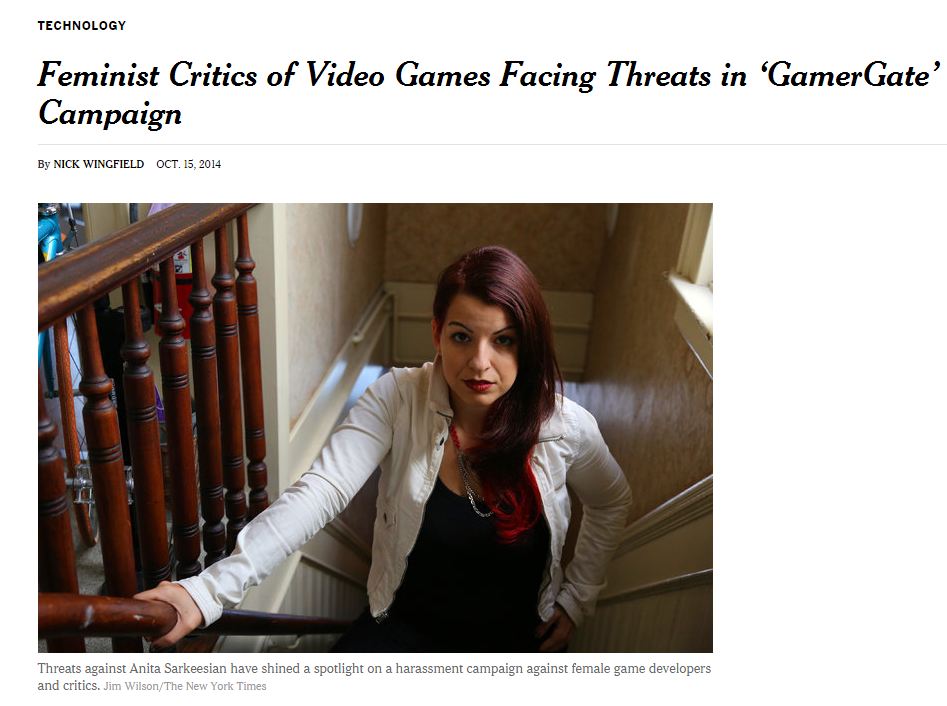 The rest of the article is spent recycling old lies from the SJW propaganda factory. The only other noteworthy point, is the appearance of of IGDA Executive Director, Kate Edwards. Not only is the biased Edwards quoted extensively here, she also appears in a similar bogus story in the Washington Post. If I didn’t know any better, I would say that paid PR flacks arranged these two hits to drop simultaneously Perhaps right around the time they’re starting the #StopGamerGate2014 tag? They’ve done it before with the “gamers are dead” article flood. I’m smelling yet another rat.

There’s no need to get discouraged, though. The media doesn’t matter to us. We’re talking to other gamers. They don’t care about these mainstream outlets, for the most part. Yea, it’s nice when we get some good PR, like yesterday. But, we can’t get discouraged when our enemies use their media apparatus to punish us. It hasn’t worked so far. It’s not going to work in the future, either. It’s only going to swell our ranks even further.

UPDATE: Oh yea, there was one other thing. They asked the big boy publishers to comment on GamerGate, and they refused. They knew better than to piss off the people who actually spend money with them.