Ok, guys. I slept a little late again, but mostly, I’ve been on Twitter collecting news about the day’s events. We have follow-ups on Randi’s hate mob, Milo is wondering what he should spent the $10,000 Anita Sarkeesian turned down to debate him, and The Guardian doesn’t seem to like paying their writers. Let’s just jump right in, starting with more news on Big Randi and her hate mob attack on Anne Rice.

First off, Randi didn’t always hate Anne Rice. In fact, she used to be a huge fan. I guess getting called out as a huge bully by one of your favorite authors would change your tune a little bit: 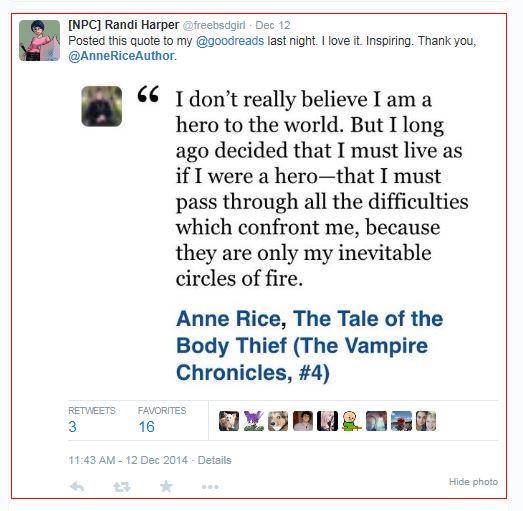 Today, Ms. Rice is a “cyberterrorist,” according to Radical Randi and her clique of haters:

Now Anne Rice is a cyberterrorist, according to Randi and her shameless hate mob.#GamerGate pic.twitter.com/VOeXAarRLx

Then Arthur Chu showed up. Yea, it’s getting crazy as fuck. The little bastard claims to have his wife running his Twitter now, but I’m not buying it. He just knows he has to wait at least a month before coming back fully, or else he’ll be called a phony. But that didn’t stop him from showing up in the Amazon review section for the book Randi was trashing. He admits to having not read the book, but still goes on to spew his hate. It’s hilarious:

Also, Ann Rice has been on this case for awhile. Protecting writers against bully reviews is something she’s been talking about for awhile (thanks, @Candy_Jam_). Keep in mind, there’s a difference between a legitimate bad review, and one that’s just hateful. For one, a legitimate reviewer actually reads the fucking book…something which neither Harper, nor Chu actually did.

Short news item on The Guardian, which has consistently spewed bile towards GamerGate since way back in September:

… Of course, they do pay when you remind them, & apologise, but it's an afterthought. What? We're THE GUARDIAN, man. You want money too?

Master Milo is back with an article hitting out at Anita for refusing his $10,000 offer to debate him (to a charity of her choice). I’m not surprised at all that she is a massive coward. She’s never been able to defend her brain dead ideas. Here’s more from Mr. Yiannopoulos:

In April, I challenged Feminist Frequency host Anita Sarkeesian to debate me some time around the E3 conference in Los Angeles this month. I offered a $10,000 donation to the charity of her choice. Well, E3 is looming and I’ve heard nothing. So what, dear reader, am I to do with all this cash? Obviously, my first thought was to donate to the Republican National Committee, or the NRA, or a men’s rights charity. Or perhaps AIPAC, in honour of her producer Jonathan McIntosh’s virulent hatred of Israel. But, as amusing as those options would be, I don’t think any of them truly captures the mischievous democratic spirit of #GamerGate. So I’m instead presenting six options for interested readers to vote on. What should I spend muh dollas on? 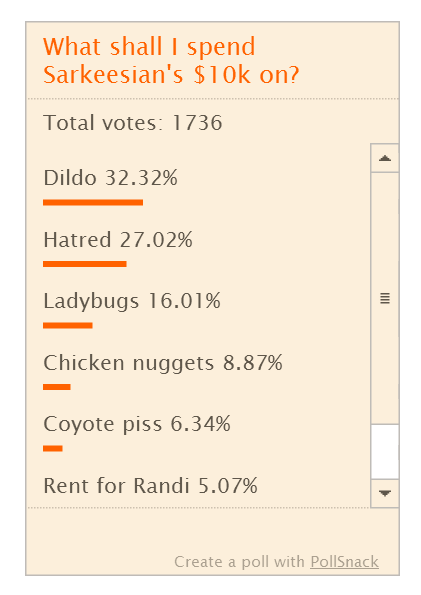 And finally, lemme show you what happens when you get SJWs to do free advertising for your game for months on end: 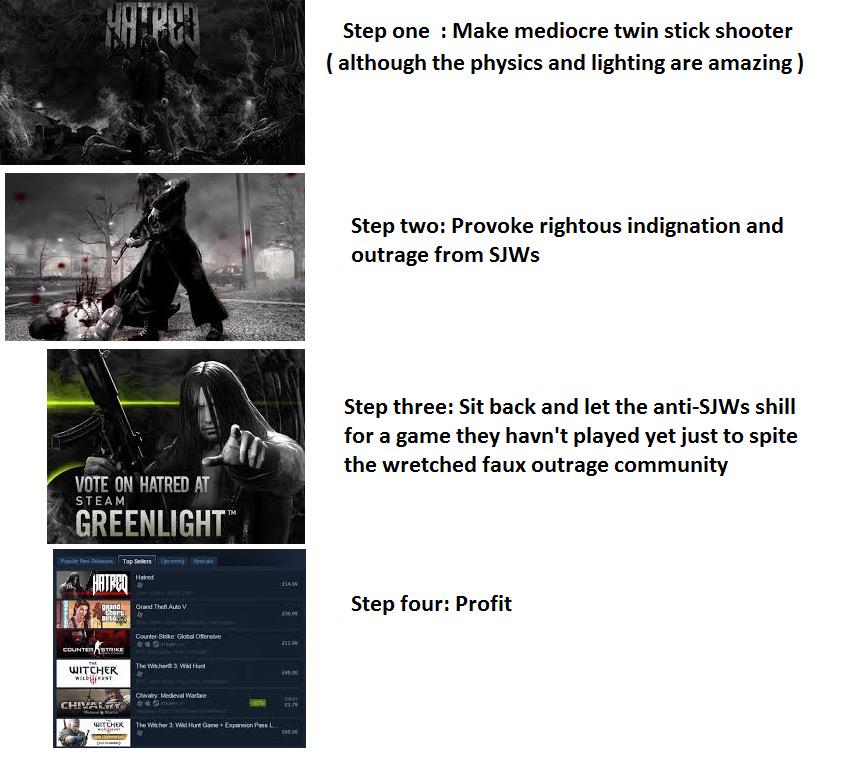 I’ll be back in a bit with more stories. This one would have been done sooner, but the bums at Spotify made a buggy app. So, I’ve been dealing with that all night. No one likely cares, so I’ll get back to work lol.