If you’ll recall, just the other day, I wrote a column about Tariq Moosa quitting Twitter over some harsh criticism he’d received. Keep in mind, he only got those critiques after he demonstrated that he knows next to nothing about the medium he ostensibly covers, gaming. But the SJW media turned this into a tale of GamerGate harassment, and ran with it from there. The usual suspects came out with “respect minority voices” think pieces, and shit like that. Sorry, but I don’t respect idiocy, no matter the color.

Guess what, though? This phony is already back on Twitter, a mere four days later. Even Arthur Chu has more dignity than this. He pretty much just RT’s stuff now, although I’m sure he will be back fully soon enough. Take a look at Tauriq’s feed, and remember what a big deal he made about leaving Twitter forever: 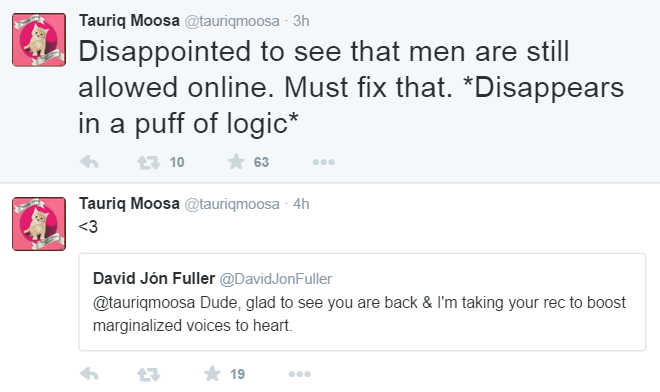 What an epic ordeal you had to go through, Tauriq! How do you manage to be so brave in the face of critical tweets? It’s not like myself, as well as many others, have faced all kinds of shit for months on end. No, you are the special minority snowflake that must be protected and sucked-up to at all costs, even though you’re a blithering idiot. That’s the SJW Mentality in a nutshell, ladies and gentlemen.

I’ll be back with another couple hits shortly. I just wanted to do an update on this crybaby real quick before I moved onto more pressing matters.