How many times have I ripped Zoe Quinn here on the site? I can’t even count. Well, I could count, but I’m not going to. Suffice it to say, it’s happened quite a few times. If you’ll recall, I made fun of her Crash Override Network initiative just the other day:

In case you didn’t see that claim from Zoe, here’s an excerpt from the recent puff piece on her and Cuckmaster Jr:

In the first six months of running Crash Override with Lifschitz, Quinn says the volunteer network has assisted more than 1,000 people who were targeted for online stalking and abuse. Some of the cases required minor help; others extensive support to secure online accounts and deal with the police.

One of my Twitter followers put it best, I think:

As you know, I can sit here and trash her all day and all night. But some people just aren’t going to listen to me, even when I come with the cold, hard, facts. Maybe if there was someone on the other side calling these phonies out for the pieces of dogshit they really are? Oh, what’s that? I’ve being told there is someone. Don’t get me wrong, this guy is a huge wanker who has been alleged to have been involved with stolen valor. Still, it’s always good when their own allies call them out for being frauds: 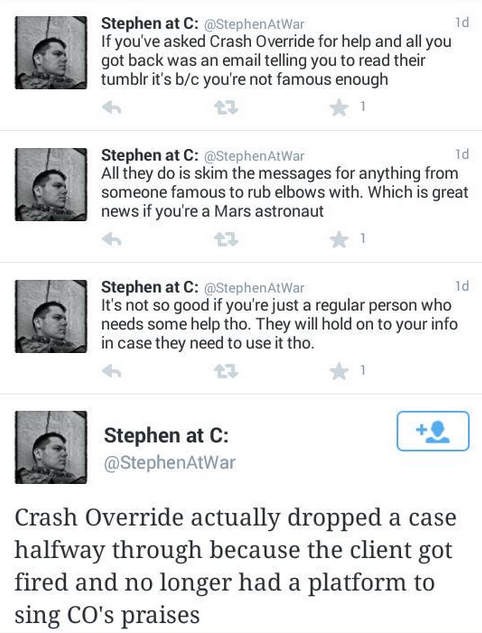 You mean to tell me that Zoe and Alex aren’t interested in helping the common man at all, and that they just got into this racket so that they could raise their media profiles? Huh, that’s funny. It sounds pretty close to what I’ve been saying about these charlatans for months. Again, SJWs have a tendency to block me out, like I said above. Hopefully they’ll at least examine this man’s claims, though. I don’t see why he would have any reason to lie. He’s personally criticized me and GamerGate in general on numerous occasions. There’s no reason for him to go at Zoe & the Cuck unless he had a valid complaint. I’ll let the reader be the judge, though.

I will be back soon with some details on tomorrow’s SPJ AirPlay event, as well as another post or two before bed.

UPDATE: I forgot to add this in. Good job, Mike…