Well, its Oscars season again, so the Twitterati and Tumbrinas are out in force….. again. It’s a guaranteed cert – like a lone thoroughbred in a field full of donkeys – that every single year since Twatter and the unsocial media side of the interwebs took off, that the professionally outraged and perpetually butthurt have a good old whine-in about how the Oscars are so sexist / racist / homophobic / transphobic blah blah blah. And there is no more reliable a whiner than good old race hustlin’ Spike Lee.

In a hissy fit of butthurt that the NWA biopic Straight Outta Compton hasn’t made the nomination list, Spike Lee has borrowed his good friend Rev. Dr. Mr. Al Sharpton’s well worn Race Card ™ and has said he wont attend the “lily white” awards show…and of course relayed to the world via Instagram and Twitter. Now, Spike is lobbying his fellow actors of colour to follow him in blacklisting the event.

How about Halle Berry, who won best actress back in 2001?

But Spike need fear not…. It wont just be him and his best buds like Rev. Al Sharpton doing the race hustle two step at the angry end of the red carpet. Jada Pinkett Smith has said that she will be standing there with them as well. “Begging for acknowledgement, or even asking, diminishes dignity and diminishes power. And we are a dignified people and we are powerful” she said. She is also more than a bit butthurt her hubby Will Smith didn’t make the grade for his flick Concussion, which she thinks is totes better than The Revenant or The Martian. She thinks her jug-eared hubby dear is much better at acting than say Leo De Caprio or Michael Fassbender….both of whom have acted in piss easy acting stuff like Shakespeare flicks. But what is the Bard when compared to Wild Wild West eh?

“Forty white actors in two years and no flava at all,” posted Lee. “We can’t act?!” Well….apparently not well enough in 2015 to make the cut, sparky.

But all is not lost, for Oscars supremo Cheryl Boone Isaacs is taking action to “alter the make-up” of the Academy membership to make it more diverse. Y’know, because…reasons. Her being both black and a woman give no indication at all that race isn’t a feature. Nor the fact that black actors and actresses, when their films or roles deserve it, make the lists year on year. No…a dry year or two for black acting means the Academy is inherently racist and Things Must Change. More vag and more melanin is required. “In the coming days and weeks we will conduct a review of our membership recruitment in order to bring about much-needed diversity in our 2016 class and beyond.”

That’s funny. You know, some people would call that cooking the books. Gerrymandering even. I prefer simple English…so Fucking Cheating seems apt.

Anyway, seems Spike et al have been taking a lead from old Father Ted Crilly and Father Dougal McGuire about how to organise a film protest.

And in the same spirit here is my response 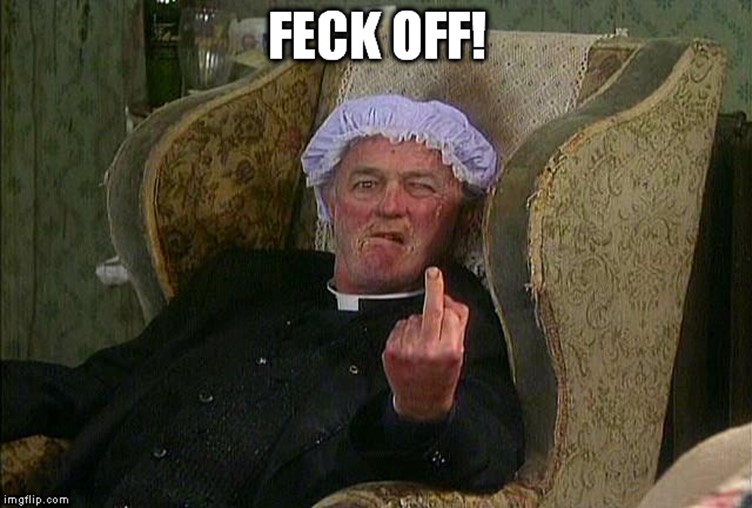 Back with more Oscars related insanity in a bit…. Seems our dear chums the feminazi twats are all in a tizz because while Mad Max: Fury Road is up for a few awards, Charlize Theron isn’t being nominated for her role as Furiosa. Muh sexism!