I had a lovely Christmastime dinner with my family last night, but now it’s back to work. I have several topics I want to address today, beginning with some interesting data. The poll I’m about to talk about was shown to me a couple days ago, and it contains a few numbers that are somewhat surprising. Well, they’re surprising at first glance. When you sit and think about it, maybe it shouldn’t be so shocking.

Here’s the link to the full poll, followed by some screenshots showing what I was just telling you about… 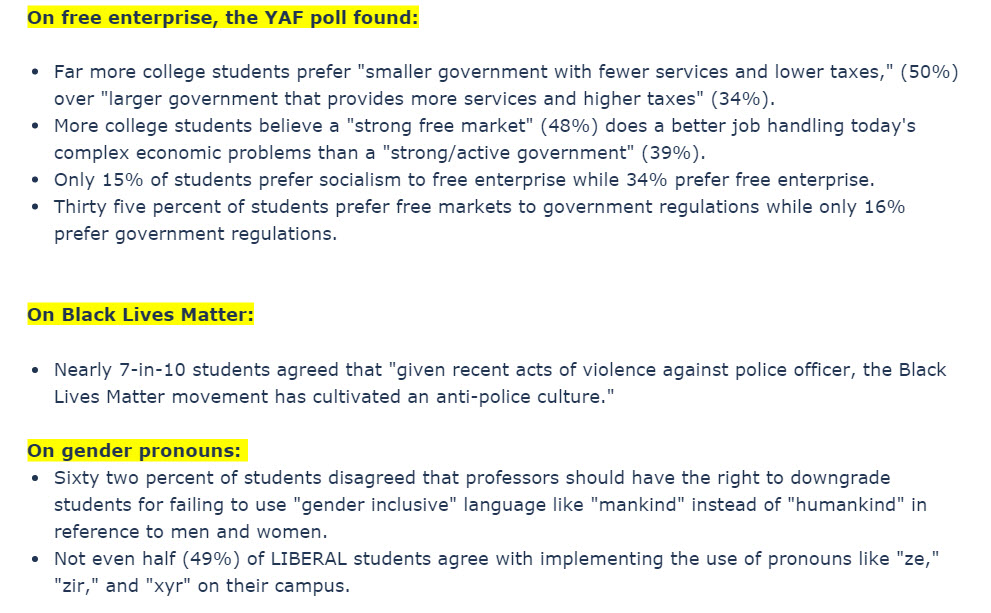 Now, I’m gonna leave out the smaller government part of the poll (although it’s interesting as well), because I’m here to talk about campus culture. Look at how unpopular the #BlackLivesMatter movement is. You certainly wouldn’t know that by the media coverage. The way they portray things, you would think most college students were walking around in all-black clothing holding a copy of The Autobiography of Malcolm X. These numbers tell a different story.

But the real question is, why does it appear that the campus crazies have the upper hand in the first place? Yes, the media has a lot to do with that, as I just mentioned. But they aren’t totally at fault. You know how it goes: the squeaky wheel gets the grease. That certainly applies here. Most college students are too busy trying to get laid, get fucked up, or get into a well-paying field (and some are trying to do all three). They don’t care about racial politics or whatever fad movement is sweeping the nation at any given moment.

Proper pronouns? They couldn’t give a fuck less. They’re more concerned about weed prices and campus police fucking up their parties. DeRay Mckesson and the frauds of Black Lives Matter don’t enter the equation for most of these kids. Now, if only they would start standing up and calling out some of their idiot compatriots, maybe we could rid ourselves of their odious presence once and for all. I wouldn’t count on that happening, for the reasons outlined above. But a guy can hope, can’t he?