I’m back in place for this evening festivities. Soon as I woke up from my slumber, I saw a new hashtag, #GamesSoWhite. At first, I thought this was a joke started by some fellow GamerGate sympathizers. As it turns out, it wasn’t. Instead, it was inspired by a column from one of the most radical SJWs I’ve seen over the last nine months: Tauriq Moosa. Here’s a small sampling of his bullshit: 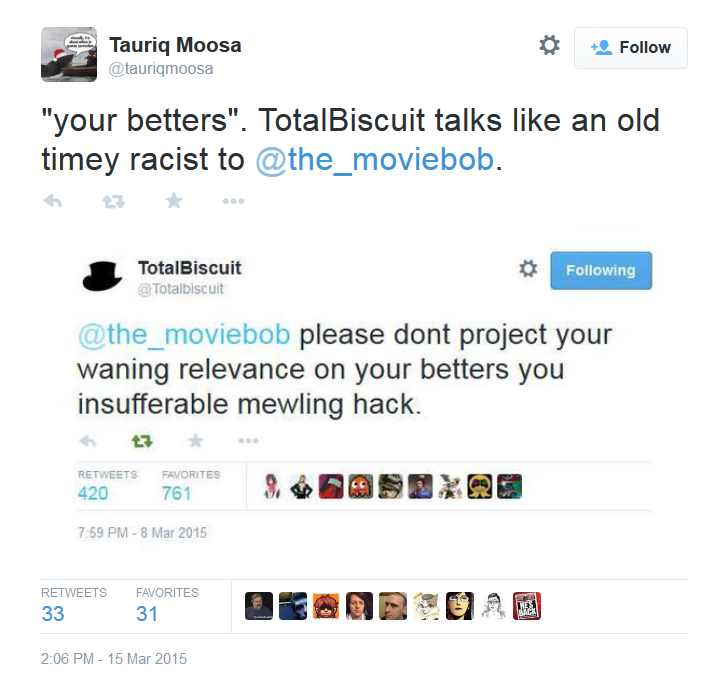 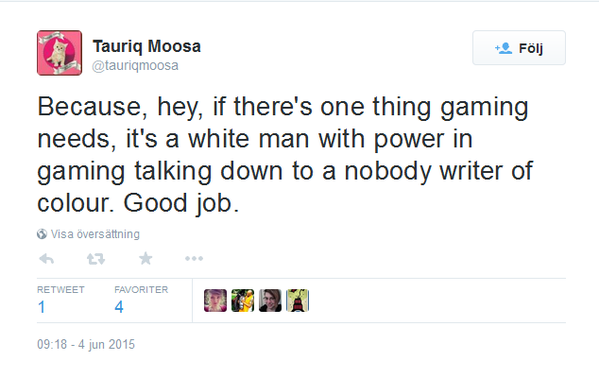 (That’s in response to Erik Kain’s reaction piece. Apparently, even writing about his garbage is some sort of racist act)

This is just what I could find with a quick search. Hopefully you all can provide some more juicy quotes from this race-hustling, pond scum, piece of shit. I could, but it would take a little while, and I want to get this out (side note: the new Twitter search sucks). So what happened with this tag, you ask? Well, we took it over with logic, reason, and comedy.

Now I realize why SJWs wail and cry over GTA games so much.

#GamesSoWhite should be renamed "Outrage So Manufactured" #GamerGate

#GamesSoWhite b/c japanese games with japanese characters are constantly labelled as "white".

So @tauriqmoosa is it my duty as a white man to produce games not about my culture, but about yours? Why dont you make them yourself?

Isn't such thinking of yours @tauriqmoosa little bit racist?

Why dont you ask (or accuse as you seem to prefer) Chinese developers to produce diverse games? @tauriqmoosa

Based Vavra with the blowout there at the end. The Mary Sue is doing their usual propaganda spin, as is Leigh Alexander herself over at Offworld. But it’s clear who won the day. These people are so weak. They refuse to make their own projects, and instead work to tear down whatever is popular at the moment (The Witcher 3, in this instance), so that they can preach their ideology to gamers. We’re sick of it. Keep your gender and racial politics out of games. Go to Jezebel or some other rad fem hub and talk that shit, but we don’t want to hear it. You’re going to continue to lose, especially with these tactics. As we’ve seen, developers are sick of it as well. You’re pretty much starting to piss off everyone. That is the good thing to take from all this. The only ones supporting their line is the hugbox brigade.

It's like Leigh saying gamers are over. No bitch, your fucking career is over. Money talks, bullshit walks. #GamerGate

P.S. Polygon is utter shit, and may have overtaken Kotaku as of late for the title of World’s Worst Gaming Site. All this is fresh off the heels of their much derided Rock Band 4 article the other day. Here’s a short refresher, in case you missed that gem:

In his preview of Harmonix’s game, Campbell stated, “I’m standing at a safe distance [from the game]… I don’t care about rock music. I dislike crowds and I dislike loud noises,” before saying that “sometimes in this job you gotta cover games you don’t really give a stuff about.” Some took issue with the writer’s focus on himself instead of the game,including CVG and ONM former video game journalist Chris Scullion.

Scullion said, “it has always been my opinion that when a journalist makes themselves the story instead of the game they’re supposed to be covering, they’ve failed at doing their job.” He stated that journalists can write about games personally, citing an article by Christian Donlan that explained how video games help him with multiple sclerosis. However, in Donlan’s article, “the overriding message is still ‘games are amazing’. When you finish reading it you’re more in love with this wonderful hobby than ever.”

Polygon employs scum like Kuchera, pimps every anti-gamer think piece you could think of, then has the nerve to chastise devs as well. Smh.