Hello everyone, let’s get down to business right away this beautiful Monday morning. I’ll skip the intro about what I ate for dinner last night and shit like that (although I will say welcome back, Taker!). Instead, let’s turn our attention once again to The Guardian and Jessica Valenti. You would be forgiven for thinking today’s column was a joke. I’m afraid it’s all too real, though. Here’s the headline:

Lol, golden. The Guardian itself reads almost like The Onion nowadays, and this is just the latest example. Let’s bring you some choice cuts from the column, though:

The comments and lascivious stares from men have faded away the older I’ve gotten, leaving an understandable sense of relief. But alongside that is a slightly embarrassing feeling of insecurity that, with every year that goes by, I become more and more invisible to men…

[A]s much as I wish it didn’t, the thought of not being worth men’s notice bothers me. To my great shame, I assume I must look particularly good on the rarer days that I do get catcalled…

I realize the most properly-feminist response to all of this would be to proudly declare that I don’t care, that being too old to catcall is glorious freedom. But that would be a lie.

Don’t forget about the caption, which was lampooned by the comment section: 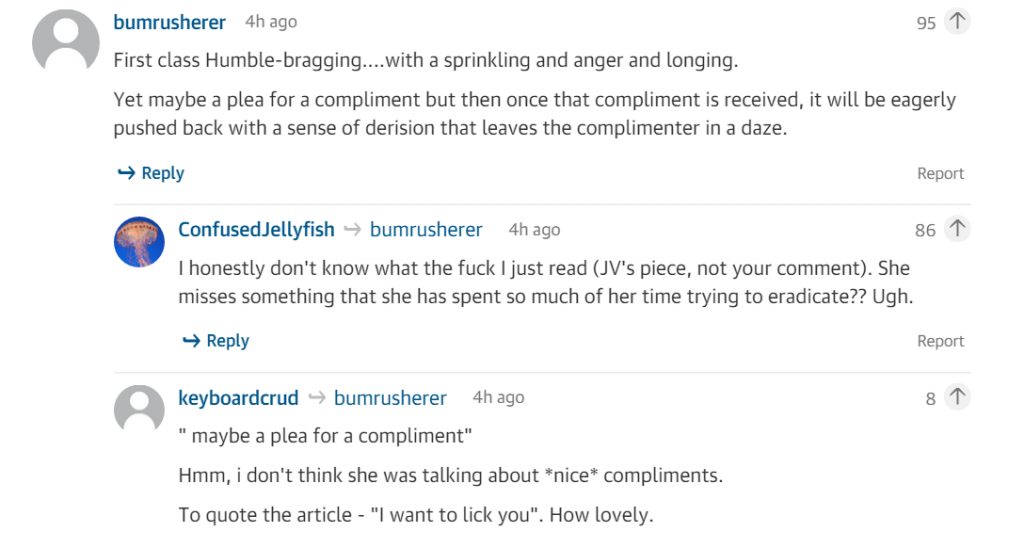 Kudos to the readers there. I always rush down to the comments to have a hearty laugh at Valenti, and they rarely, if ever, let me down. Valenti herself rarely lets me down either. Be sure to feast your eyes on this contradiction as well. Of course she blames all this on men and the “patriarchy,” so to her, I doubt it’s a contradiction:

Also, not how the headline has evolved over the morning. I’m not sure if this is due to Valenti or her editors, but it’s pretty interesting nonetheless. I guess the first one was too bogus even for them:

I’m not the only one to have fun with this one. Vee, with his European ass, already has a video out on the subject:

I’m beginning to wonder if Ms. Valenti isn’t some sort of performance artist. Her latest columns seem like something that would seriously be written for parody (if I haven’t hammered that point home enough already). I guess it doesn’t really matter to her paymasters, so long as the clicks roll in. She’s just another clown in a long line of feminist fuck-ups. But maybe I’m missing the mark? Let me know what you think down below while I go work on this next entry.