I spent about 8 hours total working on my Wii U last night. I wanted to hack it and I finally did. Luckily, I still woke up in time for this doozy of a story. Juan Thompson, a black, Muslim, progressive, “journalist” who was recently fired from The Intercept for making up stories…literally peddling proven fake news…is the guy behind the recent threats against Jewish centers nationwide. The media has spent the last couple days blaming that on Trump supporters, when it turns out it was a member of their own depraved tribe.

Wew lad. It doesn’t get any better than this, does it?

First, some background on Juan Thompson…

Juan Thompson, the St. Louis native whose journalism career crumbled this winter after fabrications were discovered in his stories, resurfaced as a writer for an online news site September 9.

But the new gig also wasn’t to last. Thompson was fired from Media Blackout USA on September 11 after filing just a half-dozen stories, the organization says.

“He didn’t do anything wrong (during) his short stay with us,” Media Blackout wrote in an email to the Riverfront Times. “But we can’t be affiliated with someone who writes fake reports.”
Thompson was the subject of an RFT cover story in February 2015 after he was bounced from a reporting job with The Intercept. Editors for the site, co-founded by Edward Snowden confidante Glenn Greenwald, accused Thompson of inventing quotes and sources in multiple stories.

The worst of it was a supposedly exclusive interview with a cousin of accused killer Dylann Roof after the slaughter of nine members of an historic black church in South Carolina. Investigators at the Intercept, while reviewing Thompson’s work, could find no evidence the cousin exists.

I know we’ve been using the fake news term a lot, but that’s literally what this is. Not putting a spin on something, or slanting coverage…but literally making shit up! I guess he had some deeper issue at play, come to find out. Then again this is what happens when you take the current sick SJW, “progressive” ideology to the extreme.

Preet Bharara, the United States Attorney for the Southern District of New York, William F. Sweeney Jr., the Assistant Director-in-Charge of the New York Field Division of the Federal Bureau of Investigation (“FBI”) and James P. O’Neill, the Commissioner of the New York City Police Department (“NYPD”), announced the unsealing of a complaint charging JUAN THOMPSON with cyberstalking a particular woman (“Victim-1”), by, among other things, communicating threats to Jewish Community Centers (“JCCs”) in Victim-1’s name. THOMPSON was arrested in St. Louis, Missouri, this morning and is expected to be presented there later today.

U.S. Attorney Preet Bharara said: “Everyone deserves to be free from fear and discrimination based on religion, race, or ethnicity; that is fundamental to who we are as a nation. Together with the FBI and the NYPD, we have been investigating the recent threats made on Jewish Community Centers in New York and around the country. Today, we have charged Juan Thompson with allegedly stalking a former romantic interest by, among other things, making bomb threats in her name to Jewish Community Centers and to the Anti-Defamation League. Threats of violence targeting people and places based on religion or race – whatever the motivation – are unacceptable, un-American, and criminal. We are committed to pursuing and prosecuting those who foment fear and hate through such criminal threats.”

FBI Assistant Director-in-Charge William F. Sweeney Jr. said: “Thompson’s alleged pattern of harassment not only involved the defamation of his female victim, but his threats intimidated an entire community. The FBI and our partners take these crimes seriously. I would also like to thank the NYPD and the New York State Police, who continue to work shoulder to shoulder with us as we investigate and track down every single threat and work together to achieve justice for our communities that have been victimized by these threats.”

No wonder the people’s trust in media is at such an all-time low. They want to blow up Jews while selling us on fake news. Also, just check out this guy’s Twitter history. It has to be seen to be believed.

Well, that’s certainly good to know. You can’t be racist if you’re black, but you can be put in federal prison.

Huh. I wonder who would do something like that. Oh yea, that’s right, you (allegedly)! Man, these white supremacist black Muslims are getting out of fucking control.

I’m beginning to think Juan doesn’t like white people. Also, folks like him are rapidly sending white folks running to the right, so I guess he’s doing good work in that regard.

I’m really shocked Juan felt that rioting was justified. Then again, between that and blowing up Jewish kids, one might argue that rioting is the milder alternative.

Trump voters should be “taken out.” Well, at least he’s consistent with many of his compatriots on the left.

Apparently, Juan saved “blow up the Jew” for his private political consultations.

Now, all these tweets are hilarious enough. But Mr. Thompson also allegedly tried to frame his white girlfriend for his string of bomb threats after a nasty breakup. Here’s a selection from the charging documents…

Oh, and he also tweeted about it…because yes, he really is that fucking stupid.

There’s so much here that I don’t think I can even say much more than I already have. This is incredible. I hope all of you have fun with it down in the comments. I might come back and add a few more thoughts to this later, but I think the archives and background on on this loon is more than enough for now.

UPDATE: And just when you thought this story couldn’t get any crazier…a wild otherkin appears. 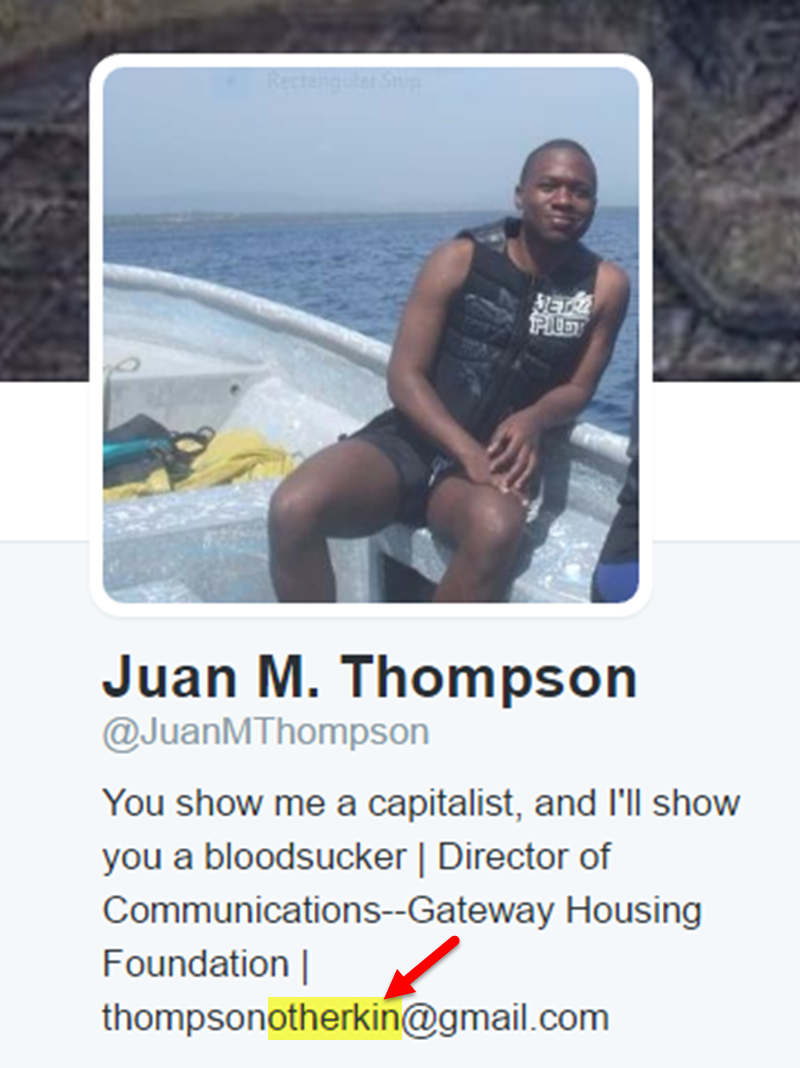