Let’s talk about some new e-drama mixed in with politics this time. A new promising YouTuber named “Fem Fighter (@fem_fighter)”, who makes parody videos on intersectional feminism mixed in with a little bit of cooking to defeat the patriarchy, got one of her videos “stolen”, edited and reposted on Facebook without her knowledge. What’s the big deal about it, you ask? Well, take a look at some of the photographic evidence first.
Total
0
Shares
Share 0
Tweet 0
Pin it 0

Let’s talk about some new e-drama mixed in with politics this time. A new promising YouTuber named “Fem Fighter (@fem_fighter)”, who makes parody videos on intersectional feminism mixed in with a little bit of cooking to defeat the patriarchy, got one of her videos “stolen”, edited and reposted on Facebook without her knowledge.

What’s the big deal about it, you ask? Well, take a look at some of the photographic evidence first.

Her original video was obviously a parody making fun of clueless Hillary voters. The edited video removed the obvious parody parts and made the author simply sound like a clueless Hillary voter herself. The person that reposted it never mentioned the origin of the video or that it was parody. Can you imagine being portrayed publicly as a serious Hillary voter? The shame…

The original YouTube video had only 400 to 500 views before the incident but the stolen recut got 700,000+ views. The young lady that made it, who is in the tech field, lost a lot of potential ad revenue, YouTube subscribers and followers on Twitter.

Here’s my quick interview with the YouTuber…

DISCLOSURE: I have the utmost respect for her personally and professionally, and that we follow each other on Twitter.

Fem Fighter: My channel is of a satirical regressive leftist lunatic, mostly just ranting about random stuff that has been going on either in the media or online, oh and cooking for some reason.

FP: What happened to your video?

FF: It was my very first video, a rant about why people should vote for Hillary. It consisted of the dumbest reasons I could possibly find, was full of contradictions (Planned Parenthood), hypocrisies (see Bill’s serial rape accusations) and other very dumb reasons (she’s a woman). Some (I believe) conservative group took it, edited my introduction and final words, put some music in, added a few silly snippets in whenever I said something stupid, never mentioned I was satire (like I leave in the description) and now it’s being shared by around 728k people (as of now), most of whom think it’s real.

So basically not only am I not getting any credit for having this viral video, but it is being shared around as if it were serious (which is what REALLY bothers me).

FP: Did that change your views on social media?

FF: It hasn’t really changed my mind. I sorta knew it was a risk, and I know it can get toxic, which is why I try to be careful with my content and make sure people know it is in fact satire. But when people edit it and reupload it, without mentioning it’s a satire, it could backfire on me.

FP: How did you learn about it?

FF: I learned about it because a guy told me about it in a YouTube comment and linked it to me. Shortly after, another guy came to say the same thing. Also, take note: I am assuming this is the only re-uploaded version of it. For all we know, there could be more.

FP: How does that make you feel?

FF: It makes me feel a bit frustrated because the original video got only about 500 views, while the other went viral…not to mention that it frustrates me that there are so many people who think I’m being serious.

FP: How did it impact you?

FF: It’s not necessarily about the lost money (I use that as more of a joke), but also because these are 700k people who most likely will not see the rest of my channel. Those could’ve been potential subscribers and viewers for my other stuff.

FP: When was your video originally posted on YouTube?

FP: When was the edited version posted on Facebook?

FP: When did you learn about it?

FP: Can I use your name and picture in the article?

FF: Sure, just call me Fem Fighter and you can use any of the pictures I posted on Twitter.

FP: Sorry to ask but this is Twitter, are you a woman?

FF: And yes, I am a woman (I understand, no problem XD)

FP: If we ever meet, would you make me a sandwich?

FP: OMG! I feel so violated right now! I’ll bet you are an entitled cis white male full of privilege! You are LITERALLY oppressing me, hurting my feelings and perpetuating rape culture. Stay in your lane, go educate yourself and die or something…

This is an example of Poe’s law in action. Without clear indicators that a statement is parody, there is virtually no way to distinguish it from an extreme or uninformed one. Fem Fighter put down some clear trigger warnings that this was satire but with those warnings removed, people tend to think the content is true and serious, reflecting their pejorative views on people that have opposing opinions. Just removing the warnings wasn’t enough for the content thief, he has to re-edit the video to make it sound even more absurd. 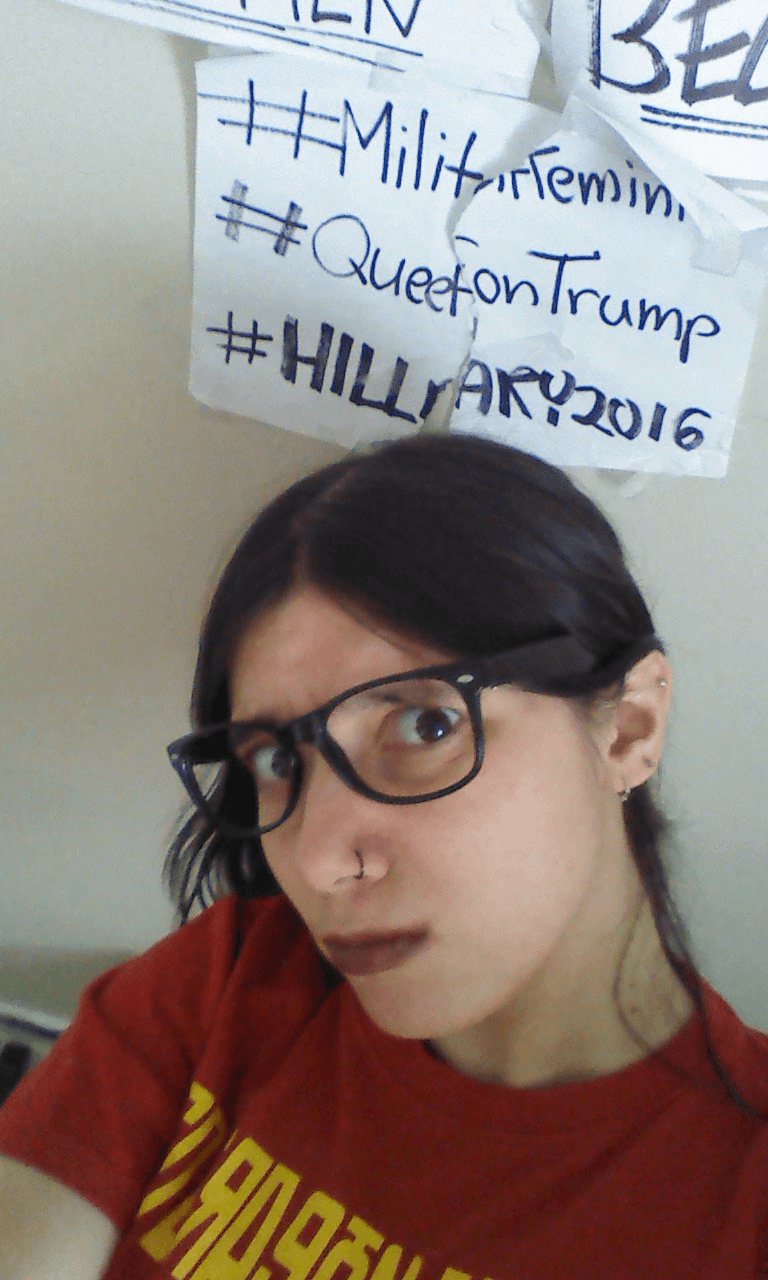 So they turned an obvious parody into an attack add. Is that the best that Hillary’s opponents really got? Was it really necessary to beat on dead horse (face) anyway?